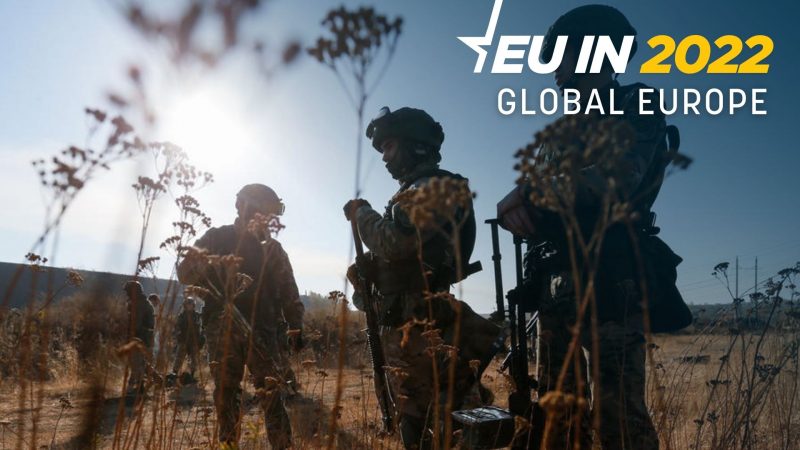 The flare-up of tensions between Russia and the West over its military build-up around Ukraine is likely to become a litmus test for EU foreign policy in early 2022. [EPA-EFE/DAVE MUSTAINE]

In 2022, EU foreign policy looks towards some fire fighting to salvage what is left of the once-dominant dream of building a ‘ring of friends’ from the Caucasus to the Sahara.

Over the past year, Europe has woken up to the return of geopolitics, whether in Belarus, an increasingly revisionist Russia, or China’s coercive trade threats towards Lithuania and others.

“Geopolitical changes have intensified with power politics repeatedly challenging the EU and its values,” EU’s chief diplomat Josep Borrell said in his end of the year blog post, adding the bloc “must respond with all the determination we can muster”.

But 13 years on from the launch of the European Neighbourhood Policy (ENP) and the Mediterranean Union, the ‘ring of fire’ in the EU’s troubled neighbourhood has not been put out on its eastern and southern flanks just yet.

The flare-up of tensions between Russia and the West over its military build-up around Ukraine will likely become a litmus test for EU foreign policy in early 2022. However, this is big game, and Putin’s interlocutor is no other but Joe Biden.

“We do not want to and must not be an uninvolved spectator, with decisions being made over our heads,” Borrell said in a recent interview, where he added US Secretary of State Antony Blinken shares a similar view.

Russia has made bold ultimatums to NATO and the West, while it appears they were aware the answer would most likely be “no”.

EU diplomats believe the proposals are intended to distract from the situation around Ukraine and, with the demands going to the maximum possible betting, are not designed to be accepted, but rather restore Russia as being treated as an equal negotiation partner.

Moscow also clearly does not count on an EU role in the upcoming talks with US and NATO over Europe’s security architecture.

Russia’s veteran foreign minister Sergey Lavrov only deepened the notion by declaring countries of Central and Eastern Europe as “territories orphaned by the collapse of the Warsaw Treaty Organisation and the Soviet Union”. Not sovereign, independent or free, but ‘unowned’.

“The Russian ‘salami-tactics’ to sideline the EU are something Putin has been trying with us since forever,” an EU official told EURACTIV ahead of the upcoming January security talks.

However, the EU official pointed out, that with former German Chancellor Angela Merkel and former French counterpart Nicholas Sarkozy gone – both having been perceived by Putin as leaders he could ‘do business with’ – and his domestic track record stretched over the Navalny poisoning and the Memorial crackdown, the EU could push back, aided by Washington.

Next to Ukraine, the two other ‘Associated Trio’ partners and EU hopefuls, Georgia and Moldova, face the presence of Russian troops against the will of their legitimate governments. Although asking for more commitments, they are unlikely to join the bloc any time soon.

Although the majority of EU member states publicly reject the idea of a Russian veto or ‘sphere of influence’ over the former Soviet republics, insisting they should be free to choose their own strategic alignments, several EU diplomats and senior government officials admit that no one in Brussels currently can envisage Ukraine or Georgia joining the bloc.

Belarus’s long-serving strongman Alexander Lukashenko is still in power, having added an escalating border crisis with migrants trapped at Europe’s doorstep to the EU’s headaches. Existing EU sanctions on his regime would need to be better coordinated with Europe’s allies to fill the existing loopholes.

Armenia and Azerbaijan fought a six-week war in 2020 over the disputed Nagorno-Karabakh region, with occasional flare-ups and repeated deadly border skirmishes reoccurring.

For the Western Balkans, Borrell pointed out that “increasing divisive rhetoric and actions in the region, especially in Bosnia and Herzegovina, have hampered efforts to bring the six countries closer to their European future.”

In fact, despite the Western Balkans having been brought back to the EU’s agenda, brokered by the Slovenian EU presidency, enlargement remains on life support.

Strangely, it is among the EU neighbours who do not nuture ambitions to join the EU, namely in Central Asia, that the EU soft power appears to work adequately.

In the Southern Neighbourhood, the EU has still not found a solution to migrants dying in the Mediterranean, and relations with Turkey can not be described as anything other than frozen. Beyond, lies the aftermath of Afghanistan and several conflicts in Africa raise concerns in Brussels, with the Sahel deteriorating and the Ethiopian civil war escalating.

Any need to manage the influx of hundreds of thousands of refugees from the Middle East, Asia and Africa could likely take precedence over investing more into its near neighbourhood, EU diplomats fear.

EURACTIV has spoken to many EU officials and diplomats over the past few months. Most of them agree that the EU’s challenges need to be addressed jointly, but member states’ different domestic priorities have so far hampered the push for a common EU foreign policy.

The main challenge for next year will be to provide clarity on the EU’s objectives on the one hand and how to make member states ‘buy-in’.

The EU’s upcoming Strategic Compass, the closest the bloc can come to a military strategy, is meant to cover security risks and trends across the bloc and worldwide and serve as an operational guide on decision-making on security and defence issues.

The final version is set to be approved in March, during France’s EU Council presidency, with the first-ever European Defence Summit to follow.

But with French President Emmanuel Macron focused on his reelection campaign, some in Brussels fear the process could become trapped in a push for more French security objectives.

Several member states have reservations about its cost, to the fact it doesn’t adequately address Russia’s assertive behaviour in Europe’s backyard, or that it could potentially duplicate NATO efforts.

Some EU diplomats contacted by EURACTIV said they’re worried about “adding more new tools, while not using the potential of existing ones.”

“Establishing the trust that this document is not yet another paper tiger or power grab from the Commission in the interest of the bigger over, the smaller member states cannot be done by March,” one EU diplomat bluntly said.

“It needs more visible actions on the crisis we are currently facing, only that can convince member states the EU is serious about actually addressing its burning surroundings, “the diplomat added.