The report, published on Sunday (9 July) by the New York Times, puts Trump in jeopardy after his first meeting with Russian President Putin left the impression the two get along well.

According to the report based on information from three advisers to the White House, Trump’s then-campaign chairman, Paul Manafort, and his son-in-law, Jared Kushner, also attended the meeting at Trump Tower on 9 June 2016, two weeks after Trump won the Republican nomination.

In a statement quoted by the New York Times and later made available to other media outlets, Donald Trump Jr. acknowledged meeting with Russian lawyer Natalia Veselnitskaya.

“After pleasantries were exchanged, the woman stated that she had information that individuals connected to Russia were funding the Democratic National Committee and supporting Ms. Clinton,” the statement said. Clinton was the 2016 Democratic presidential nominee.

“Her statements were vague, ambiguous and made no sense. No details or supporting information was provided or even offered. It quickly became clear that she had no meaningful information.”

Trump Jr. said Veselnitskaya then turned the conversation to the adoption of Russian children and a US law blackisting Russians linked to alleged human-rights abuses.

President Trump was “not aware of and did not attend” the meeting, Mark Corallo, a spokesman for Trump’s legal team, said in an emailed statement.

Trump Jr. said he was asked to attend the meeting “with an individual who I was told might have information helpful to the campaign” at the request of an acquaintance he knew from the 2013 Miss Universe pageant.

“I asked Jared and Paul to attend, but told them nothing of the substance,” he said.

“The meeting lasted approximately 20 to 30 minutes,” he said. “As it ended, my acquaintance apologised for taking up our time. That was the end of it and there was no further contact or follow-up of any kind. My father knew nothing of the meeting or these events.”

The New York Times report said Trump Jr. was promised damaging information about Clinton before agreeing to meet with the lawyer. It cited three advisers to the White House briefed on the meeting and two others with knowledge of it.

The Times first reported on the meeting on Saturday, after which Trump Jr. issued a statement confirming that it took place, but made no mention of the Clinton aspect.

Representatives for Manafort and Kushner did not respond to requests for comment.

Allegations of the Trump campaign’s ties to Russia have cast a shadow over Donald Trump’s first five months in office.

A federal special counsel and several congressional committees are investigating possible contacts between the campaign and Russian representatives as part of a larger probe into allegations that Moscow meddled in the election.

The June meeting was the first confirmed private meeting between members of the president’s inner circle and a Russian national, the New York Times reported, citing confidential government records and interviews with people familiar with the documents.

The revelations come after Trump and Putin discussed the allegations of election meddling during the summit of leaders from the Group of 20 major economies in Hamburg, Germany.

Putin said on Saturday he thought Trump had been satisfied with his assertions that Russia had not meddled in the US presidential election.

Speaking at the end of a G20 summit in Germany where the two leaders met face-to-face for the first time, Putin said he believed he had been able to establish a personal relationship with Trump, and that the initial groundwork had been laid for an improvement in US-Russian ties.

Their meeting, on the sidelines of the Hamburg summit, was subject to intense scrutiny, following allegations that Moscow had tried to help Trump win the White House.

Putin was pressed by reporters at a news conference to share details of the discussion he had with Trump about alleged Russian election interference. Russia has denied trying to influence the US election.

Told ya. They're calling it #G20 "Photo of the Day."
This will be Russian state media's fave pic in covering #TrumpPutinMeeting.#TrumpPutin pic.twitter.com/R3690gfQ8y

“(Trump) asked a lot of questions on this subject. I, in as much as I was able, answered these questions. It seems to me that he took these (answers) on board and agreed with them, but in actual fact, it’s best to ask him how he views this,” Putin told one reporter.

Pressed again later in the same news conference by reporters about what precisely Trump had told him, Putin said: “He started to ask pointed questions, he was really interested in particular details. I, as much as I could, answered him in a fairly detailed way.

“I believe it would not be entirely appropriate on my part to disclose details of my discussion with Mr Trump. He asked, I answered him. He asked pointed questions, I answered them. It seemed to me that he was satisfied with those answers,” Putin said.

Putin also spoke warmly of Trump’s personal qualities. The two men have spoken by telephone since Trump won the US presidential election last year, but had not met until the G20 summit in Hamburg. 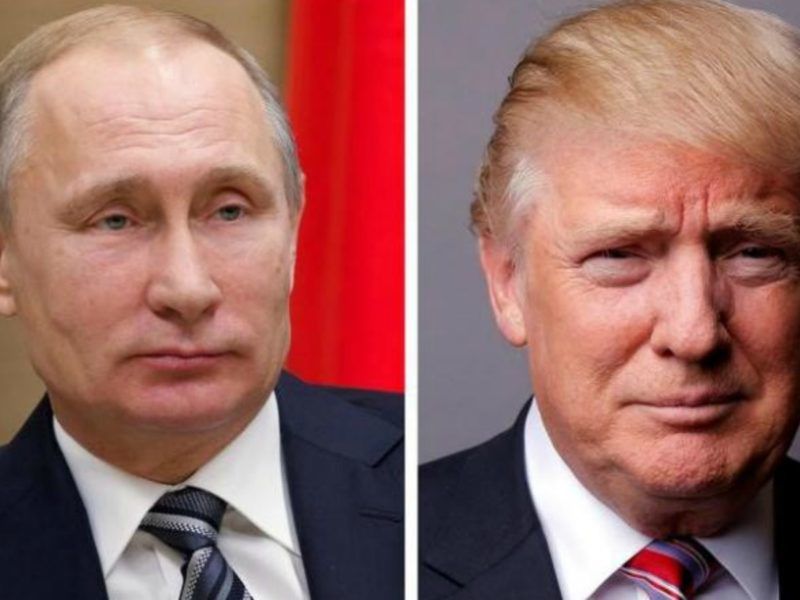 US President Donald Trump and Russian President Vladimir Putin yesterday (2 May) moved to ease the tension from US air strikes in April against Russian ally Syria, expressing a desire for a Syrian ceasefire and safe zones for the civil war’s refugees.

“I believe that we have established personal relations already,” Putin told a news conference.

“The TV Trump is very different from the person in reality. He is absolutely precise, he reacts as you would expect to his interlocutor, he analyses fairly quickly, answers questions that are put to him.

“It seems to me that if we build our relations the way that our conversation went yesterday, then we all have grounds to believe that we can, at least in part, restore the level of cooperation that we need,” Putin said.

He said in particular that the Trump administration was taking a more pragmatic stance on the conflict on Syria. A ceasefire deal for southern Syria that was announced during the summit was the result of that new approach, Putin said, and represented a “breakthrough”.

POTUS about to leave #G20 without holding full news conference. Merkel, Putin and others took questions at end of summit. But not Trump.

Trump said in a tweet on Sunday that he discussed with Putin forming a cyber security unit to guard against election hacking.

Putin & I discussed forming an impenetrable Cyber Security unit so that election hacking, & many other negative things, will be guarded..

…and safe. Questions were asked about why the CIA & FBI had to ask the DNC 13 times for their SERVER, and were rejected, still don't….

…have it. Fake News said 17 intel agencies when actually 4 (had to apologize). Why did Obama do NOTHING when he had info before election?

Tweeting after his first meeting with Putin on Friday, Trump said now was the time to work constructively with Moscow.

“Putin & I discussed forming an impenetrable Cyber Security unit so that election hacking, & many other negative things, will be guarded and safe,” he said following their talks at the G20 summit in Hamburg, Germany.

Trump said he had raised allegations of Russian interference in the 2016 US presidential election. “I strongly pressed President Putin twice about Russian meddling in our election. He vehemently denied it. I’ve already given my opinion…..”

He added: “We negotiated a ceasefire in parts of Syria which will save lives. Now it is time to move forward in working constructively with Russia!”

Trump he is so incoherent, hypocritical and self-contradictory: He literally makes no sense. https://t.co/xzJsyMQ9cj via @USATOpinion