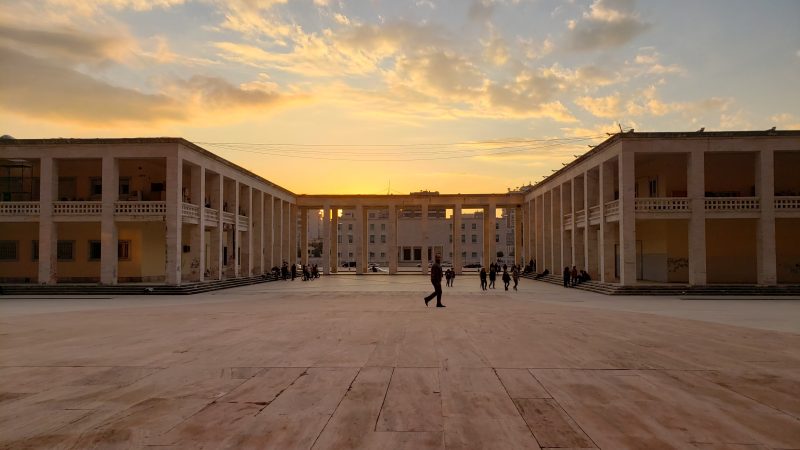 Researcher and academic Flora Ferati-Sachsenmaier first sounded the alarm on the “administrative ethnic cleansing” of Albanians in the region through an op-ed published on Exit.al. The revelation was the result of almost a decade of work into the issue. [Alice Taylor]

The phenomenon peaked in 2015 when some 67,000 Albanians applied in just one year.

Compared to its fellow non-EU neighbours, Albania’s figures stick out like a sore thumb. In 2020, it had more first-time asylum applications to EU countries than Serbia, North Macedonia, and Kosovo combined. Figures for Montenegro and Bosnia and Herzegovina were just a fraction of Albania’s total.

While the flow has somewhat decreased compared to 2015, Albania is still one of the world’s leading contributors to EU asylum claims and the second in Europe behind Turkey. Between April 2020 and April 2021, Albania contributed 4,750 first-time applicants, not considering second-time applicants and those lodging appeals.

In the UK, 2019 saw just under 4,000 applications for asylum from Albanians, alongside 6,298 pending requests due to be decided on. In the same year, 279 received asylum. In 2020, Albania was in the top five for asylum requests in the UK, with 3,071 requests in the first instance. Some 38% were successful in their claim.

In terms of asylum applications, it ranks alongside Iran, Senegal, and the Democratic Republic of the Congo, and this doesn’t bode well for the Western Balkan nation.

Albania has been consistently asked to step up efforts against “illegal immigration and unfounded asylum seekers”, but things are hardly improving. A survey published in June 2020 by the Regional Cooperation Council, an intergovernmental body in southeast Europe, found that almost half of Albanians are actively planning to leave the country.

This means they are looking for jobs, applying for visas, or preparing to leave. Over 60% want to leave, according to 2019 figures published by Gallup.

The main contributors to Albania’s ‘brain drain’ are the lack of jobs, low wages, widespread corruption, and the weak rule of law. Successive Albanian governments have failed to tackle these problems since the fall of communism.

For those wanting to leave, there are several options available: They can secure a job and apply for a visa, emigrate illegally, or apply for asylum.

Landi, 28, was one of those who travelled illegally. He chose to pay €2,000 to be transported through Europe and into the UK inside the cabin of a lorry.

“I planned to go and work and send money home to my family. But I got caught. Now I cannot enter the UK for five years. I cannot support my wife and two children on €250 a month,’ he told EURACTIV.

Albania’s minimum wage is the lowest in Europe at just €242 a month, with many forced to work for less in the country’s flourishing informal economy.

Others opt for asylum. Across the EU, the average rate of approval for Albanian asylum seekers is 4%. While it might not seem much, it still amounts to hundreds of approved applications every year.

The country still grapples with blood feuds and revenge killings, domestic abuse, and so-called honour-based violence. It is also a top country of origin for the trafficking of women and girls.

A 2020 interview with Petya Nestorova, the executive secretary of the Council of Europe Convention on Action against Trafficking in Human Beings (GRETA), highlighted the risks of sending victims of crime back to Albania.

“It’s important to consider all of the risks before sending them back to Albania…In France, women have been granted asylum after being trafficked because returning to Albania is seen as carrying risks… this should be used more,”  she said, adding that “returning women to places where they will be ostracised is not a way to combat human trafficking.”

Statistics from VATRA, an Albanian NGO that works with trafficked women and girls, said that more than a half are rejected by their families upon return. Every year, women and girls are at risk of being re-trafficked or driven into the hands of criminals due to poverty.

Another worrying trend is the apparent increase in unaccompanied Albanian children seeking asylum. An Albanian child rights organisation, CRCA/ECPAT, recently sounded the alarm over more than 60,000 minors who have applied for asylum outside the country during the last 10 years. This is equivalent to one in ten of all under-18s in Albania.

“During the last 10 years, the numbers of children from Albania requesting asylum have increased exponentially, creating a generation of unaccompanied children, vulnerable to violence, exploitation, slavery, and crime,”  they said in an open letter, calling on Parliament to open an inquiry into the status and whereabouts of the missing children.

According to the European Commission, Albania is considered a ‘safe country of origin’, which – broadly –  means there is generally no persecution, inhuman treatment, punishment, or risk of indiscriminate violence.

But despite this, a number of asylum cases are being approved.

EURACTIV spoke to an expert country witness who provided information on Albania to the UK Home Office and in court cases for more than 20 years. The expert described the numbers and reasons why Albanians are applying for asylum abroad.

“I see shifts in numbers and reasons for asylum claims. In the 90s, it was those fleeing blood feuds. They have decreased gradually over the years, but I still saw 10 such cases in 2020. Trafficking of women, those fleeing planned marriages, and being trafficked into prostitution is the category with the most cases. About one third were successful in claiming asylum.”

“There are many other reasons I have seen for seeking asylum; severe domestic violence, specialist health issues, fleeing loan sharks, police mistreatment, and attacks due to political affiliation,” the expert added.

Contacted by EURACTIV, a spokesperson for migration at the European Commission said Albania has put in place measures to address the issue of asylum applications lodged by its nationals.

These measures include “tighter checks at border crossing points, thorough exit interviews, information on the rights and obligations linked to visa-free travel, and close cooperation with member states of destination.”

The spokesperson added that the number of applications lodged by Albanian nationals had been continually decreasing over the past five years, from 27,545 in 2016 to 6,970 in 2020.

However, many citizens and those on the ground are concerned that little is being done to tackle the root of the problem. This includes poverty, corruption, and, as highlighted in the latest US State Department Report, the failure to meet the minimum standards to eliminate human trafficking and protect victims.