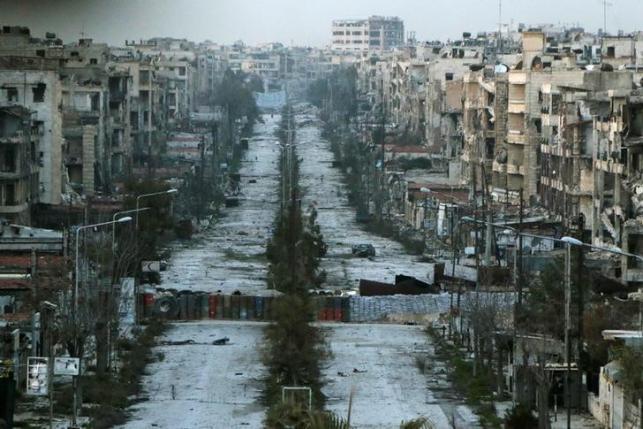 Syrian government forces and their allies fought insurgents near Aleppo yesterday (9 May) and jets conducted raids around a nearby town seized by Islamist rebels, a monitoring group said, as Syria’s military said a ceasefire in Aleppo would be extended by 48 hours starting today.

A recent surge in bloodshed in Aleppo, Syria’s largest city before the war, wrecked the 10-week-old, partial truce sponsored by Washington and Moscow that had allowed UN-brokered peace talks to convene in Geneva.

The United States and Russia announced plans for a “cessation of hostilities” in Syria that would take effect on Saturday (27 February) but exclude groups such as Islamic State and the al-Nusra Front, a loophole Syrian rebels immediately highlighted as a problem.

The United States and Russia, which support rival sides in the civil war, said they would work to revive the February “cessation of hostilities” agreement that reduced fighting in parts of the country for several weeks.

US Secretary of State John Kerry said all parties had to press the sides they back to turn “words on a piece of paper” into actions to reinstate the truce.

Syria’s military high command was quoted by state news agency SANA as saying the Aleppo ceasefire would be extended by 48 hours in the northern city beginning at 1 a.m. local time on Tuesday (6 p.m. ET on Monday).

A number of short-term local truces have been in place since April 29, first around Damascus and northern Latakia and then in Aleppo, but there has still been fighting between rebels and government forces.

The cessation of hostilities and local truces do not include Islamic State or al Qaeda’s Syrian branch, the Nusra Front.

Asaad al-Zoubi, the chief negotiator for the main Syrian opposition at the Geneva talks, criticized the extended Aleppo truce, telling Al Jazeera television that such measures served only to allow thousands of reinforcing troops to be sent from Iran, which is supporting Syrian President Bashar al-Assad.

Russia and the United States said in a joint statement they would step up efforts to persuade the warring parties to abide by the ceasefire agreement.

“We have decided to reconfirm our commitment to the (ceasefire) in Syria and to intensify efforts to ensure its nation-wide implementation,” they said. “We demand that parties cease any indiscriminate attacks on civilians, including civilian infrastructure and medical facilities.”

Visiting Paris, Kerry said a reduction of violence in line with the US-Russian joint statement depended on field commanders as well as interested parties including the United States.

Basma Kodmani, a member of the opposition High Negotiations Committee, expressed hope of a return to the Geneva peace talks if the US-Russian agreement is swiftly implemented.

Russia’s military intervention last September helped Assad reverse some rebel gains in the west of the country, including in Aleppo province.

But insurgents captured the town of Khan Touman last week, inflicting a rare setback on government forces and allied Iranian troops who suffered heavy losses in the fighting. Several Iranian soldiers were captured in the clashes, a senior Iranian lawmaker said on Monday.

The city of Aleppo is one of the biggest strategic prizes in a war now in its sixth year, and has been divided into government and rebel-held zones through much of the conflict.

The Observatory said warplanes struck rebel-held areas of the city early on Monday, and rebels fired shells into government-held neighborhoods.

Al Manar, the television channel of Damascus’s Lebanese ally Hezbollah, said on Monday troops had destroyed a tank belonging to insurgents and killed some of its occupants.

On the eastern edge of Damascus, government forces and their allies shelled rebel areas and clashed with insurgents, the Observatory and the rebel force Jaish al-Islam said. Three people were killed and 13 wounded in air strikes on Idlib, it said.

Jaish al-Islam agreed with a rival rebel group, Failaq al Rahman, that both would vacate a town they have been fighting over for almost two weeks, the Observatory said.

The groups, two of the strongest operating in the area, agreed to make no more attempts to occupy the town of Misraba in the Eastern Ghouta suburb of Damascus, and return it to civilian rule. After 13 days of heavy artillery exchanges, Jaish al Islam took control of the town over the weekend, capturing around 50 rival fighters.

Saudi Arabia condemned air strikes on a camp for displaced Syrians west of Aleppo last week that killed at least 28 people, saying it was part of “the genocide committed by Bashar al-Assad’s forces against civilians in Syria.”

A Saudi cabinet statement on Monday said the strikes on the camp, alongside the prevention of humanitarian aid deliveries to Syrians, constituted war crimes. Damascus has denied targeting the camp or obstructing aid deliveries.

French Foreign Minister Jean-Marc Ayrault, hosting a meeting in Paris of Assad’s opponents, said Syrian government forces and their allies had bombarded hospitals and refugee camps. “It is not Daesh (Islamic State) that is being attacked in Aleppo, it is the moderate opposition,” he said.

The US-Russian joint statement said Moscow would work with Syrian authorities “to minimize aviation operations over areas that are predominantly inhabited by civilians or parties to the cessation.”

US confused over Russia’s real intentions in Syria

Russia’s latest military moves in Syria have sharpened divisions within the US administration over whether Russian President Vladimir Putin genuinely backs a UN-led initiative to end the civil war or is using the negotiations to mask renewed military support for Syrian President Bashar Assad.

One response to “Aleppo fighting rages as US, Russia try to revive Syria truce”