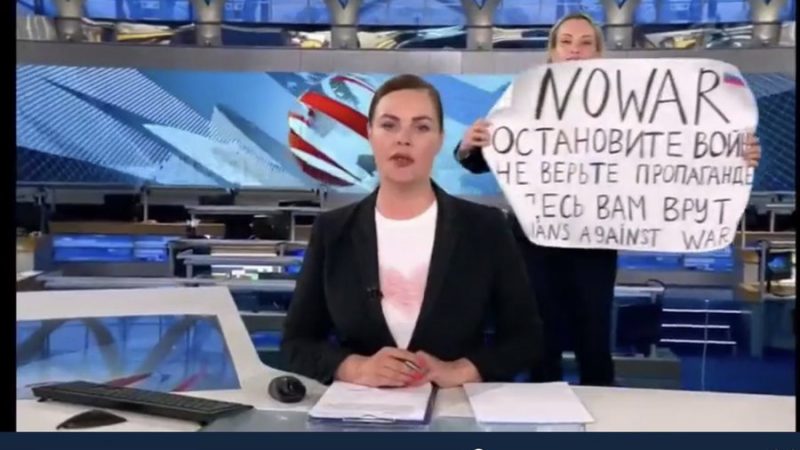 Journalist Marina Ovsyannikova interrupted a live news bulletin on Russia's state TV Channel One on Monday (14 March), holding up a sign behind the studio presenter and shouting slogans denouncing the war in Ukraine. The sign, in English and Russian, read: "NO WAR. Stop the war. Don't believe propaganda. They are lying to you here." [Screenshot]

An anti-war protester interrupted a live news bulletin on Russia’s state TV Channel One on Monday (14 March), holding up a sign behind the studio presenter and shouting slogans denouncing the war in Ukraine.

The sign, in English and Russian, read: “NO WAR. Stop the war. Don’t believe propaganda. They are lying to you here.” Another phrase, which looked like “Russians against war”, was partly obscured.

The extraordinary act of dissent took place on day 19 of the war which began when Russian President Vladimir Putin ordered the invasion of Ukraine on 24 February in what he called a special military operation.

“Stop the war. No to war,” the woman protester could be heard shouting, as the news anchor continued to read from her teleprompter.

The protester could be seen and heard for several seconds before the channel switched to a different report to remove her from the screen.

“I am grateful to those Russians who do not stop trying to convey the truth. To those who fight disinformation and tell the truth, real facts to their friends and loved ones,” Zelenskyy said. “And personally to the woman who entered the studio of Channel One with a poster against the war.”

She posted a video of the incident, which quickly racked up more than 2.6 million views.

State TV is the main source of news for many millions of Russians, and closely follows the Kremlin line that Russia was forced to act in Ukraine to demilitarise and “denazify” the country, and to defend Russian-speakers there against “genocide”. Ukraine and most of the world have condemned that as a false pretext for an invasion of a democratic country.

The woman was named by OVD-Info, an independent protest-monitoring group, and by the head of the Agora human rights group, as Marina Ovsyannikova, an employee of the channel.

The presenter at the Russian state television was speaking about Belarus-Russia collaboration, when a woman just ran onto the stage with a sign that said, “Stop the war! Don’t believe propaganda! They’re lying to you here!” pic.twitter.com/MHQFMbQfom

Pavel Chikov, head of Agora, said Ovsyannikova had been arrested and taken to a Moscow police station. Tass news agency said she may face charges under a law against discrediting the armed forces, citing a law enforcement source.

The law, passed on 4 March, makes public actions aimed at discrediting Russia’s army illegal and bans the spread of fake news or the “public dissemination of deliberately false information about the use of the Armed Forces of the Russian Federation”. The offence carries a jail term of up to 15 years. 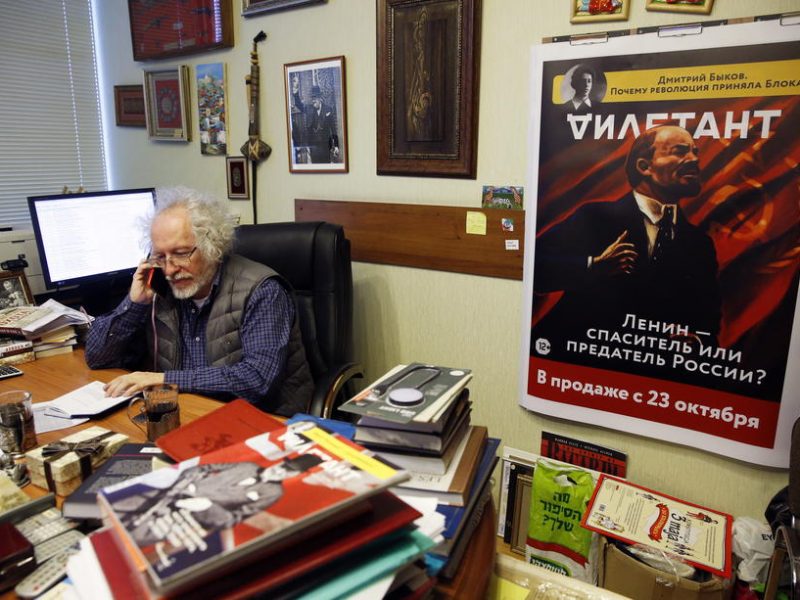 In a video recorded before the incident and posted online, a woman who appeared to be Ovsyannikova described herself as a Channel One employee and said she was ashamed to have worked for years spreading Kremlin propaganda. She said her father was Ukrainian, and her mother Russian.

Marina Ovsyannikova, the woman who ran onto a live state TV news broadcast, even recorded a message beforehand. In it, she says her father is Ukrainian. She calls for anti-war protests, says she’s ashamed about working for Kremlin propaganda, and she denounces the war absolutely. pic.twitter.com/nOpUY9bH74

“What is happening now in Ukraine is a crime, and Russia is the aggressor country. The responsibility for that aggression lies on the conscience of only one man, and that man is Vladimir Putin,” she said.

“Now the whole world has turned away from us and the next 10 generations of our descendants will not wash away the shame of this fratricidal war,” she said.

She urged Russians to go out and demonstrate.

Authorities have broken up anti-war protests. According to OVD-Info, which monitors protests and provides legal assistance to those detained, a total of 14,911 people have been arrested.