As Europe reels, US braces for staggering virus death toll 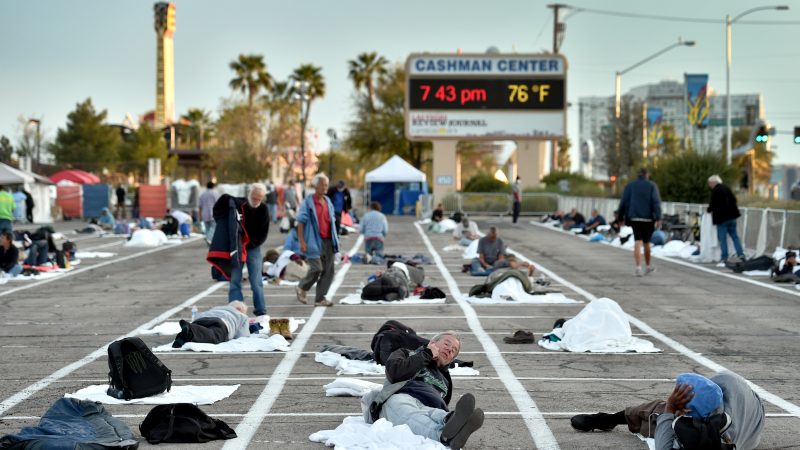 People sleep at a temporary homeless shelter set up in a parking lot at Cashman Center amid the coronavirus pandemic in Las Vegas, Nevada, USA, 31 March 2020. Local officials opened the makeshift shelter after another local shelter closed when a homeless man staying there tested positive for COVID-19. [David Becker/EPA/EFE]

Americans were told Tuesday (31 March) to brace for “very painful” weeks ahead in a worsening coronavirus pandemic projected to claim up to a quarter million US lives, as fatalities spiked in European hotspots Spain, France and Britain.

With more than 42,100 already killed by the disease barrelling around the globe, the United States registered a record 865 deaths in 24 hours — taking its death toll to 3,873.

As field hospitals sprouted in the US outbreak’s epicenter New York City, Trump said he was extending social distancing and stay-at-home orders for another 30 days.

“This is going to be a very painful — a very, very painful — two weeks,” the president said at the White House as he described the pandemic as “a plague.”

“I want every American to be prepared for the hard days that lie ahead.”

In a matter of months, the virus has infected more than 857,000 people in a crisis hammering the global economy and transforming the daily existence of some 3.6 billion people told to stay home under lockdowns.

Deaths shot up again across Europe. While there are hopeful signs that the spread of infections is slowing in hardest-hit Italy and Spain, more than 800 died overnight in both countries.

But members of Trump’s coronavirus task force offered a grim forecast of between 100,000 and 240,000 US deaths in coming months, taking into account current mitigation efforts.

“As sobering a number as that is, we should be prepared for it,” Anthony Fauci, the nation’s top infectious disease expert, said with Trump at his side when asked about the lower figure of 100,000.

But Fauci said mitigation was “actually working” and that authorities are doing everything they can to get the death toll “significantly below that.”

With hospitals direly overstretched, lockdowns have been extended despite their crushing economic impact.

In Belgium a 12-year-old girl died in another worrying case of a youth succumbing to the disease.

France joined the US with a surge to 3,525 deaths, an official toll that includes only those who died in hospital and not those who perished at home or in seniors’ homes.

The inundation of patients has sent health facilities worldwide into overdrive.

Emergency hospitals are popping up in event spaces while distressed medical staff make grim decisions about how to distribute limited protective gear, beds and life-saving respirators.

In scenes previously unimaginable in peacetime, around a dozen white tents were erected to serve as a field hospital in New York’s Central Park.

While many companies and schools around the globe have shifted to teleworking and teaching over video platforms, huge swaths of the world’s workforce cannot perform their jobs online and are now lacking pay and face a deeply uncertain future.

Food banks in New York City have seen a huge rise in newcomers struggling to feed their families.

“It is my first time,” Lina Alba, a cleaner at a Manhattan hotel that closed two weeks ago, said from a food distribution center.

“We need the help now. This is crazy,” said Alba, a 40-year-old single mother of five.

Three quarters of Americans are now under some form of lockdown, while off the Florida coast a coronavirus-stricken cruise ship and its sister vessel are pleading for somewhere to dock after four passengers died on board.

The extraordinary economic and political upheaval spurred by the virus is opening new fronts for cooperation and conflict.

In virtual talks Tuesday, finance ministers and central bankers from the world’s 20 major economies pledged to address the debt burden of low-income countries and deliver aid to emerging markets.

Last week G20 leaders said they were injecting $5 trillion into the global economy to head off a feared deep recession. 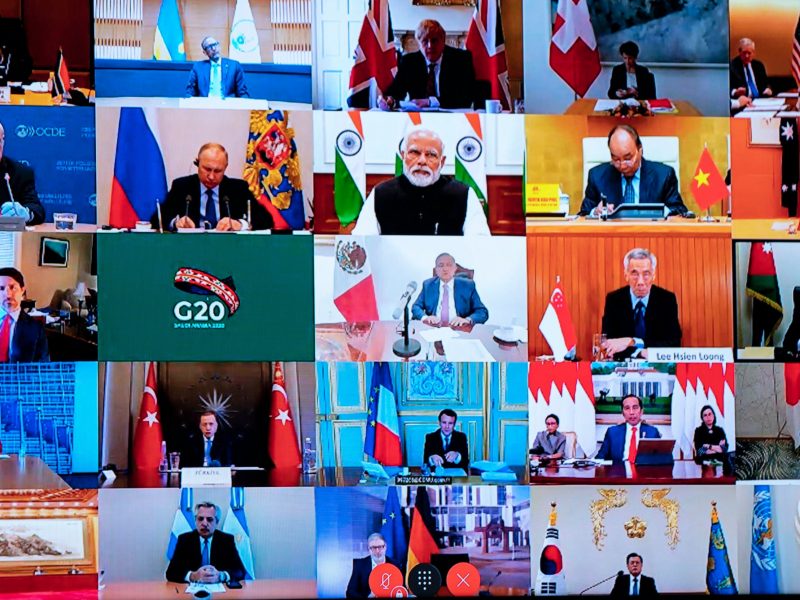 Leaders of the Group of 20 major economies pledged on Thursday (26 March) to inject over $5 trillion into the global economy to limit job and income losses from the coronavirus and “do whatever it takes to overcome the pandemic.”

In the European Union, however, battle lines have been drawn over the terms of a rescue plan.

Worst-hit Italy and Spain are leading a push for a shared debt instrument — dubbed “coronabonds.”

But talk of shared debt is a red line for Germany and other northern countries, threatening to divide the bloc.

The economic pain of lockdowns is especially acute in the developing world.

In Tunisia several hundred protested a week-old lockdown that has disproportionately impacted the poor.

“Nevermind coronavirus, we’re going to die anyway! Let us work!” shouted one protester in the demonstration on the outskirts of the capital Tunis.

Africa’s biggest city Lagos entered its first full day of a two-week shutdown — containment will be especially tough in the megacity’s packed slums, where many rely on daily wages to survive.

“There is no money for the citizens,” engineer Ogun Nubi Victor, 60.

“People are just sitting at home, with nothing to eat.”

While much of the world shuts down, the ground-zero Chinese city of Wuhan has begun reawakening in recent days, giving the bereaved the first chance in months to bury their dead.