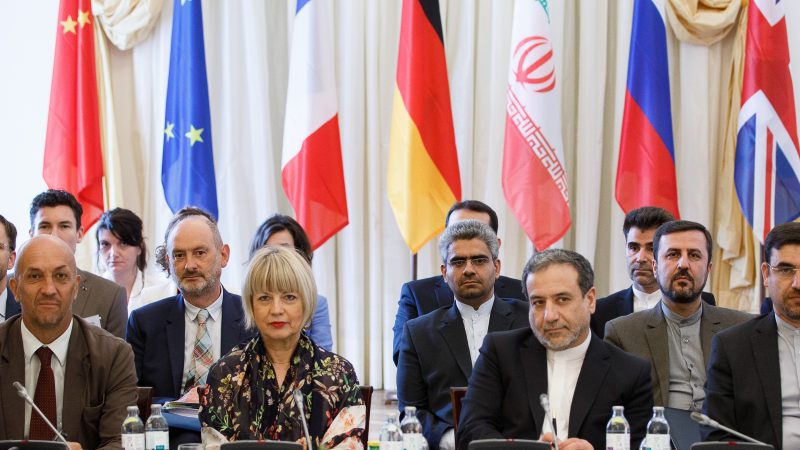 Envoys from Britain, France, Germany, China, Russia and Iran gathered for talks in the Austrian capital on Sunday (28 July), a month after a similar meeting failed to achieve a breakthrough to salvage the fragile nuclear accord.

The emergency meeting with parties to Iran’s 2015 nuclear deal with major powers was “constructive”, Iranian official Abbas Araqchi said on Sunday (28 July), but said Tehran would continue to reduce its nuclear commitments if Europeans failed to salvage the pact.

Iran on Sunday condemned Britain’s seizure of an Iranian oil tanker as a breach of an ailing 2015 nuclear deal, after remaining parties to the accord met in Vienna in a bid to keep it alive.

British authorities had detained an Iranian tanker off the UK overseas territory of Gibraltar in early July on allegations it was breaching EU sanctions on Syria.

A British-flagged tanker was then impounded by Iran’s Revolutionary Guards with its 23 crew aboard in the Strait of Hormuz on 19 July, which was seen by the UK as a tit-for-tat move.

In comments to journalists after the meeting in Vienna, Iranian Deputy Foreign Minister Abbas Araghchi linked the tanker row to discussions over the nuclear deal, formally known as the Joint Comprehensive Plan of Action (JCPOA).

“Since Iran is entitled to export its oil according to the JCPOA, any impediment in the way of Iran’s export of oil is actually against the JCPOA,” Araghchi said.

He added that the issue of Iran’s oil exports – including US attempts to prevent them completely – was raised at the meeting.

“I think the atmosphere was constructive and the discussions were good, I cannot say that we resolved everything,” he said.

Chair of the meeting secretary general of the European External Action Service  (EEAS) Helga Schmid suggested in a statement that a stalemate still prevailed, saying only that “participants reaffirmed their continued commitment to preserving the JCPOA.”

The statement added that Iranian nuclear projects in Arak and Fordow had the participants’ “strong support”, and said another meeting “would be convened in the near future.”

Europeans are currently assessing possible responses to the situation in the Strait of Hormuz, with several countries amongst them France, Italy and Denmark having given initial support for a British plan for a European-led naval mission to ensure safe shipping through the passage.

Berlin has not yet ruled out potential German involvement in such a mission,  Germany’s new defence minister Annegret-Kramp Karrenbauer said last week, responding to calls for more German military engagement in the GUlf.

A senior German diplomat in Berlin said Foreign Minister Heiko Maas was in close contact with his British and French counterparts, Hunt and Jean-Yves Le Drian, to “contribute to the security” of the Gulf including on maritime security.

The head of the Chinese delegation, Fu Cong, said the Vienna talks on Sunday had taken place in a “very good” and “professional” atmosphere but also admitted there had been some “tense moments” between the participants.

Tensions between Tehran and Washington have escalated since last year when US President Donald Trump pulled out of the accord that was aimed at curbing Iran’s nuclear programme, and imposed punishing sanctions.

Iran said in May it would disregard certain limits the JCPOA set on its nuclear programme and threatened to take further measures if remaining parties to the deal, especially European nations, did not help it circumvent US sanctions.

Even before the latest tanker seizures, pressure had been mounting in the region with a string of incidents involving tankers and drones.

The US has said it brought down one and possibly two Iranian drones last week.

Iran shot down an unmanned US aircraft in June, after which Trump announced that he had called off retaliatory air strikes at the last minute because the resulting death toll would have been too high.

The US and Gulf powerhouse Saudi Arabia have accused Iran of being behind multiple mysterious attacks on tankers in the Gulf in June, which Iran denies.

Efforts by European powers, notably France’s President Emmanuel Macron, to salvage the nuclear deal have so far come to nothing.

Araghchi repeated after Sunday’s meeting that the remaining parties to the JCPOA wanted to meet “soon” at ministerial level.

He said preparation for such a meeting was ongoing and that JCPOA partners were also convening “expert meetings on different areas to find practical solution for Iran to enjoy its benefits of sanctions lifting”.

He admitted that INSTEX, a mechanism set up by the JCPOA’s European partners to facilitate trade with Iran in the face of US sanctions, was “not functioning yet but it is in its final stages”.