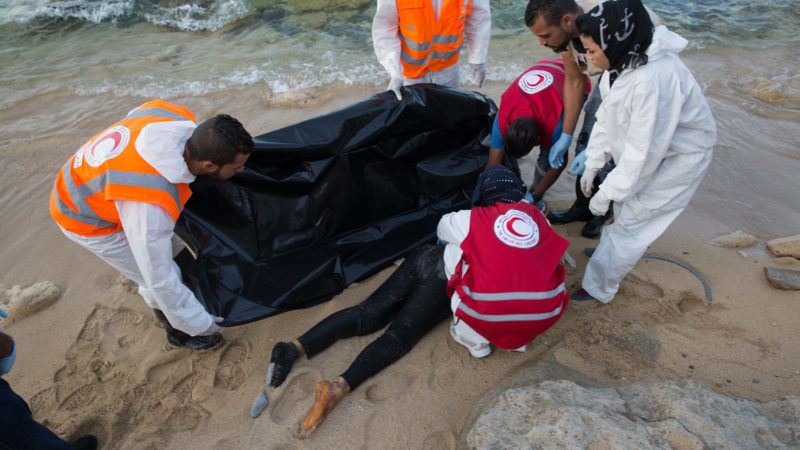 Libyan Red Crescent members attempt to place a deceased migrant into a body bag as they recover the bodies of drowned migrants who washed ashore, in Tripoli. Libya, November 2016. [STR/EPA]

Data from the International Maritime Organisation (IOM) shows the scale of the tragedy unfolding on Europe’s doorstep: the number of deaths in the Mediterranean this year rose from 1,340 on 22 May to 1,530 two days later. And these are just the ones that are counted.

“We need to think about new policies, it is not true that there is no alternative. We have to stop these deaths at sea,” Carlos Artundo, a spokesman for Médecins du Monde, told EFE. The NGO works in all the hotspots along the migration route, from the war zones in Syria to the shores of Greece and Italy.

He recalled that states bear the responsibility to rescue people at sea, not the NGOs that habitually save hundreds of people every day. This humanitarian work leaves them branded as criminals, accused by some governments of doing the dirty work of the people trafficking gangs.

“Many NGOs provide humanitarian surveillance of the sea and others were created specifically for that purpose, because states do not respect their legal obligations. We cannot remain unmoved by these deaths,” Artundo said.

Libya-Italy: The deadliest route in the world

The Spanish Committee for Refugee Aid (CEAR) also blames European governments for the “emergency situation in the Mediterranean”. It is especially critical of agreements like that signed between the EU and Turkey, which has pushed migrants away from the Greek route, “dangerous but less deadly than the Libya-Italy route, which is the deadliest in the world”.

“Every time a route is closed, another one opens, further and more dangerous, which brings even bigger profits to the gangs because the migrants pay higher prices,” said CEAR Director-General Estrella Galán.

The Libyan beaches, which extend from Tripoli to the Tunisian border, have become the operational centre for the people-trafficking gangs. One ticket costs €1,500, and the destination is often a watery grave.

Galán also criticised the EU’s agreements with countries like Libya, “where human rights are not respected and where the money goes to funding armed groups”.

The NGO Doctors Without Borders (MSF) also spoke out against the “harsh living conditions” of the migrants in Libya’s detention centres.

MSF, which has helped more than 4,000 migrants “detained arbitrarily” in three months in the centres in the Libyan capital, said that health professionals have even treated cases of acute malnutrition, as it not uncommon for migrants to go several days at a time without food.

“They live in often over-populated cells, they have no guaranteed access to toilets all day and suffer from severe injuries or traumas,” the NGO said.

Europe’s migration policies “are not working and are taking a heavy toll on human lives and the dignity and humanity of Europe”, Artundo added.

The Médecins du Monde spokesman called for more intelligent policymaking, but also greater humanity, with more open and flexible borders to allow people from poor communities in Africa to come and, for example, look for seasonal work on Spain’s fruit farms, then to return home by a safe route with the money they have earned.

“Unfortunately, this emergency situation has become chronic and the norm, and we do not see much political will,” the CEAR chief said. She added that European citizens have had enough of “political summits that end in the fortification of the borders and deals to keep out refugees”.