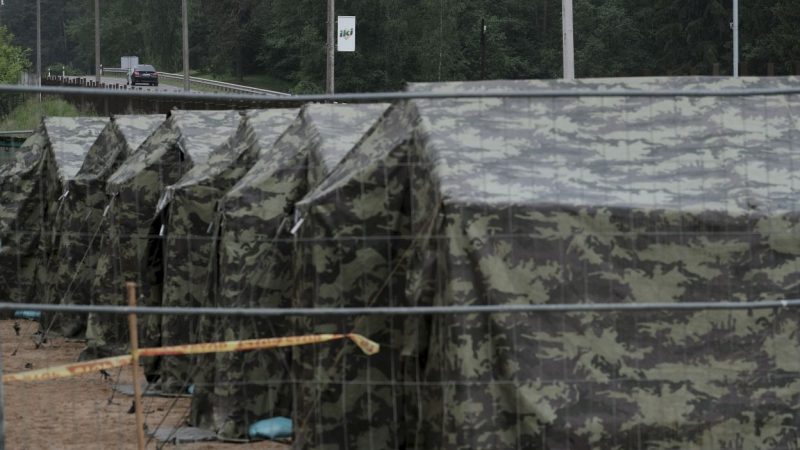 Black Mercedes vans are waiting at Minsk airport to bring Iraqi arrivals straight to some of the most popular three- and four-star hotels in the city with names such as Planeta and Sputnik. The new arrivals will spend several days there until the call comes to pack their things and get ready to leave.

Departing at night, they are taken to the Lithuanian border. The driver points the direction and the Iraqis head west. With last assurances that a car will meet them on the other end, they cross the border. But for most of them, their journey ends at a detention centre in Lithuania.

Pretending to be a migrant looking for ways to travel to Europe, Kareem Botane, a freelance Iraqi journalist working with LRT, contacted some smugglers in Kurdistan, where their contacts are readily available.

They told him that entering Europe via Belarus was legal, since Iraqi and Belarusian travel agencies issued tourist visas. They also said they had representatives in all of the largest cities of Iraqi Kurdistan, and were in contact with tourism agencies in Baghdad.

“We can offer Belarus, Germany, Lithuania, and other countries. From here to Belarus, and then it’s 20 minutes to Lithuania. Going from Baghdad to Lithuania will cost $10,000 per person,” said one of the smugglers, who gave his name as Hareem.

“We will organise a plane to Belarus, where you will stay for three or four days. Then we will transport you to Lithuania. A Belarusian tourism agency will come pick you up from the airport. You will be accommodated at a hotel, and I’ll come and get you at the border,” said the alleged smuggler, promising to sort out the visa and purchase plane tickets.

Travelling through Belarus and Lithuania is convenient when trying to get to Finland or other countries, said Hareem, adding that travellers can save money by staying in Lithuania.

The smuggler guaranteed that they would be taken by plane from Lithuania to Germany, France, or other countries without any problem. Hareem also reassured the caller that no one would detain him in Belarus since he would “have a visa.”

“First of all, no one can organise that on their own. Sometimes it will be a Kurd, sometimes an Arab, sometimes a Belarusian waiting for you at the airport. It depends on the company in Baghdad, and the company in Belarus that they are in contact with.”

“But that is not your problem,” Hareem said, adding that they had a network of Kurds, Arabs, Belarusians and Lithuanians helping migrants get to Europe.

Iraqi Airways have been offering direct flights from Baghdad to Minsk since 2017. In May, the first Fly Baghdad flight landed at Minsk airport.

Fly Baghdad promotional videos show the flight being greeted with water fountains at the airport and passengers receiving flowers and sweets.

While Belarus relishes the increasing number of tourists, Muthanna Amin, a member of the Iraqi parliament’s foreign affairs committee has been among those expressing concern over Iraqis leaving for Belarus to get to the EU.

“Recently, many young Iraqis travelled and continue to travel to Belarus. Some of them use this tourist route to illegally enter other countries in the EU from Belarus. Some people smugglers benefit from Belarus wanting to raise its economy through tourism,” said Amin.

Despite being used in smuggling schemes, tourism agencies cannot be blamed for organising trips, according to Amin.

“There will be attempts to illegally cross the border as long as tourist visas are issued. This, however, does not mean that everyone who goes to Belarus is a migrant,” said Amin, adding that smugglers help Kurds reach Turkey and the EU.

Tourists from Iraq are only accommodated in hotels approved by both the Belarusian and the Iraqi government, said Meer Sahebqran, owner of the Iraqi tourism agency Smile Holiday for Travel and Tourism. The list of hotels contains some of the most expensive names, such as Planeta, Sputnik, Minsk Hotel, as well as Crown Plaza Minsk and Marriott Hotel.

According to Iraqi travel agent Sahebqran, the governments of both countries also receive a list of Iraqis going to Belarus, which began issuing tourist visas only about three or four months ago.

“Confirmation should come from Belarus: name, hotel you’ll be accommodated in, duration of the stay. Organisations in Belarus confirm the information,” he said.

Iraqis leaving for Belarus are, however, asked to leave a deposit of $3,000. The sum is used to pay fines to Belarus in case a traveller does not return to Iraq, said Sahebqran.

“One person came and said he worked as a smuggler bringing people to Europe. He said there were 20 to 30 people and he wanted to bring them through Belarus,“ said Sahebqran.

“But we told them that these were the rules – pay $3,000 and if you do not come back, the money goes to the companies as a penalty. No problem, he said, just do it. But we don’t do such things.”

Most of the applications for entry visas to Belarus in recent months came from Kurds living in Iraq, according to another Iraqi travel agency.

“A visa costs $270 but we take a $4,000 deposit. We keep that money in case a person does not return,” said the employee at the travel agency, preferring to stay anonymous. “Some of them return, some do not. They choose their own path, they go to Europe.”

The money is then sent to larger travel agencies in Baghdad, who deal directly with Belarusian representatives. Among them is Fly Baghdad, according to the agency worker.

If an Iraqi person does not come back, the money is then transferred by the large Iraqi travel agencies to the Belarusian consulate in Baghdad, he said.

On July 13, however, the agency ran into a problem.

“We no longer work with Kurds from Kurdistan, since they’ve brought shame on me too many times. When they got there, they fled to EU countries,” said a representative from Amouaj Assel Travel Agency. “I’ve lost money because of Kurdish tourists and migrants.”

LRT spoke to some migrants detained at the Foreigners’ Registration Centre (URC) in Lithuania’s Pabradė. Most of them asked to remain anonymous.

They recalled a van waiting to pick them up from Minsk airport, with the driver, presumably a Belarusian, taking them to a hotel where they spent between one and four days. Then another van would come to take them to the Lithuanian border.

“An uncle had a friend who helped find this way. I didn’t know for sure what I needed to get on this route. We went from Erbil airport to Baghdad, and straight to Belarus from there. We were a group of 12 people,” said Selwan from Duhok in Iraqi Kurdistan. “Someone told me to give my passport to some officer, she would take care of the visa. So, it was a legal route, a legal visa.”

A “big black van” took his group to the hotel, the man said. He arrived in Lithuania in early February.

Another Iraqi added: “We sat outside the airport, someone came and asked us if we were Iraqis. We said yes, and then followed him. He was the owner of the van that picked us up.”

The driver was likely a Belarusian and took travellers to the hotel in a black Mercedes van, he said.

“The hotel was called Minsk. We spent two or three days there. On the third or fourth day, we went to the shower after returning to the hotel. It could have been 10 pm when someone knocked on our door and said to get ready, we’re leaving tonight. We got ready in an hour, he was waiting for us downstairs.”

They then travelled 5–6 hours to the Lithuanian border, he said.

The van then pulled over and the driver pointed towards the forest, saying “Europe will be there”, according to the Kurd.

“You will see a fence, you will easily get through it and then there will be a country,” the man recalled. “A car will be waiting for you and will take you further. But there was no car, it was very cold. We built a tent to get warm, but a [border guard] officer saw us.”

But some of the detainees came to Lithuania without the help of smugglers.

One of them, Fata, booked his flight from Baghdad to Minsk on 9 June. Having stayed in Belarus for five days, he crossed into Lithuania and asked for asylum.

Fata and three of his friends booked a flight to Minsk with an Iraqi tourism agency. They were accommodated at the Sputnik hotel and then paid 300 Belarusian rubles (around €100) to get to the Lithuanian border by taxi.

They used a satnav to find their way to Lithuania, said Fata, adding that a friend who had left for Lithuania earlier gave him the necessary information.

Meanwhile, some of the migrants came to Europe using the more difficult but cheaper route by land. It takes up to a week for the travellers to get to Europe by truck, and the trip costs between $4,000 and $5,000 per person.

When transported by truck, the migrants said they did not know which countries they passed, nor how long the trip took. According to them, their smugglers did not introduce themselves and kept their faces covered, speaking only when giving orders. Those giving orders would also change routinely, as would the trucks.

According to one of the detainees, a friend told him that the route via Belarus would be safer than crossing the Mediterranean or going through Bulgaria.

There were 30 of them, travelling in the dark, the detainee told LRT. They were told to go through the forest on foot until they reached the border. Then, they were found by Lithuanian border guards. The trip cost $5,000.

Not all tourists are migrants

Not every Iraqi goes to Belarus to get to the EU. Zana Ahmed Rahman, an engineer from Kurdistan, travelled to Belarus for a holiday.

“A friend of ours has been there twice, he said it was a nice country,” Rahman told LRT. Few countries issue tourist visas to Iraqis.

Rahman and his friends bought a holiday package from an Iraqi tourism agency Moonline and came to Belarus on 18 June. They had applied for an entry visa around a week before the flight, but were still held at the Minsk airport for around three hours.

An employee from a Belarusian tourism agency also warned them not to go near the border, according to Rahman.

One of Rahman’s friends knew the head of the tourism agency in Iraq and could reassure him they would come back. Therefore, they did not have to leave a deposit.

But five of the people from the same flight did not come back to Baghdad. Additionally, “two other guys told me that the Belarusian police did not let them go to the border,” Rahman said.

Complaints about conditions in Lithuania

In July, Lithuania began curbing the rights of irregular migrants and asylum seekers.

Those detained at the Foreigners’ Registration Centre in Pabradė complain of their restricted movement and cramped conditions. Many say openly that Lithuania is a transit country on their way to the rest of the EU.

“We are very sorry that we crossed the border, but we had no way to get into Lithuania legally,” said Selwan, an Iraqi Kurd. “We needed to take this route, risk it, if we wanted to be safe.”

Migrants who attempt to escape from Pabradė are then put in a protected compound at the centre. Border guards take away their phones and only allow them to spend one hour per day outside, according to the migrants.

“Everyone detained in this building is suffering psychologically,” said Rian from Iraq. According to him, there have already been cases of suicide attempts at the centre.

“I already ran away from Iraq, [since it is] a prison,” said Eliah, who introduced himself as a Yazidi, an ethnic group that survived a genocide by ISIS. “It is the same here.”