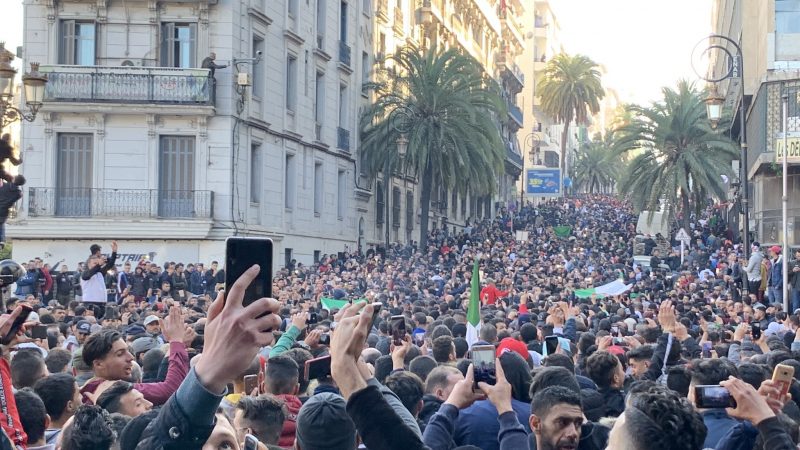 Algeria’s prime minister on Monday (25 February) insisted voters would determine if ailing President Abdelaziz Bouteflika gets a fifth term at the ballot box, after major protests against his candidacy.

Tens of thousands of people on Friday took to the streets, including in the capital Algiers where demonstrations are forbidden, to vent their ire at Bouteflika’s bid to extend his 20 years in power at elections in April.

Thousands have taken to the streets across Algeria to protest a re-election bid by longtime ruler Abdelaziz Bouteflika pic.twitter.com/6zeCbtevkS

Presidential polls “will take place in less than two months, and everyone will make their choice freely”, Prime Minister Ahmed Ouyahia said in televised comments that were the first official reaction to the protests.

“Everyone has the right to support their candidate and be against any other candidate, the ballot box will decide in a peaceful and civilised way.”

Thousands across Algeria protest against President Bouteflika's plans to run for a fifth term. pic.twitter.com/xRq2xQ4zKk

Bouteflika, who uses a wheelchair and has rarely been seen in public since suffering a stroke in 2013, announced on February 10 that he will run for another term in office.

The 81-year-old leader flew to Switzerland on Sunday for what the presidency called “routine medical checks” ahead of the 18 April vote.

Algerians on a third straight day of demonstrations against the ailing president Abdelaziz Bouteflika and his bid to seek a fifth term in office. Despite his ill health Mr Bouteflika, 81, announced earlier this month he would be a candidate in presidential elections in April. pic.twitter.com/5OEgnAiZyh

“Thank god the rallies were peaceful, but I urge vigilance” as “calls to demonstrate were from an unknown source”, Ouyahia said.

The premier insisted Bouteflika has pledged to hold a national “conference, unprecedented in the history of Algeria” if he is reelected, where “everything” can be discussed.

“Algeria has been through enough suffering and experienced enough reforms to have the opportunity to choose in peace and quiet,” he said.

The scale of the demonstrations on Friday took many in the North African state by surprise.

A follow-up call for protests by a small opposition group drew hundreds in central Algiers Sunday, but they were met by a heavy police deployment and tear gas.

On Monday around a hundred lawyers protested at court over the fifth term, waving placards that they were “with the people”.

Students have called on social media for fresh demonstrations Tuesday, while teachers and university lecturers have urged their colleagues to join in.

Bouteflika, who has governed Algeria since 1999, was instrumental in fostering peace after a decade-long civil war in the 1990s.

“When it comes to the upcoming elections as for any other partner, we wish this election would allow the citizens to express themselves freely, calmly and in compliance with the democratic framework and the rule of law,” she said.