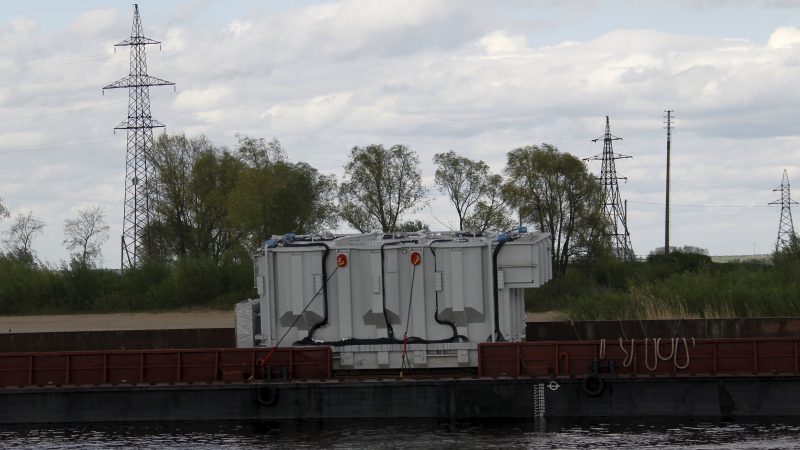 An autotransformer on a barge in Nemuna river, Rusne, Lithuania, 13 May 2021. The most powerful autotransformer in the Baltic States was loaded onto a barge and will be deliver for the expansion of the Lithuanian-Polish electricity system connection LitPol Link. [Valda Kalnina/EPA/EFE]

Three EU Baltic states on Thursday (13 May) took a big step toward accessing the bloc’s power grid, a move intended to end energy dependence on Russia dating back to the Soviet era.

Speaking in the port city Klaipeda, Lithuania’s energy minister Dainius Kreivys hailed the arrival of a massive and key piece of grid infrastructure as a “crucial step” towards energy security.

The 164-tonne autotransformer will allow power to flow from fellow EU member Poland to the three Baltic states via the LitPol link.

Estonia, Latvia and Lithuania were occupied by the Soviet Union until 1991 and are still hooked into Russia’s power grid, making them vulnerable to energy cuts by Moscow.

Tensions have flared between the three small states and Russia over its 2014 annexation of Crimea from Ukraine and support for Belarusian strongman Aleksander Lukashenko among other matters.

Thanks to European Union funding, the Baltic states plan to fully synchronise their grids with the rest of Europe via Poland by 2025.

“Synchronisation will be the last step in Lithuania’s integration with democratic Western world,” Kreivys said.

The project is part of the EU’s landmark energy union designed to secure supplies for the 27-member bloc.