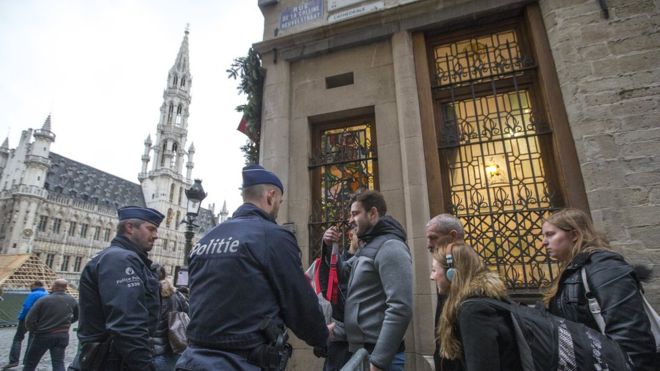 Belgium maintained the highest security alert for Brussels on Monday with the metro system and schools to re-open only on Wednesday after authorities said there was an imminent threat of a Paris-style attack in the Belgian capital.

The alert level for Brussels would remain at the highest level four while in the rest of the country it would stay at three.

“I can confirm that the threat of an attack is serious and imminent,” Prime Minister Charles Michel said after a meeting with key members of his cabinet.

A man arrested in a raid on Sunday has been charged in connection with the Paris attacks, the country’s federal prosecutor said, as the capital remained locked down on Monday., without giving the man’s name or any other details.

Prosecutors said that the people arrested on Sunday didn’t include Salah Abdeslam, a suspect in the Paris attacks who has been at the center of an international manhunt for over a week.

A further 15 people arrested on Sunday were released after questioning, the prosecutor’s office said. Three are still detained.

Brussels has been on its guard since it emerged that at least three jihadists behind the Paris assaults lived in the city. Abdeslam, who’s now the focus of an international manhunt, comes from the Molenbeek district of the capital. Belgian counter-terrorism officers have carried out 29 raids in Brussels, Charleroi and Liege within the last day, federal prosecutors said.