"There are police officers everywhere, on all decks, as well as armoured vehicles. The atmosphere is a very special one because we don't know what will happen. We hear contradicting things. Apparently, tomorrow, there will be massive protests in Bayonne, and the 'casseurs' will also be there," explained Audrey, a shopkeeper central Bayonne.

Since Thursday (22 August), Biarritz and other cities on the French Basque coast have looked like a scene out of a post-apocalyptic movie. In the security perimeters around the Hôtel du Palais, where the seven heads of state will meet for the G7 summit, no living soul is to be seen.

Two zones, one red and one blue, have been placed under security and can only be accessed with authorisation and a special badge.

Local inhabitants and merchants are not pleased with this state of affairs, while EURACTIV’s own correspondent has faced difficulties accessing the city.

“I left Biarritz for a few days because it was going to be unbearable. The whole city centre is bunkered. The police are everywhere, and there will be demonstrations, clashes, break-ins, maybe injuries, and I didn’t want to see that,” explained Stéphanie, who lives in the red zone.

“Even if we remain there, we have been thrown out. It is impossible to live in one’s city. Either you are partitioned or searched, and all for not even three days of the summit,” Stéphanie continued.

The cheeky Donald Trump, the eccentric Boris Johnson and his companions are meeting from Saturday evening for an opening dinner to Monday afternoon for a final press conference. And that for an estimated total cost of over €36 million.

During his pre-visit in May, French President Emmanuel Macron already announced that security would be “extremely heavy” and “unprecedented”.

The president seems to have kept his promise, given that Biarritz airport and five train stations in the region have been temporarily closed. Also, in addition to the 13,000 gendarmes and police officers deployed, de-mining robots, drones, divers and canine brigades are all on the ground.

On the ocean side, the beach and all nautical activities will be monitored and prohibited along the 17 km coastline.

Ground-to-air missiles have even been installed in Tarnos, in the department of Landes, to protect against air threats.

Marco Perolini, a researcher for Amnesty International, who is present on the ground, fears excessive police and judicial measures will be taken.

To ensure troublemakers are rapidly brought to justice, 17 prosecutors have been called upon and 300 police custody places freed.

Amnesty reports that a migrant detention centre in Hendaye has been emptied to use a hundred rooms as police custody rooms.

In Bayonne, prefabricated cells have been set up in front of the courthouse. NGOs now fear there will be “massive and arbitrary arrests, as well as accelerated legal proceedings.”

French police fear the “black blocks” and so-called “casseurs”, who have come from all over the world to protest against the system and attack the symbols of capitalism and liberalism, with banks as their first target.

“In the last nine months, during the ‘yellow vest’ movement, we have seen that legal measures were used to prosecute peaceful protestors who have not committed acts of violence. We fear the same will happen during the G7 summit,” said Marco Perolini, highlighting that the entire ‘ammunition’ used by the state only creates further tensions.

On the eve of the summit’s launch, both local residents and NGOs are describing the atmosphere in and around Biarritz as being a “very special one”. The city of Bayonne even resembles a military camp.

“There are police officers everywhere, on all decks, as well as armoured vehicles. The atmosphere is a very special one because we don’t know what will happen. We hear contradicting things. Apparently, tomorrow, there will be massive protests in Bayonne, and the ‘casseurs’ will also be there,” explained Audrey, a shopkeeper central Bayonne.

“So as a precautionary measure, we closed the shop until Tuesday morning and barricaded the window with wooden plates. In any case, the entire street will be closed. All the banks have already been barricaded,” she added. 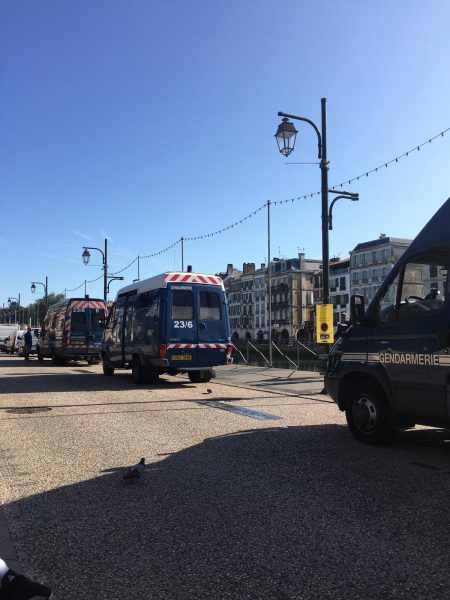 “Bayonne City Hall told us not to close because we are the image of Bayonne and the whole world will see us during the G7. However, they have barricaded Chronoplus [editor’s note: the transport network] since Thursday,” Audrey noted with regret.

“There are CRS trucks everywhere, and it’s a little strange. Because in Hendaye, for example, where the anti-G7 summit is taking place [30 km from Biarritz], tourists are still there, but the city is armoured with police forces,” said Marco Perolini.

“There is like an atmosphere of suspense,” he added.