Biden assures he has the allies’ backing ahead of Putin meeting 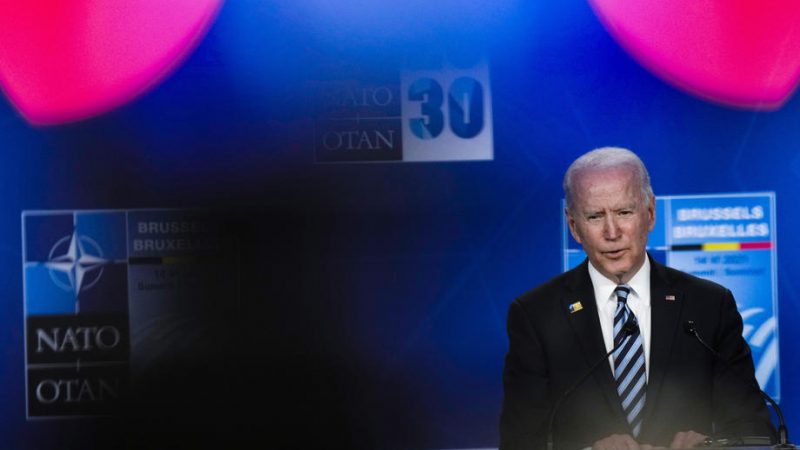 epa09271735 US President Joe Biden speaks during a media conference at a NATO summit in Brussels, Belgium, 14 June 2021. US President Joe Biden is taking part in his first NATO summit, where the 30-nation alliance hopes to reaffirm its unity and discuss increasingly tense relations with China and Russia, as the organization pulls its troops out after 18 years in Afghanistan. EPA-EFE/Francisco Seco / POOL [EPA-EFE/Francisco Seco]

On the eve of his bilateral meeting with Russia’s President Vladimir Putin, US President Joe Biden told NATO allies he would tell Moscow he was not looking for conflict with Russia, but that NATO would respond if Russia continued its harmful activities.

Biden, who is to meet Putin on Wednesday (16 June) in Geneva, said he would make clear to Putin that there were areas where cooperation was possible if Moscow so chooses, but that the United States was ready to respond in kind if it faces aggressive Russian action.

Speaking on the sidelines of NATO during a late-night news conference on Monday, Biden fended off criticism that he should not meet Putin in the wake of Navalny’s poisoning and Russia’s alleged cover action in a Czech military arms depot blast.

“Every world leader here as a member of NATO that spoke today, and most of them mentioned it, thanked me for meeting with Putin now – every single one that I spoke to,” Biden told reporters, adding this would have been “probably about 10 or 12” counterparts.

In Washington, some Republicans had criticised him for agreeing to meet with Putin with no preconditions, as he could see it as a ‘reward’.

“[They were] saying they were happy that I did that, that I was going to do that, and they thought it was thoroughly appropriate that I do, and I had discussions with them in the open about what they thought was important from their perspective,” Biden added.

Earlier in the day, NATO leaders had called out Russia as a “threat” to the alliance and in another indirect reference agreed on a new cyber defence policy.

In their final communiqué, they deplored what they consider  “aggressive actions” and military activities near NATO borders, as well as repeated violations of their airspace by Russian fighter jets.

They said that Russia had ramped up “hybrid” actions against member countries by attempts to interfere in elections, by political and economic intimidation, by disinformation campaigns and “malicious cyber activities.”

“Russia continues to breach the values, principles, trust, and commitments outlined in agreed documents that underpin the NATO-Russia relationship,” they said.

“Until Russia demonstrates compliance with international law and its international obligations and responsibilities, there can be no return to ’business as usual,’” the final communiqué read.

On the sidelines of the summit, Biden had also met with leaders of Estonia, Latvia and Lithuania.

“I’m going to make clear to President Putin that there are areas where we can cooperate, if he chooses,” Biden told reporters as he ended his day at NATO headquarters.

“If he chooses not to cooperate and acts in a way that he has in the past relative to cybersecurity and other activities, then we will respond, we will respond in kind.”

Asked whether he still thinks Putin is a killer, as he has previously said, the Biden laughed.

“I have met with him. He’s bright. He’s tough – and I have found that he is a, as they used to say when I used to play ball, a worthy adversary,” he added.

“I believe he is, in the past, essentially acknowledged that he was, there were certain things that he would do or he did do,” he said. “But look, when I was asked that question on air, I answered it honestly. I don’t think it matters a lot in terms of this next meeting we’re about to have.”

Biden declined to say what concessions he would ask Putin for, but he did issue a warning about jailed opposition figure Alexei Navalny.

If Navalny died in prison, Biden said, it would hurt Russia’s relationship with the US and the rest of the world.

“Navalny’s death would be another indication that Russia has little or no intention of abiding by basic fundamental human rights,” Biden said. “It would be a tragedy.”

The US president made the comments in reply to an interview by Putin with NBC earlier on Monday, in which the Russian leader refused to guarantee that Navalny would survive his imprisonment.

“As far as the health, all individuals who are in prison, that is something that the administration of the specific prison or penitentiary establishment is responsible for. And there are medical facilities in penitentiaries that are perhaps not in the best condition. And they are the ones whose responsibility it is”, Putin told NBC.