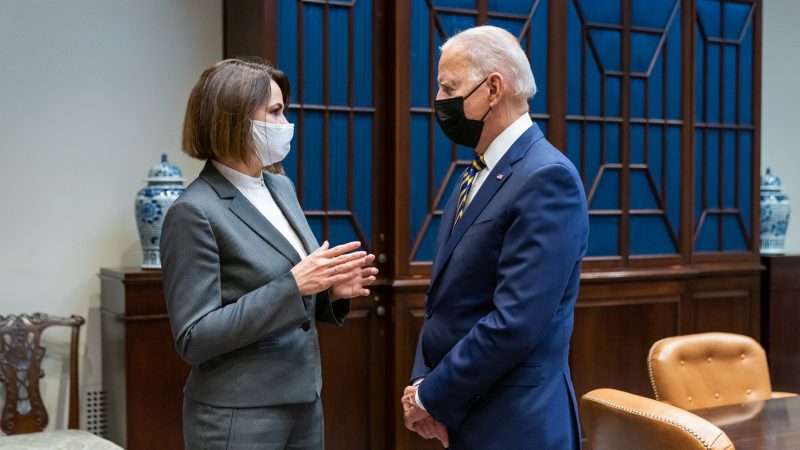 US President Joe Biden met Wednesday (28 July) with Belarus opposition leader Svetlana Tsikhanouskaya at the White House, in a strong show of support for pro-democracy protesters who say she won last year’s election.

“I was honored to meet with @Tsihanouskaya at the White House this morning,” Biden said in a tweet, referring to the exiled opposition figure leading the fight against strongman Alexander Lukashenko.

I was honored to meet with @Tsihanouskaya at the White House this morning. The United States stands with the people of Belarus in their quest for democracy and universal human rights. pic.twitter.com/SdR6w4IBNZ

“The United States stands with the people of Belarus in their quest for democracy and universal human rights,” he added.

Tsikhanouskaya, on a tour of the United States aimed at raising international pressure to bring down Lukashenko, called the meeting “an inspiration for our people.”

It is “a message to the whole world that the greatest country in the world is with us,” she told AFP in an interview shortly after the meeting.

“This meeting is like the success of all Belarusians who are fighting,” she said.

Tsikhanouskaya says she easily won the August election in which Lukashenko, a close partner of Russian President Vladimir Putin, was declared the winner of a sixth term.

Belarusian authorities have used force to put down demonstrations against Lukashenko’s rule and have been trying to snuff out remaining dissent, recently jailing university students and raiding the homes of journalists.

In May, Belarus even forced down a civilian airplane from Greece to Lithuania, citing a security threat, and arrested an opposition journalist and his girlfriend who were passengers.

Talks on ‘points of pressure’

An English teacher turned stay-at-home mother, Tsikhanouskaya was thrust into the international spotlight when her husband was detained and she took his place as the presidential candidate. She fled to Lithuania for her safety.

She told AFP she was not asking to be recognized by Biden as the president of Belarus, but that she was looking to increase pressure on Lukashenko.

“We talked about multiple points of pressure on the regime to force him to stop violence, release political prisoners and start dialogue” with the opposition, she said.

“Belarus can be an example of non-violent transitional power.”

She said she also spoke to Biden about ensuring the “independence and sovereignty” of Belarus — a veiled reference to repeated concerns that Putin could seek to incorporate the country into Russia.

“When autocracies become a threat to the other countries, it’s important to be with those who are fighting against them,” she said.

Tsikhanouskaya earlier on Twitter hailed the meeting as “a powerful sign of solidarity with millions of fearless Belarusians who are peacefully fighting for their freedom.”

“The world stands with us. Belarus will be a success story.”

She returned to Washington from New York for the previously unannounced talks with Biden, which took place just as US and Russian delegations were wrapping up a dialogue in Geneva to follow up on his June summit with Putin.

After her meeting with Blinken, Tsikhanouskaya said she handed the United States a wish-list of further sanctions to target the regime.

She said she hoped for sanctions against state-controlled companies in the areas of potash, oil, wood and steel, seeking to force both Belarusian and international companies to choose whether to keep working with the regime.

The United States and European Union have already imposed a raft of sanctions on Belarusian companies and officials, although Tsikhanouskaya has urged the Europeans to close loopholes that allow existing contracts to continue.