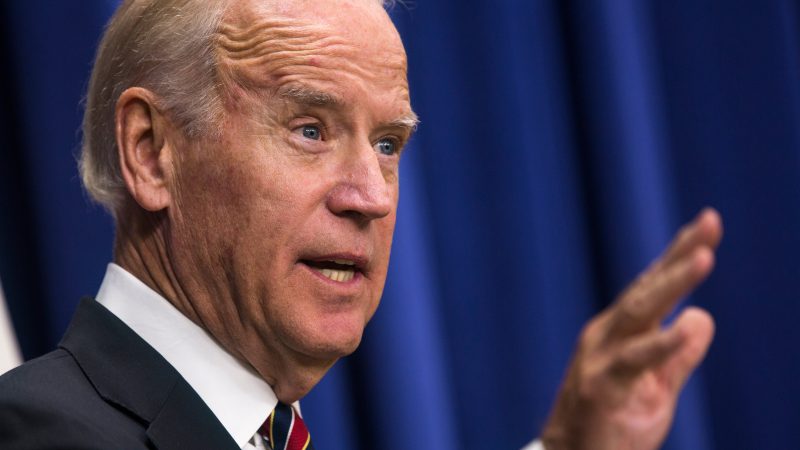 File photo. US Vice President Joe Biden speaks during the 'Summit on Climate and the Road through Paris: Business & Science Coming Together' in the Eisenhower Executive Office Building in Washington, DC, USA, 19 October 2015. [Jim Lo Scalzo/EPA/EFE]

Once US President-elect Joe Biden takes office – and as more countries struggle with climate impacts – policies that tackle global warming are expected to begin emerging in a wider range of world bodies in 2021, climate diplomats said on Thursday (14 January).

That could include the World Trade Organization preparing to handle disputes over planned “carbon border taxes” – tariffs on imports from countries that do not tax emissions at source – and the UN Security Council addressing climate-linked threats.

For security officials, “climate change is no longer the threat multiplier – it is the threat”, John Podesta, former US President Bill Clinton’s chief of staff and an adviser to former US President Barack Obama, told an online event. Veteran Democratic politician Biden is due to take office on 20 January and has promised a comprehensive green agenda to combat climate change, both in the United States and globally.

Connie Hedegaard, former European Commissioner for Climate Action, said government groups like the G7 and G20 were likely to consider more ambitious climate policies once climate-skeptic US President Donald Trump was not there to block efforts.

That could potentially lead to work toward global agreements on phasing out high-carbon energy, as well as a regulatory framework for sustainable finance, she predicted.

In a growing number of international fora, “the climate voice can be present whatever other bigger topic is being discussed there,” she said. “That’s crucially important.”

Podesta said Biden’s appointment of John Kerry, Obama’s former secretary of state, as his special envoy for climate suggested the new US president intended to push international climate action as strongly as climate policy at home.

Biden would likely start action to restore the United States to the 2015 Paris Agreement on climate change – which Trump exited last year – on his first day in office, Podesta said.

He has also promised to hold an international summit within the first 100 days of his term aimed at driving greater global ambition to tackle climate change.

But crafting a new US national contribution to the Paris Agreement might take until late spring or early summer, Podesta said, to ensure that what is promised internationally fits with domestic climate plans.

Biden has said he wants to put the United States on a path to getting all of its electricity from renewable sources by 2035, and having net-zero emissions across the economy by 2050, in line with new pledges by nations from Japan to South Korea.

Tina Stege, climate envoy for the Marshall Islands, a low-lying Pacific atoll nation, said having an ambitious US contribution to the Paris Agreement quickly was key to encouraging more much-needed ambition from other nations.

“We’re playing catch-up. We’re in a deep hole,” said Stege, whose country leads a “High Ambition Coalition” of nations pushing for stronger global efforts to reduce emissions. “The US is really central to driving ambition and action.”

Countries like hers – which rises to just 2 metres above sea level – also need swift financial help to adapt to sea level rise driven by warming, she said.

“Adaptation needs are not being met, even as the needs to adapt to climate change are becoming increasingly urgent,” she added.

During his campaign, Biden said he would aim to make good on a financial pledge to the international Green Climate Fund, $2 billion of which was not delivered by the Trump administration.

That move may now be easier after the Democrats took control of the US Senate following recent run-off elections in the state of Georgia, giving them more control over spending.

“The new administration has the potential to make finance commitments that give nations like mine a fighting chance,” Stege said.