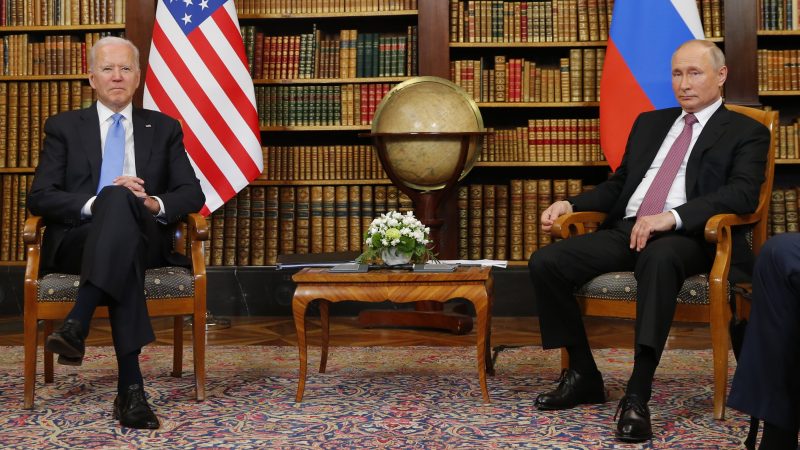 The two leaders emerged cautiously positive after more than three hours of talks, including two hours alone with just the Russian foreign minister and US secretary of state.

Putin, 68, called Biden, 78, a constructive, experienced partner, and said they spoke “the same language.” But he added that there had been no friendship, rather a pragmatic dialogue about their two countries’ interests.

“The conversation was absolutely constructive,” Putin told reporters, adding they had agreed for their ambassadors to resume their posts in a gesture of diplomatic healing.

Biden called the session, conducted at an elegant villa on the shores of Lake Geneva, “good”. 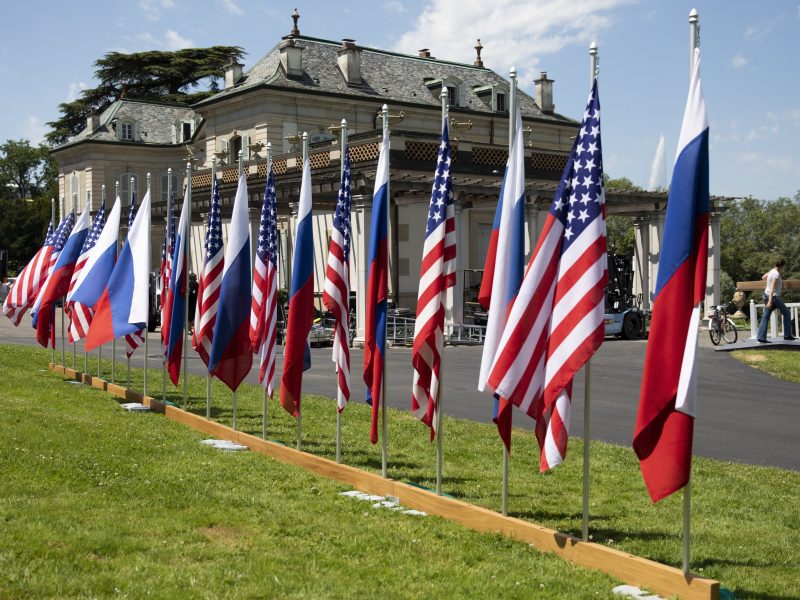 President Joe Biden will draw “red lines” for President Vladimir Putin at a tense Geneva summit on Wednesday (16 June), where ghosts of the Cold War will hover over modern-day US concerns that Russia has become a rogue, authoritarian state.

A senior US official told reporters that Biden, Putin, their foreign ministers and interpreters met first for 93 minutes. After a break, the two sides met for 87 minutes in a larger group including their ambassadors.

Putin said it was “hard to say” if relations would improve, but that there was a “glimpse of hope.”

“This is not about trust, this is about self-interest and verification of self-interest,” Biden said, but he also cited a “genuine prospect” of improving relations.

The US president, who was ending a grueling diplomatic tour of Europe, said he and Putin explored working together on areas where the former superpower rivals have overlapping interests, including the Arctic, Iran and Syria.

Both Biden and Putin said they shared a responsibility, however, for nuclear stability, and would hold talks on possible changes to their recently extended New START arms limitation treaty.

In February, Russia and the United States extended New START for five years. The treaty caps the number of strategic nuclear warheads they can deploy and limits the land- and submarine-based missiles and bombers to deliver them.

However, Biden emphatically warned the Kremlin against any cyberattacks on what he said were 16 clearly defined areas of US critical infrastructure.

Those areas, which he did not make public, “should be off limits”. Violations, Biden warned, would lead to a US response in kind — “cyber”.

Washington accuses Moscow of, at a minimum, harbouring cyber ransomware gangs and also conducting the SolarWinds cyberattack on US entities.

“I looked at him and said: ‘How would you feel if ransomware took on the pipelines from your oil fields?’ He said: ‘It would matter,'” Biden told reporters at an unusual solo news conference, itself an illustration of the tensions between the two nations.

The query referred to a cyberattack that closed the Colonial Pipeline Co system for several days in May, preventing millions of barrels of gasoline, diesel and jet fuel from flowing to the East Coast from the Gulf Coast. 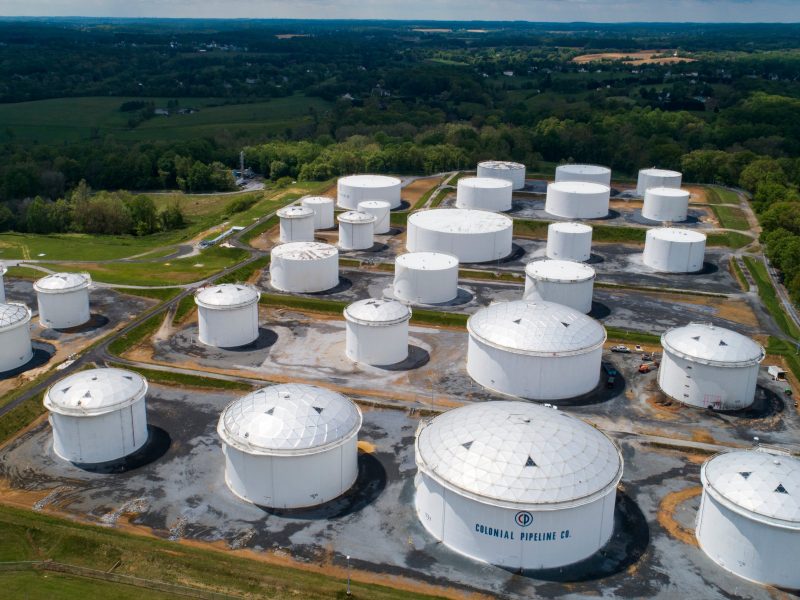 The White House was working closely with top US fuel pipeline operator Colonial Pipeline on Sunday (9 May) to help it recover from a ransomware attack that forced the company to shut a critical fuel network supplying populous eastern states.

Biden also vowed to take action against any Russian cyberattacks: “I pointed out to him that we have significant cyber capability. And he knows it.”

“We need some basic rules of the road that we can all abide by,” Biden said he had told Putin.

US intelligence has also claimed that Russian agencies conducted a dirty tricks campaign to try and disrupt the last two presidential elections.

But to suggestions that the world could witness a repeat of the 20th century’s Cold War — when Washington and Moscow spent decades in a nuclear standoff before the Soviet Union finally collapsed — Biden said Putin knows his limits.

“I think that the last thing he wants now is a Cold War,” Biden said.

Diplomatic relations between Moscow and Washington had all but broken down since Biden took office in January.

After Biden likened Putin to a “killer”, Russia in March took the rare step of recalling its ambassador Anatoly Antonov. The US envoy, John Sullivan, likewise returned to Washington.

Putin said on Wednesday that he had been satisfied by Biden’s explanation of the remark.

The summit got off to a good start, with the two leaders shaking hands for the cameras.

But Putin later issued withering rejections of criticism over his human rights record and allegations of harbouring cyber criminals.

He claimed instead that “the largest number of cyberattacks in the world are carried out from the US”.

Putin also sought to deflect criticism of his treatment of opponents — many high profile critics have been killed in Russia during his rule and the media is almost entirely muzzled — saying that the United States had bigger problems.

He suggested Washington was in no position to lecture Moscow on rights, batting away question about his crackdown on political rivals by saying he was trying to avoid the “disorder” of a popular movement, such as Black Lives Matter.

“What we saw was disorder, disruption, violations of the law, etc. We feel sympathy for the United States of America, but we don’t want that to happen on our territory and we’ll do our utmost in order to not allow it to happen,” he said.

He also seemed to question the legitimacy of arresting the rioters who attacked the US Capitol on 6 January, seeking to stop Biden’s certification as president after he beat his predecessor, Donald Trump, in the November election by over 7 million votes.

Biden said any comparison between what happened on 6 January and the Black Lives Matter movement was “ridiculous.”

Biden said he raised human rights issues because it was in the “DNA” of his country to do so, and also because of the fate of US citizens jailed in Russia.

Putin said he believed some compromises could be found, although he gave no indication of any prisoner exchange deal.

The offer of a more understanding US-Russian relationship — if not necessarily a more friendly one — went a long way toward what Putin is reportedly seeking: increased respect on the world stage.

Biden’s reference to the United States and Russia as “two great powers” was sure to please the Kremlin leader, who has dominated his country for two decades, infuriating the West with invasions of Ukraine and Georgia, and often brutal crushing of political dissent.

Republican opponents back in Washington called Biden naïve for his contention that reaching out to Putin will encourage him to bring Russia out of the diplomatic cold.

“It is clear to me that Putin could care less about how he’s viewed by others,” Republican Senator Lindsey Graham tweeted, saying Biden had “miscalculated”.

The choice of Geneva recalled the Cold War summit between US president Ronald Reagan and Soviet leader Mikhail Gorbachev in the Swiss city in 1985.

The summit villa, encircled with barbed wire, was under intense security. Grey patrol boats cruised along the lakefront and heavily-armed, camouflaged troops stood guard at a nearby yacht marina.

But in contrast with 1985, tensions are less about strategic nuclear weapons and competing ideologies than what the Biden administration sees as an increasingly rogue regime.

Putin came to the summit arguing that Moscow is simply challenging US hegemony — part of a bid to promote a so-called “multi-polar” world that has seen Russia draw close with the US’s arguably even more powerful adversary China.

In a pre-summit interview with NBC News, he scoffed at allegations that he had anything to do with cyberattacks or the near-fatal poisoning of one of his last remaining domestic opponents, Alexei Navalny.

For Biden, the summit ended an intensive first foreign trip as president. He arrived in Geneva after summits with NATO and the European Union in Brussels, and a G7 summit in Britain.

Unlike in 2018, when Biden’s predecessor Donald Trump met Putin in Helsinki, there was no joint press conference at the end of the summit.

The US side clearly wanted to avoid the optics of having Biden sharing that kind of platform with the Russian president.