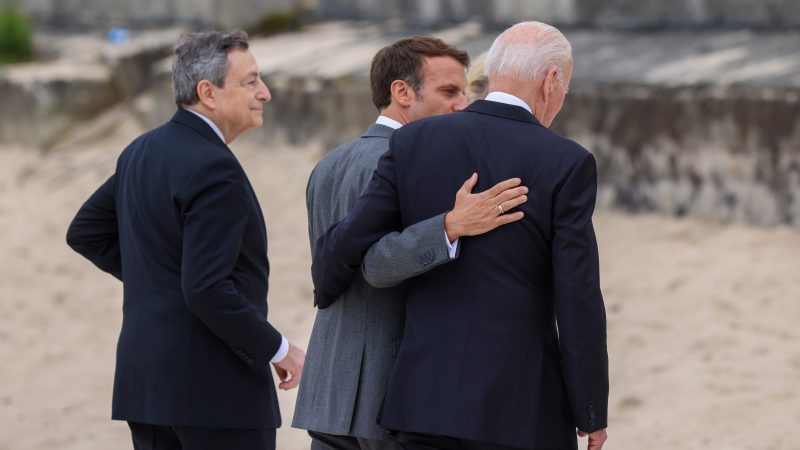 As world leaders flock to Rome for the G20 summit, President Joe Biden kicks off a trip aimed at reasserting US international credentials, starting at a meeting Friday (29 October) with Catholic ally Pope Francis.

The president left Washington with a spring in his step after unveiling a “historic” framework for a vast social spending plan — although it remains to be seen if it can win the support of lawmakers.

The Build Back Better Framework is going to rebuild the middle class. pic.twitter.com/UYM50uaOMI

After weeks of internal party feuding, and with his personal ratings slumping, Biden wants to use the twin summits in Europe this week — the G20 and UN climate talks in Glasgow — to prove his political clout.

He sees himself as the spokesman for democracy in the face of authoritarian regimes, notably China.

But he opens the trip on a more intimate note, having landed early Friday in Rome, he will head first to the Vatican, for what is expected to be a largely good-humoured sit-down with Pope Francis.

Only the second ever Catholic president, Biden is open about his faith and almost never misses Sunday mass.

He has met the head of the world’s 1.3 billion Catholics three times already, but this will be their first since the 78-year old was elected president.

Biden has spoken of the strength he drew from his faith faced with a series of bereavements — after his first wife and their daughter were killed in a car accident, and his son Beau later died of cancer.

He and the pope share a range of concerns, from poverty to climate change and the coronavirus pandemic.

But there is potential for a falling out should either leader raise the red-button issue of abortion.

Biden supports the right to choose, while Francis, 84, has slammed terminating pregnancies as “murder”.

The pontiff has nonetheless distanced himself from a push by conservative US bishops to deny communion to politicians supportive of abortion rights — which would include Biden.

After Francis, Biden crosses the Tiber into the heart of the Eternal City to meet Prime Minister Mario Draghi — the man, dubbed “Super Mario”, tasked with reforming Italy after the devastation of Covid-19.

The G20 host, a former head of the European Central Bank famous for his efforts to save the euro from collapse, is being closely watched in Washington for his plans to set debt-laden and politically fractious Italy back on track.

But while Draghi is the new star of European politics, Biden seems to have lost some of his shine.

The president, who appears confident his $1.75 trillion social spending plan is in the bag, hopes to use the G20 and the COP26 climate summit to show the world “America is back”.

He will doubtless boast about the package including “the most significant investment to deal with the climate crisis ever” — 550 billion dollars to cut greenhouse gas emissions.

The veteran foreign policy expert is determined to distance himself from the unilateralism of ex-president Donald Trump, and will be seeking to soothe ruffled feathers.

He will also have some fence-mending to do after a chaotic withdrawal from Afghanistan, which irritated US allies, and a major spat over nuclear-powered submarines.

He may need to reserve his biggest charm offensive for French President Emmanuel Macron, who is he due to meet on Friday for the first time since the subs row.

Paris was furious after Australia ditched a major deal to buy French submarines last month, saying it was negotiating a new defence pact with the US and Britain.

Briefing reporters traveling with the president on Thursday, national security adviser Jake Sullivan said Biden’s meeting with Macron on Friday would “cover the waterfront” of issues as the two mend fences after a rift over a US security pact with Britain and Australia.

The meeting will include discussion of counterterrorism in the Middle East, competition with China, the economy, trade and technology issues.

The main topic on Saturday at a meeting among Biden, Macron and leaders of Germany and Britain will be the status of the Iranian nuclear program.

Sullivan said Biden would be working toward a “shared strategy and solidarity and unity in our approach” on Iran but did not specify if the leaders would discuss a resumption of talks with Tehran.

Biden is also hoping to find common ground with world leaders on easing supply chain bottlenecks at a forum he is hosting on Sunday, Sullivan told reporters.

The United States hopes to reach agreements at the meetings on new international commitments on vaccines, preparing for future pandemics and climate change.