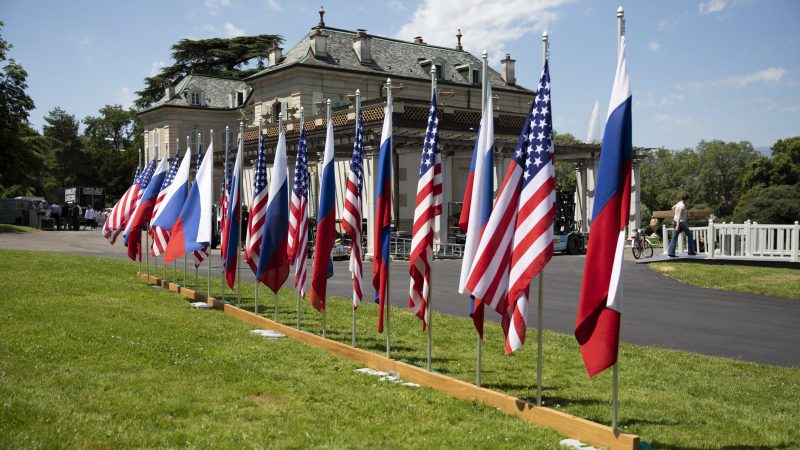 Flags of the US and Russia photographed in the garden in front of the villa La Grange, one day prior to the US - Russia summit in Geneva, Switzerland, 15 June 2021. [EPA-EFE/PETER KLAUNZER]

President Joe Biden will draw “red lines” for President Vladimir Putin at a tense Geneva summit on Wednesday (16 June), where ghosts of the Cold War will hover over modern-day US concerns that Russia has become a rogue, authoritarian state.

The setting — a sumptuous villa overlooking Lake Geneva — may be picturesque, but a gruelling diplomatic face-off awaits.

Up to five hours of talks are planned, starting at around 1:00 pm (1100 GMT), with no break for meals. Putin is due to arrive first, then Biden, with Swiss President Guy Parmelin acting as host.

Asked if the two leaders might share food together, a staple gesture of goodwill in summit diplomacy, a senior US official said no.

“There will be no breaking of bread,” he said, speaking on condition of anonymity.

The choice of Geneva, following long US-Russian negotiations, recalls the Cold War summit between US president Ronald Reagan and Soviet leader Mikhail Gorbachev in the Swiss city in 1985.

This time, tensions are less about strategic nuclear weapons and competing ideologies than what the Biden administration sees as an increasingly hostile, rule-breaking regime.

From cyber-attacks on American entities and meddling in the last two US presidential elections, to human rights violations and aggression against Ukraine and other European countries, Washington’s list of allegations against the Kremlin runs long.

Putin, however, comes to the summit arguing that Moscow is simply challenging US hegemony. It’s part of a bid to promote a so-called “multi-polar” world that has seen Russia and arguably even more powerful US adversary China draw close.

Putin was due to fly into Geneva from Moscow right before meeting the US president. Biden, ending an intensive first foreign trip as president, arrived on Tuesday after summits with NATO and the European Union in Brussels, and a G7 summit in Britain.

Asked if he was ready for Putin, Biden smiled and said: “I’m always ready.”

In an interview with NBC, Putin scoffed at US accusations of dirty tricks abroad and authoritarian crackdowns at home.

As well as denying any connection to what the United States says are Russia-based hacking and ransomware gangs, Putin rejected having any hand in the deaths of many of his opponents during two decades in power.

Addressing one of the main irritants in relations with Washington and with the European Union, Putin insisted he also could not be blamed for the near-fatal poisoning and subsequent imprisonment of Alexei Navalny, one of the few remaining major opposition figures in Russia.

Yuri Ushakov, Putin’s foreign affairs adviser, told journalists in Moscow that the US-Russian relationship was “at an impasse”.

There is “not much” ground for optimism, he added.

Biden says his main goal is simply to establish clear “red lines” for what the White House will no longer tolerate from Russia.

“I’m not looking for conflict,” he said in Brussels after the NATO summit, but “we will respond if Russia continues its harmful activities”.

Biden, who had previously characterised Putin as a “killer”, upgraded the Russian leader to a “tough” and “worthy adversary”.

Going into the summit, Biden has emphasised that he has the backing of his Western partners. 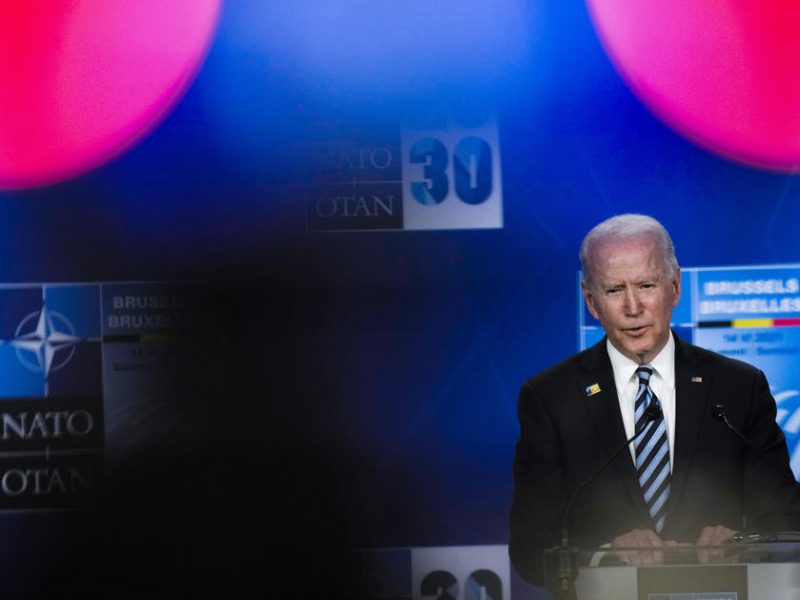 Biden assures he has the allies' backing ahead of Putin meeting

On the eve of his bilateral meeting with Russia’s President Vladimir Putin, US President Joe Biden told NATO allies he would tell Moscow he was not looking for conflict with Russia, but that NATO would respond if Russia continued its …

Russia was one of the top topics at the NATO summit in Brussels, where the defence alliance warned that Russian military build-ups on the edge of eastern Europe “increasingly threaten the security of the Euro-Atlantic area and contribute to instability along NATO borders and beyond”.

But for all the rhetoric, the White House and Kremlin both say they are open to doing business in a limited way. Officials point to the recent extension of the New START nuclear arms limitation treaty as an example of successful diplomacy.

According to Russian and US officials, one possible baby step might be quick reinstatement of the two countries’ ambassadors, who returned home this year in response to tensions.

Officials from the two sides say Biden and Putin will initially huddle only with translators and US Secretary of State Antony Blinken and his Russian counterpart, Foreign Minister Sergei Lavrov. They will then switch to a larger format.

However, unlike in 2018, when Biden’s predecessor Donald Trump met Putin in Helsinki, there will be no joint press conference at the end.

The US side clearly wants to avoid the optics of having Biden sharing that kind of platform with the Russian president.

In 2018, Trump caused a stir by saying, as Putin stood beside him, that he believed the Kremlin leader over his own intelligence services when it came to accusations of Russian interference in the 2016 US presidential election bringing Trump to power.