Biden to Putin: Step back from the brink of war with Ukraine 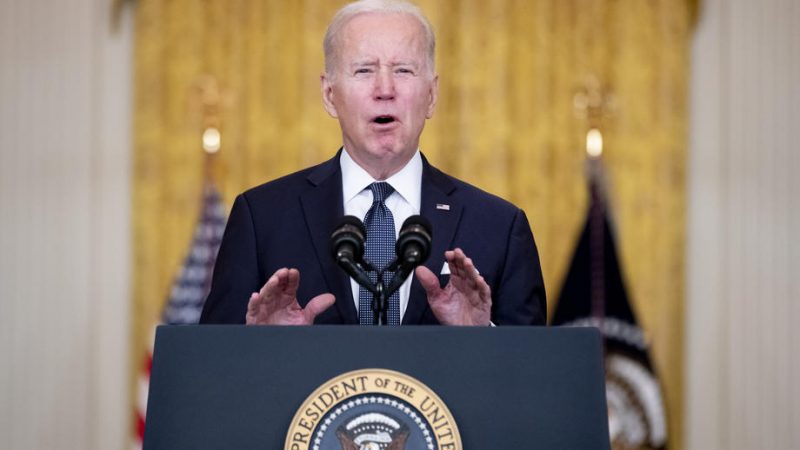 United States President Joe Biden delivers remarks on Russia and the situation in Ukraine, in the East Room of the White House in Washington, DC, USA, 15 February 2022. Biden laid out his administration's approach to easing tensions surrounding the Russian-Ukrainian border. [EPA-EFE/MICHAEL REYNOLDS]

US President Joe Biden made an impassioned appeal to Russian President Vladimir Putin to step back from war with Ukraine on Tuesday (15 February), speaking starkly of the “needless death and destruction” Moscow could cause and international outrage Putin would face.

In a nationally televised speech, Biden said the United States estimates that 150,000 Russian troops now encircle Ukraine, a higher number than previous estimates of about 100,000. He said reports that some forces had withdrawn were welcome, but they were unverified and an invasion remained very much a possibility.

Biden said diplomacy remains a live option to wind down the crisis and urged Russia to engage. If Russia invades Ukraine, the United States and its allies are prepared to respond with penalties aimed at exacting economic pain and global isolation, he said.

“The United States is prepared no matter what happens,” he said.

Much of Biden’s remarks were aimed squarely at Putin, who has demanded that NATO not accept Ukraine as a member and stop any further eastward expansion. Biden’s threats of repercussions for Russia have yet to persuade Putin to back down.

“The United States and NATO are not a threat to Russia. Ukraine is not threatening Russia. Neither the US nor NATO have missiles in Ukraine. We do not, do not have plans to put them there as well. We are not targeting the people of Russia. We do not seek to destabilize Russia,” said Biden.

“To the citizens of Russia: you are not our enemy, and I don’t believe you want a bloody, destructive war against Ukraine,” Biden said.

The human and strategic costs would be “immense” for Russia if it attacks, he said. “The world would not forget that Russia chose needless death and destruction,” Biden said.

The president said the United States is “not seeking direct confrontation with Russia” and that American soldiers were not going to fight in Ukraine. But, he said if Russia were to attack Americans in Ukraine, “we will respond forcefully.”

He warned that a Russian invasion would cause “consequences here at home,” including energy costs.

The speech came on a day that Ukraine said it had been hit by a cyberattack and appeared to blame Russia.

Biden issued a warning for Russia not to engage in cyberattacks.

“If Russia attacks the United States or our allies through asymmetric means like disruptive cyberattacks against our companies or critical infrastructure, we’re prepared to respond,” he said.

Biden spoke to Putin on Saturday and with Ukraine President Volodomyr Zelenskiy on Sunday, and has warned repeatedly of steep costs for Moscow, including sanctions against Russian businesses and oligarchs. But he has laid out a road map for a peaceful resolution, including talks on missile deployments and military exercises to try to reduce tensions in the region.

In his speech, Biden said the United States and its NATO allies are prepared for whatever happens.

“We are ready to respond decisively to a Russian attack on Ukraine, which remains very much a possibility,” Biden said.

Reports that Russia had withdrawn some military units “would be good but we have not yet verified that,” he said.

“Indeed, our analysts indicate that they remain very much in a threatening position,” he said, citing “more than 150,000 troops encircling Ukraine and Belarus and along Ukraine’s border.”