There were cheers for student calls to curb the monarchy’s powers – once a taboo subject – as well as demands for the departure of former junta leader Prime Minister Prayuth Chan-ocha, a new constitution and an end to the harrasment of opposition activists.

Students have led protests almost daily for the past month, but Sunday’s demonstration drew a broader crowd in the Southeast Asian country, which has experienced decades of protests punctuated by military coups. 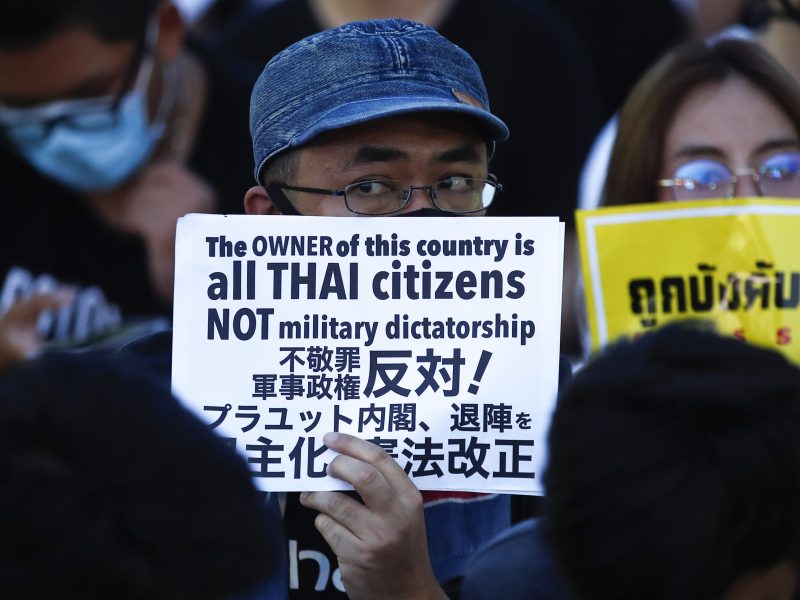 “We want a new election and a new parliament from the people,” student activist Patsalawalee Tanakitwiboonpon, 24, told the crowd. “Lastly, our dream is to have a monarchy which is truly under the constitution.”

Organisers of the Free People movement and police said there were over 10,000 people at the protest.

“The prime minister sends his concern to officials and protesters to avoid violence,” Traisulee Traisoranakul, a government spokeswoman, told reporters. She said Prayuth had also ordered the cabinet to take steps to build understanding between generations.

There was no immediate comment from the Royal Palace.

Prayuth won elections last year that the opposition says were held under rules to ensure that he kept power. The most vocal opposition party was subsequently banned.

Anger has further been fuelled by accusations of corruption, the arrest of some student leaders over earlier protests and the economic fallout from the coronavirus epidemic.

“We are seeing a shift in strategy of the youth-led movement becoming more inclusive,” said Titipol Phakdeewanich, dean of political science at Ubon Ratchathani University, citing their emphasis on the economy as well as politics.

Some student groups have also presented 10 reforms they seek to the monarchy of King Maha Vajiralongkorn – including curbing his powers over the constitution, the royal fortune and the armed forces.

“Down with feudalism, long live the people,” protesters chanted. “We will no longer be dust for anyone.”

Thailand’s lèse-majesté law sets a penalty of up to 15 years for criticising the monarchy, but Prayuth has said the king requested that it not be used for now.

As the anti-government protest got underway, several dozen royalists also held a demonstration, waving national flags and holding up gold-framed portraits of the king and other royals.

“I don’t care if they protest against the government but they cannot touch the monarchy,” said Sumet Trakulwoonnoo, a leader of the royalist group, Coordination Center of Vocational Students for the Protection of National Institutions (CVPI).

Critics accuse the monarchy of helping extend the army’s hold on politics in Thailand, where there have been 13 successful coups since the end of absolute royal rule in 1932.

Before the 2014 coup, Bangkok was roiled by more than a decade of often violent clashes between yellow shirt royalist protesters and rival red shirts loyal to former prime minister Thaksin Shinawatra.

The new wave of protests has not been violent so far.

“I am old now and can never achieve my goal,” said former red shirt protester Ueng Poontawee, 62. “Now there are new faces. I am very happy they came out.”

After the more than nine-hour protest dispersed, a group of the activists marched to a nearby police station to challenge officers to arrest them if there were warrants against them on charges of organising previous protests.

The police did not arrest anyone and the activists then left. Police made no comment to media.

Three student leaders have been charged over accusations of breaching restrictions in organising previous protests. They have been released on bail, but police say arrest warrants have been issued for a further 12 protest leaders while others are under investigation.