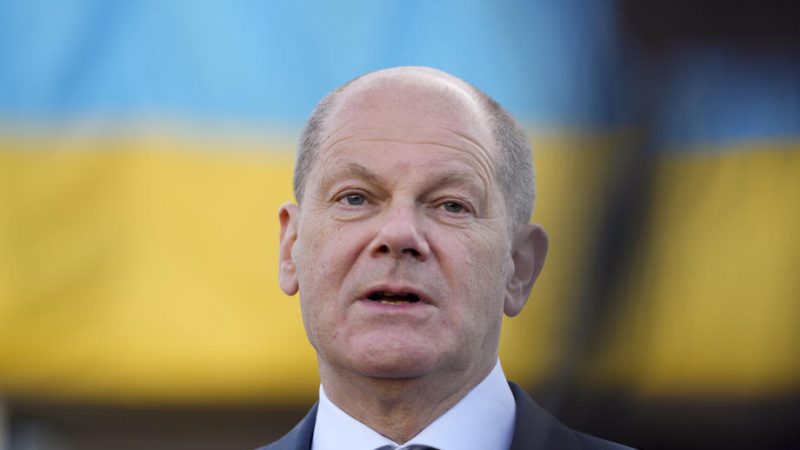 German Chancellor Olaf Scholz is seen with the Ukrainian flag in the background during his visit to the 'Blue Yellow Cross Club' and meeting with a Ukrainian women's soccer team in Cologne, Germany, 13 May 2022. [EPA-EFE/ddp / POOL]

This article was updated with a quote from the telephone call between Scholz and Zelenskyy held on 18 May.

Russia will not get away with trying to redraw Ukraine’s borders by creating facts on the ground and waiting out Kyiv and its allies, German chancellor Olaf Scholz said on Monday (16 May), insisting that the West would not stand for a “diktat,” or dictated, peace forced on the country.

Ukraine’s President Voldomyr Zelenskyy said last week that Kyiv would not trade territory for peace with Russia, telling Italy’s RAI television that he had been asked by French President Emmanuel Macron to consider doing so.

In the interview Zelenskyy ruled out suggestions – which he attributed to Paris – that Ukraine should make concessions for the sake of securing a peace agreement that would allow Putin to save face. 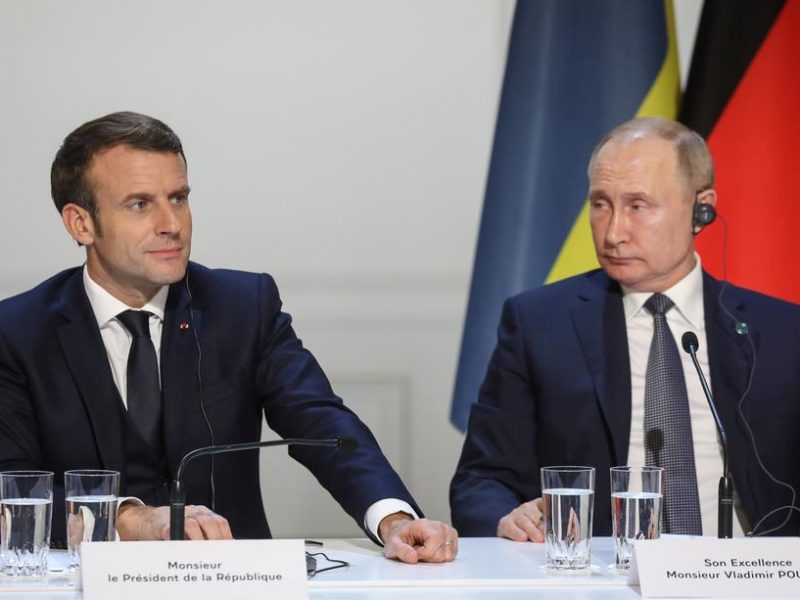 Macron says EU is not at war with Russia, warns against ‘humiliating’ Putin

Europe must learn from its past mistakes and make sure no side is humiliated when Russia and Ukraine negotiate for peace, France’s president said on Europe Day (9 May) in Strasbourg.

“Get out of this territory that you have occupied since 24 February,” he said. “This is the first clear step to talking about anything.”

Zelenskyy said Kyiv had offered to keep Crimea out of talks for now if it complicated efforts to end the war or made talks between him and Putin more complicated. But he added: “We will never recognise Crimea as part of the Russian Federation.”

The French government has denied that any such suggestion for territorial concessions had been made.

On Monday, Scholz said that such stealth border changes would not be accepted by the West if Ukraine objected to them.

“There is only one way out of this for Russia and that is reaching an agreement with Ukraine,” he told RTL television. “And that doesn’t mean a diktat peace, taking a bit of territory and then saying ‘sign here’.

“And it also won’t work as in the case of Crimea, where the war is over in the sense that there is no more shooting, but a new border has been drawn, and then they wait until everything goes back to normal,” he added.

Russia annexed Crimea in 2014 and has since claimed a sovereignty over the Black Sea peninsula. Russia’s claim is rejected by Kyiv and all but a handful of other countries.

Weapons deliveries to help Ukraine defend itself from Russia’s invasion and sanctions against Moscow were designed to make it clear that “an agreement with Ukraine is unavoidable, and there is no way around this for President (Putin).”

A readout from Tuesday following a telephone conversation between Scholz and Zelenskyy also focused on the conditions for a peace agreement.

“A diplomatic negotiated solution between Ukraine and Russia requires an immediate end to hostilities on the part of Russia and a withdrawal of Russian troops from Ukraine”, Scholz is quoted as having said.

Moscow calls its invasion of Ukraine a “special military operation” to rid the country of Nazis, an assertion Kyiv and its Western allies say is a baseless pretext for an unprovoked war.