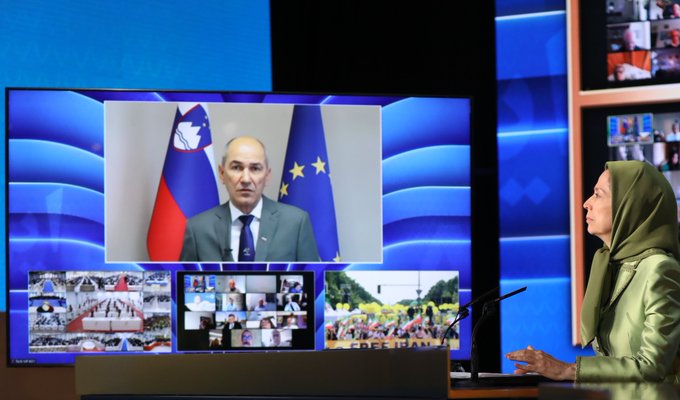 EU foreign policy chief Josep Borrell on Monday (12 July) sought to distance the bloc from comments made by Slovenia’s Prime minister at a meeting of an Iranian opposition group that enraged Tehran.

Janša told the meeting in an online message that the “Iranian people deserve democracy, freedom and human rights, and should be firmly supported by the international community”.

He also demanded that the “Iranian regime must be held accountable for human rights violations”.

Borrell said the statements from the Slovenian leader did “most definitely not” reflect the EU’s position, despite the country currently holding the bloc’s rotating six-month presidency.

“The EU’s position when it comes to Iran is balanced,” Borrell said after a meeting of EU foreign ministers in Brussels.

“We believe in bringing to bear political pressure when necessary in lots of areas and at the same time trying to find cooperation when necessary.”

Iran’s Foreign Minister Mohammad Javad Zarif had on Sunday called on the EU “to clarify its stance” in a phone call with Borrell, Tehran said.

EU ties with the Iran are currently at a highly sensitive moment as the bloc is seeking to broker the return of the United States to the 2015 nuclear deal with Tehran at long-running talks in Vienna.

We call for clarification on PM Janez Janša’s participation in a meeting sponsored by the People’s Mujahideen Organisation of Iran!