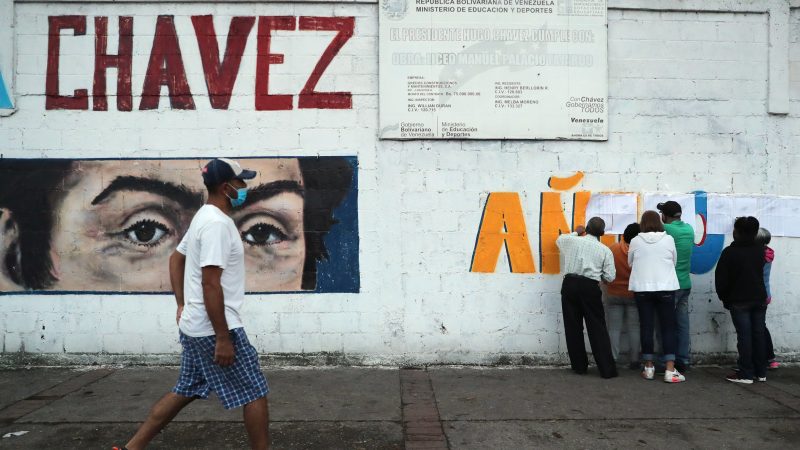 People check for their names outside a polling station in Caracas, Venezuela, 6 December 2020. [Miguel Gutierrez/EPA/EFE]

President Nicolás Maduro seized total control of Venezuela’s political institutions on Sunday (6 December) with a sweeping victory in legislative elections that were boycotted by the main opposition parties.

Maduro and his left-wing allies had 67.7% of the vote with over 80% of ballots counted, while the opposition bloc which broke the boycott had 18%, National Electoral Council president Indira Alfonzo said.

Turnout was low with 69% abstaining.

It further weakened US-backed opposition leader Juan Guaidó, who led the boycott after calling the vote “a fraud”.

Maduro told reporters after voting in Caracas’ main military barracks that it was time to end the opposition’s domination of an assembly responsible, he said, for “the plague of sanctions, cruelty, pain and suffering.”

US Secretary of State Mike Pompeo denounced the polls as “a fraud and a sham” engineered by Maduro.

“The results announced by the illegitimate Maduro regime will not reflect the will of the Venezuelan people,” wrote Pompeo on Twitter.

Brazilian Foreign Minister Ernesto Araujo tweeted that the vote was an “electoral farce” and an attempt by the Maduro “dictatorship” to legitimize its rule.

Canada and the Organization of American States said they would not recognize the result.

“Canada will always stand with the people of Venezuela in their fight to restore democracy,” Foreign Minister Francois-Philippe Champagne said.

Washington, Guaidó’s main ally, is leading pressure to oust Maduro with economic sanctions, including an oil embargo in force since April 2019.

Maduro called on the opposition “with one voice, to ask the new US government of Joe Biden to lift all the sanctions.”

The opposition has controlled the National Assembly since 2015.

Maduro sidelined the body in 2017 by creating an all-powerful Constituent Assembly stacked with his supporters. The Supreme Court meanwhile declared legislation passed by the National Assembly null and void.

The election, contested by about 14,000 candidates from more than 100 parties, comes with the country in a deep political and economic crisis — suffocated by runaway inflation, paralyzed in endless queues for petrol, lacking water and gas supplies, and afflicted by sudden power cuts.

Venezuela has been hard-hit by the Covid-19 pandemic, and voters were required to wear masks inside polling stations, where the floors bore markings to ensure social distancing was maintained.

The longest lines were in Socialist Party bastions such as the 23 de Enero neighborhood in Caracas.

In some cities, however, there were more people joining the ever-present lines at gas stations than to vote, reflecting the country’s crippling economic crisis.

“This is a humiliation, I’m not going to vote,” Jose Alberto told AFP after waiting for hours at a gas station.

Maduro, a former bus driver who became president on the death of his mentor Hugo Chavez in 2013, was re-elected in 2018 in fraud-tainted polls — also boycotted by opposition parties — a victory that much of the international community branded illegitimate.

The United States, the European Union and many Latin American countries have long blamed Venezuela’s crippling economic crisis on Maduro’s repression and misrule.

They backed Guaidó when the National Assembly speaker proclaimed himself interim president in January of last year.

Guaidó, 37, called on voters to stay at home on grounds that “free and fair” conditions for holding elections do not exist.

“Maduro’s objective isn’t even to gain legitimacy,” he told AFP in an interview this week, adding that the goal was instead to simply wipe out all semblance of democracy.

Guaidó and his allies plan a week-long plebiscite from Monday seeking public support to prolong the mandate of the current National Assembly until “free, verifiable and transparent” elections can be held.

However, the results will not be binding, as Maduro exercises control of the country’s institutions, including the Supreme Court and the powerful military.

Initial enthusiasm that greeted Guaidó’s push for power has waned, and critics now see his plebiscite ploy as a desperate gamble.

Defeat is likely to leave Guaidó increasingly isolated, analysts say — not least because he will lose the leadership of the National Assembly, on which he based the legitimacy of his presidential ambitions.

Maduro’s victory will be greeted by his foreign allies Russia and China as lending his regime legitimacy, as well as a legal framework to their agreements that help circumvent US and EU sanctions, analysts say.

Some opposition dissidents who criticized Guaidó for calling the boycott took part in the election, despite being accused of lending Maduro legitimacy.

“They are going to represent the new opposition after 5 January” when the new legislature takes office, said political scientist Jesus Castillo.