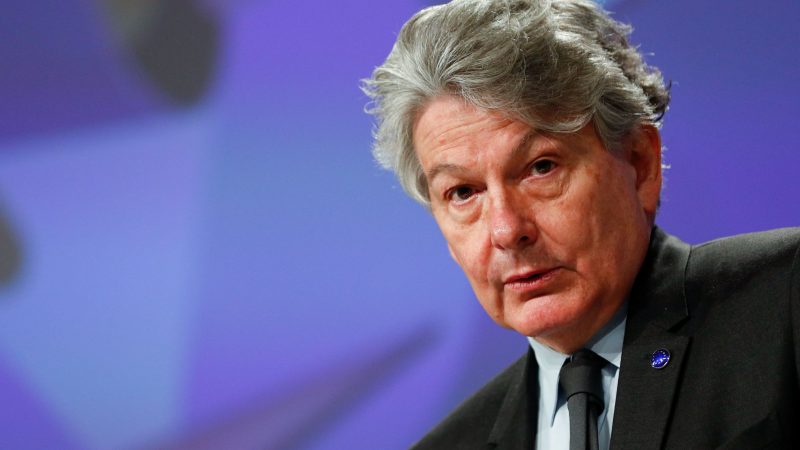 AUKUS is an acronym for the trilateral deal between Australia, the United Kingdom, and the United States, announced on 15 September 2021, under which Australia chose nuclear-powered submarines with US and UK technology, scrapping a $40 billion submarine deal with France.

European Commissioner Thierry Breton said on Tuesday (21 September) that disruptions in transatlantic ties have been building up for years and cannot be reduced to just frustration over the submarine snub.

This would be a “growing feeling … that something is broken in our transatlantic relations”, he said, referring to a series of surprises from the Biden administration in recent months, ranging from Biden administration’s failure to communicate about the withdrawal of US forces from Afghanistan, its long continuation of Trump-era travel restrictions, to last week’s AUKUS deal.

“This feeling is unfortunately increasing,” he told reporters in Washington. “It’s not right to think it is just because of what happened last week. It’s much broader than that.”

Breton also cautioned against reading too much into any possible postponement of the new US-EU Trade and Technology Council meeting, saying next week’s event was not expected to produce significant results.

The first meeting of the Trade and Tech Council was initially scheduled for 29 September, in Pittsburgh.

“There are many voices in the French apparatus arguing for a response to the Australian attitude,” a French official told EURACTIV France.

At the same time, the recall of ambassadors to Australia and the US has indicated the extent of AUKUS anger in France and no date for their return has been set yet, the same official said.

French Army ministry’s spokesperson, Hervé Grandjean, called out Australia of ‘making a mistake‘ and sending incoherent messages what kind of submarines it wants.

According to him, the Australians sent a letter to Paris a few hours before breaking the contract, saying that they were “satisfied with the performance achievable by the submarine and with the progress of the program”.

A “clarification” phone call interview is scheduled before the end of the week between US President Joe Biden and his French counterpart Emmanuel Macron.

“The submarine component of this partnership raises more questions than it answers and the reason for this partnership, more than the technology, is a way for Canberra to confirm its rapprochement with Washington as Australia faces increasing tensions with Beijing,” Pierre Morcos, a visiting Fellow at Center for Strategic and International Studies (CSIS) told EURACTIV France.

Speaking about the US-UK-Australia triangle, Morcos said “there is also fear to see divergences as to the strategy to be adopted in the Indo-Pacific, since this trilateral security partnership puts a lot of emphasis on military competition with China.”

“We see these dynamics breaking down, a logic of competition between the different players that is almost to China’s benefit,” he said.

Yet, according to him, France until now, was certainly aware of the military stakes with regard to Beijing but also wished to have a much broader approach to propose a counter-model to China by investing in connectivity, trade, maritime safety and environmental issues – an approach supported by all Europeans.

“It confirms the French desire to strengthen European strategic autonomy as this is another example that putting itself in a relationship of dependence with the United States is dangerous,” Morcos said.

“It was obvious under the Trump administration, it was a little less so under the Biden administration, but behind Washington’s reassuring words, there are transactional and unilateral logics that remain the same,” he added.

The advantage of nuclear over conventional

Defence experts believe that the new class of nuclear-powered submarines would give the US and its allies a new tool to attempt to contain Chinese military expansion in the Indo-Pacific, adding to the current deployment of a British aircraft carrier to the region, and recent transits by French and German warships to the South China Sea.

“The US and UK have long partnered on their nuclear-powered submarine programs, with taking Australia in and going for nuclear-powered (UK-US) instead of conventional (French) it would indeed be adding a tool the region is currently lacking,” one defence expert recently told EURACTIV.

While most countries with significant defence industries rely on exports, France usually secures exports in a pro-active approach that involves not just defence industry representatives lobbying for them, but politicians, including the president.

For France, the cancellation of its submarine deal has presented a painful blow to its hi-tech defence industry.

Australia is making a mistake because, “the programme was on time” contrary to what is said, and “the purpose of this contract was to give industrial and defence sovereignty to Australia”, Philippe Missoffe, managing director of Groupement des Industries de Construction et Activités Navales (GICAN), a federation that together more than 210 companies from the French naval industry, told EURACTIV France.

He called the move “purely political and strategic” and said it has nothing to do with what French defence industry has to offer.

As part of the contract, Missoffe said some companies had decided to make investments in Australia or set up joint ventures there. Although these companies do not exclusively rely on this contract, they have to take the blow.

The French industry official also called on the EU to engage more in the conversation.

“Not defending the [French fighter jet] Rafale, not purchasing French ships, not choosing weapons systems such as MBDA and preferring the Patriot, is to undermine Europe and all the countries that are part of it”, Missoffe added.

“This implies France sees European strategic autonomy as protecting and extending its own sovereign power and industrial interests rather than as a process for EU members to achieve more together in security and foreign policy than they can alone – thereby undermining rather than enhancing its case,” Robin Niblett, director of Chatham House, commented.