Three Bundestag MPs met with EU Commissioner Günther Oettinger earlier this year to lobby for the Commission to use the German language more after Brexit. [European Commission]

Oettinger, who was recently appointed Commissioner for the Budget, presented his first annual budget in the European Parliament’s budget committee and took some questions from the press.

22 Bn Euro more in 2018 to cope with Migration issues in the EU: Commissioner Oettinger's presentation of the draft budget in the Committee pic.twitter.com/fKVbFsQNTb

The draft budget for 2018 contains €161 billion in commitments and €145.4bn in payments. The Commission labelled it an exercise in stimulating job creation, especially for young people, and boosting growth and strategic investments. Commitments for 2018 are up 1.4% from 2017, and payments up 8.1% from 2017.

Commitments are the total volume of promises for future payments that can be made in a given year. Payments are the actual money paid in a given year from the EU budget to cover commitments. Commitments must be honoured with payments, either in the same year or, particularly in the case of multi-year projects, over the following years.

Replying to a question regarding the 8.1% increase in payments, he explained that this was not a hike for the UK before Brexit, but a result of the 2014-2020 EU structural and investment programmes reaching cruising speed in 2018, after a slow start in the first years.

The commissioner said that the draft budget had taken account of recommendations from the Parliament and the member states, by increasing the amounts allocated for the Erasmus+ programme, as well as for Horizon 2020. Also, the European Solidarity Corps, a new initiative which provides volunteering placements, traineeships and job offers for 2-12 months, is getting its own budget for the first time.

Oettinger said he believed the draft budget was realistic and capable of addressing the challenges the EU faces. He mentioned youth unemployment, the refugee crisis and terrorism among those challenges. This includes the money the EU is paying Turkey to help the country cope with the effort of hosting Syrian refugees on its soil, the Commissioner explained.

European Union countries approved yesterday (3 February) funds for Turkey to help refugees and migrants in the country in exchange for Ankara ensuring fewer of them venture out towards Europe.

A novelty: €40 million for defence

One novelty in the draft 2018 budget was an envelope of €40 million for defence research, which in the German Commissioner’s words opened the chapter of common financing for a future defence policy.

He said that more flexibility between financial years and within a financial year, as well as between different budget headings, would be achieved when the mid-term budget review was approved. Currently the midterm review of the 2014-2020 budget is blocked by the UK. 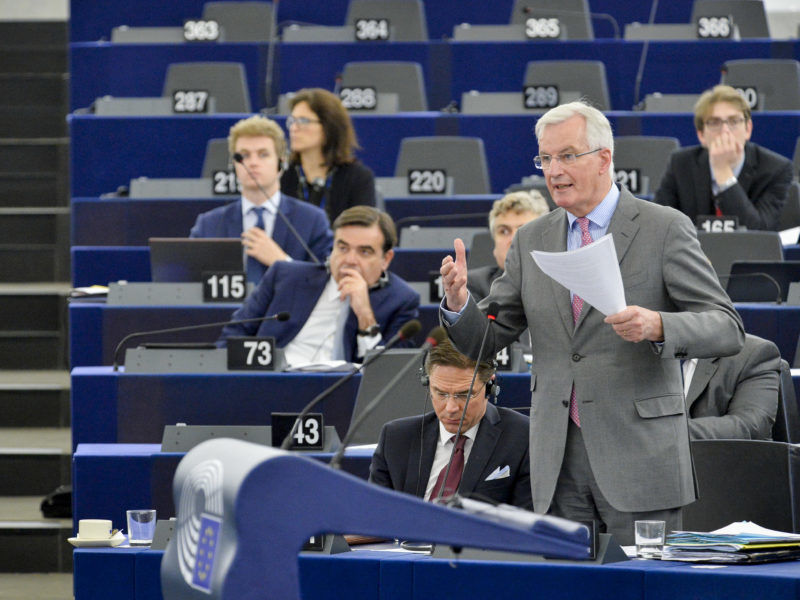 Adopted after bitter wrangling by the European Parliament last December, the revision of the EU’s long-term budget for 2014-2020 has now been blocked by the United Kingdom, which seems intent on laying obstacles on the EU’s road. EURACTIV France reports.

“The UK government has told us, and we respect this, that in the UK there is a principle that during a general election campaign the government cannot take any decision of political significance,” Oettinger said.  He insisted that the Commission had heard only “formal reasons” for this situation, and no objections of substance, therefore he expected unanimity to be found in the Council after 8 June, even if London abstains.

Midterm review to be adopted with 2018 budget

He also said that the expectation was that the draft budget for 2018 would be adopted together with the midterm review, which would allow the EU executive to meet its duties and tasks. But he added that in a parallel communication the Commission had informed the Parliament and the Council of “the huge disadvantages” that could arise in case of a UK veto after the 8 June elections.

EURACTIV asked Oettinger how he expected the UK to approve the €40 million for research in the defence sector, as the country opposes a coordinated EU defence strategy. The Commissioner replied that a reflection paper was in preparation, focused on introducing efficiency through further cooperation in defence. However, he said nothing regarding the UK positions.

Asked about the next multiannual EU budget, which will start in 2021 and will run for five, six or seven years, Oettinger said the Commission was under the obligation to present a draft by the end of the current year, but there were two obstacles. The first was the Brexit process, and the second the discussion about the future of Europe, which could lead in different directions: “more” or “less” Europe would each have direct implications on the budget.

He said he would hold discussions with ministers of the member countries and with the European Parliament on whether it would not be wiser to submit a budget by summer next year, which would take stock of the consequences of Brexit and of the discussions on the future of Europe.

Conditionality for disbursement of funds

Oettinger was also asked about his views on attaching extra conditionality to the disbursement of EU funds to countries in breach of EU rules.

He started by saying that this was not a subject for one financial year, but for the Multiannual Financial Framework. Then he said that in the Council, where all member states sit, not all were convinced of the economic sense of all the programmes the Commission is financing. He said that the executive was regularly coming up with country-specific recommendations, which identified weaknesses in individual member states and contained recommendations for national or regional policies.

He added that the EU executive was currently exploring whether the country-specific recommendations could be used “as a blueprint, as a compulsory document” which could allow a “certain degree of conditionality”.

Oettinger also mentioned the conditionality between cohesion programmes and rule of law, and said there too, the Commission would propose options.