Little clue has been given by Britain on how it plans to respond after Iranian Revolutionary Guards rappelled from helicopters and seized the Stena Impero in the Strait of Hormuz on Friday in apparent retaliation for the British capture of an Iranian tanker two weeks earlier.

Footage obtained by Reuters from an Iranian news agency on Sunday showed the tanker docked in an Iranian port — with Iran’s flag now hoisted atop.

The EU stated on Saturday that the seizure of the two ships risks further escalation and undermine ongoing work to resolve tensions between Iran and the West.

The seizure of two ships by Iranian authorities in the Strait of Hormuz is of deep concern. In an already tense situation, this development brings risks of further escalation and undermines ongoing work to find a way to resolve current tensions. https://t.co/U6D03tOcjr

The British government is expected to announce its next steps in a speech to parliament on Monday. But experts on the region say there are few obvious steps London can take at a time when the United States has already imposed the maximum possible economic sanctions, banning all Iranian oil exports worldwide.

“We rant and rave and we shout at the ambassador and we hope it all goes away,” said Tim Ripley, a British defence expert who writes about the Gulf for Jane’s Defence Weekly.

“I don’t see at this point in time us being able to offer a concession that can resolve the crisis. Providing security and escort for future ships is a different matter.”

A day after calling the Iranian action a “hostile act”, top British officials kept comparatively quiet on Sunday, making clear that they had yet to settle on a response.

“We are going to be looking at a series of options,” junior defence minister Tobias Ellwood told Sky News. “We will be speaking with our colleagues, our international allies, to see what can actually be done.

“Our first and most important responsibility is to make sure we get a solution to the issue to do with the current ship, make sure other British-flagged ships are safe to operate in these waters and then look at the wider picture.”

The Iranian capture of the ship in the global oil trade’s most important waterway was the latest escalation in three months of spiralling confrontation with the West that began when new, tighter U.S. sanctions took effect at the start of May.

Washington imposed the sanctions after President Donald Trump pulled out of a deal signed by his predecessor Barack Obama, which had provided Iran access to world trade in return for curbs on its nuclear program.

European countries including Britain have been caught in the middle. They disagreed with the US decision to quit the nuclear deal but have so far failed to offer Iran another way to receive the deal’s promised economic benefits.

Britain was thrust more directly into the confrontation on 4 July, when its Royal Marines seized an Iranian tanker off the coast of Gibraltar. Britain accused it of violating sanctions on Syria, prompting repeated Iranian threats of retaliation. 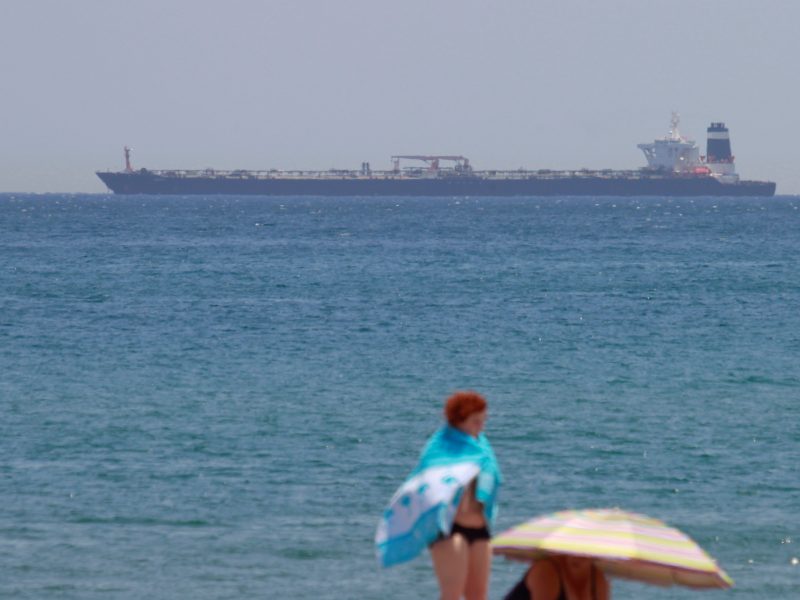 While Iran’s official line is that its capture of the Stena Impero was because of safety issues, it has done little to hide that the move was retaliatory. The tactics it used — with masked troops rappelling from helicopters — matched those the British had used two weeks before.

Parliament speaker Ali Larijani spelled it out more clearly on Sunday, telling a parliament session: “The Revolutionary Guards responded to Britain’s hijacking of the Iranian tanker.”

“Having failed to lure @realDonaldTrump into War of the Century … @AmbJohnBolton is turning his venom against the UK in hopes of dragging it into a quagmire,” Zarif wrote on Twitter. “Only prudence and foresight can thwart such ploys.”

In a letter to the UN Security Council, Britain said the Stena Impero was approached by Iranian forces in Omani territorial waters, where it was exercising its lawful right of passage, and that the action “constitutes illegal interference”.

Britain’s warship in the Gulf, the HMS Montrose, contacted an Iranian patrol vessel in an effort to ward off a boarding of the Stena Impero, according to radio messages provided to Reuters by maritime security firm Dryad Global.

“Please confirm that you are not intending to violate international law by unlawfully attempting to board,” the Montrose said in the radio message.

The Iranian patrol boat is heard instructing the Stena Impero to alter course. Responding to the Montrose, it says it intends to “inspect the ship for security purposes”.

Defence expert Ripley noted that Iran’s choice of target appeared to have been calibrated to test Britain’s response without provoking a bigger crisis.

Unlike the Iranian tanker seized a fortnight earlier, which was carrying a valuable cargo of 2 million barrels of oil, the Stena Impero was on its way to the Gulf and empty at the time it was seized. The 23 crew are mainly Indians and include no British citizens, the presence of which might have led to calls in London to take more drastic action, Ripley said.

He added that Iran is likely to view any British response through the wider prism of its conflict with the United States.

“If the Americans are going to continue to enforce this embargo, there’s no incentive for the Iranians not to take more tankers. What have they got to lose?” said Ripley.

An Iranian official who asked not to be identified made a similar point.

“Iran is displaying its power without entering a military confrontation,” the official said. “This is the result of America’s mounting pressure on Iran.”