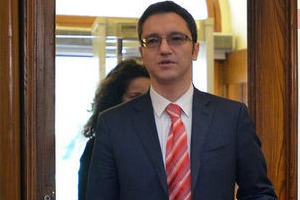 The Bulgarian foreign minister, Kristian Vigenin, has been instructed by his ruling Socialist party “not to haste with harsh measures” against Russia following the Crimea referendum, as EU ministers gather in Brussels in an attempt to impose sanctions on Moscow.

Vigenin, who was an MEP before he took the job of foreign minister last May, was harshly criticised by his fellow socialists for having declared that Bulgaria would not recognise the Crimean referendum and for having visited Ukraine and meeting with the country’s new leaders. The Bulgarian Socialist Party (BSP) is the leading partner of the country’s minority government.

BSP leader Sergei Stanishev, who is also the president of the Party of European Socialists, said that Bulgaria “should not be among the hawks in the European Union” towards Russia.

“Besides the common position of the European countries we have our national interests," said Stanishev in comments reported by the daily Standart. "First, they reflect the fact that we have between 250 and 300 thousand ethnic Bulgarians in Ukraine. We are close geographically to the region. In case of destabilisation we would be the first to suffer," he said.

The BSP leader also remarked that that Bulgaria depended on energy supplies from Russia and of the income brought by Russian tourists.

“All this must be taken into account when forming the Bulgarian national position and behavior in this matter," said Stanishev.

Bulgarian socialists appear to be supportive of Russia’s intervention in Crimea. Alexander Simov, a journalist from the Socialist daily Duma who was sent to Crimea as an observer, said yesterday he believed that the referendum vote was legitimate.

"I am going to watch the whole process. To see … that it is a legal referendum," he said. "So I think it is going to be very legal," Simov said, as quoted by the Voice of America. Simov’s name appears on the list of the BSP candidates for the European elections.

The news from Sofia puts in doubt the EU's ability to finalise a deal on sanctions against Russia as foreign ministers meet in Brussels today. Unanimity among the 28 EU member states is needed for taking a decision.

According to the draft meeting conclusions, seen by EURACTIV, the most important element of the document is in square brackets, meaning it has not been agreed by ambassadors before the ministers' arrival.

The respective text reads: “The Council recalls the statement of the EU Heads of State and Government of 6 March which set out that negotiations between Ukraine and Russia needed to start within a few days, including through multilateral mechanisms, and produce results within a limited timeframe.

"[In light of the developments of last week, and in the absence of any such results, the Council has decided to introduce additional measures, including travel restrictions and an asset freeze against persons responsible for actions which undermine or threaten the territorial integrity, sovereignty and independence of Ukraine, including actions on the future status of any part of the territory which are contrary to the Ukrainian Constitution, and persons, and entities associated with them. The Council has furthermore decided to cancel the EU-Russia Summit scheduled to take place in Sochi in June this year.]”

According to press articles, Hungarian Foreign Minister János Martonyi said on Thursday that if the European Union put in place the third phase of sanctions against Russia, a “long economic war” could ensue, with grave impacts on Hungary.

Asked whether this would mean that Hungary would oppose sanctions at today’s meeting, a Hungarian diplomat reminded EURACTIV that his country, together with the Visegrad group, had likened the events in Crimea to the 1956 crackdown by the Soviet army of the Budapest uprising and of the 1968 invasion by the Warsaw Pact of Czechoslovakia.

The Visegrad or V4 group consists of Poland, the Czech Republic, Slovakia and Hungary.