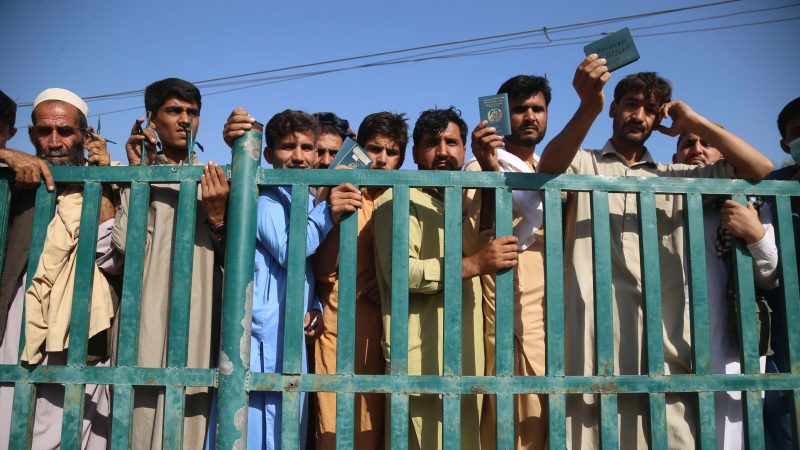 As Afghanistan faces a looming humanitarian crisis following the Taliban's takeover, the country's neighbours are worried about security threats and increased refugee waves coming across their borders. [EPA-EFE/GHULAMULLAH HABIBI]

Over the past two days, leaders from the region held talks in the Tajik capital Dushanbe – most notably at the Russia and China-led Shanghai Cooperation Organization (SCO) summit – with the main focus on the regional repercussions from the Afghanistan crisis.

The SCO currently consists of China, Russia, Kyrgyzstan, Kazakhstan, Tajikistan, Uzbekistan India and Pakistan.  Tajikistan is the only country in the region that had not engaged in talks with the Taliban prior to their takeover.

Afghanistan holds observer status at the SCO, but Russia’s foreign minister Sergey Lavrov said that the Taliban had not been invited to observe proceedings in the Tajik capital, TASS news agency reported.

“Nobody is hurrying to give full recognition to the Taliban,” Lavrov was quoted as saying.

Both Russian President Vladimir Putin, and his Chinese counterpart Xi Jinping, did not attend the talks in person, though to observers in the region it is clear that both intend to position themselves as key security stakeholders after the fall of Kabul and waning Western influence.

Speaking at the SCO summit, Tajik President Emomali Rahmon called for “bolstering the capability of the SCO’s regional anti-terrorist structure and stepping up the interaction of our countries’ law enforcement agencies and special services” to counter the “challenges and threats” coming from Afghanistan.

Kazakhstan’s President Kassym-Jomart Tokayev proposed the organisation of a hub in the southeastern Kazakh city of Almaty for international aid to Afghanistan, while Uzbek President Shavkat Mirziyoev called for the unfreezing of the country’s assets kept in foreign banks to facilitate dialogue with the Taliban-led government.

Members of the Collective Security Treaty Organization (CSTO) held military exercises in Kyrgyzstan in recent weeks in response to the current security situation.

Tajikistan conducted military manoeuvres with Russia and Uzbekistan, while the latter also held separate drills with Russia along the Uzbek-Afghan border.

Europeans, meanwhile, since the start of the crisis have expressed fears that a fragile Afghanistan could have the potential to destabilise the region.

In August, EU’s chief diplomat Joseph Borrell said the bloc should provide financial support to countries neighbouring Afghanistan, while Austria, Germany and some other member states have also floated the idea of relying on Central Asia to limit refugee flows from Afghanistan to Europe.

EU diplomats in the region for now, however, do not see a danger of Afghanistan migration  destabilising the region in the short term, as potential Central Asian migration pathways – through Tajikistan, Uzbekistan or Kazakhstan – would not represent the ‘classic routes to the West’.

“The situation in Afghanistan brought among others also concerns related to regional stability, security and potential terrorist threats, that is why we engage with the partners in the region to try to face off these challenges jointly,” EU’s lead foreign affairs spokesperson, Peter Stano, told EURACTIV.

He also confirmed that EU diplomatic efforts with stakeholders in the region are ongoing, and every day there would be “more and more of them at various levels”, with partners in Pakistan, Iran, Iraq and beyond, while European Council President Charles Michel has reached out to Central Asian republics and other partners.

“One of the five benchmarks the EU has formulated for future potential dealings with the future Afghan authorities is the need to prevent Afghanistan to be a breeding ground and export place for terrorism,” Stano added.

Asked by EURACTIV whether he believes the situation around Afghanistan will make Central Asia more strategically important to the EU, Luxembourgish foreign minister Jean Asselborn said it would “be wrong to say that it is up to Central Asian countries to solve the Afghan crisis and the subsequent migration crisis”.

“We can’t possibly think that if we close our borders to those poor people that are fleeing for their lives we are going to solve anything,” he said.

“I really think that the EU must be present and sensitive to those who in the name of the EU and democracy are in danger,” Asselborn added.

At the same time, unrelated to Afghanistan, there is notable frustration and incomprehension among EU diplomats in the region that Brussels is not, in general, paying more attention to the region, EURACTIV has learnt.

The EU’s Central Asia strategy update, presented in 2019, remains vague as to the region’s importance to the EU, which draws from its strategic location, energy resources, and the EU’s interests in regional security vis a vis Russia and China.

The scope of EU relations is linked to the readiness of individual Central Asian countries to undertake reforms, the European Commission has stated.

However, in the strategy, the EU played down concerns that Beijing is slowly gaining control over strategic infrastructure important to its internal security agenda

“The biggest issue is the fact that Central Asia is not part of DG NEAR,” an EU diplomat lamented to EURACTIV.