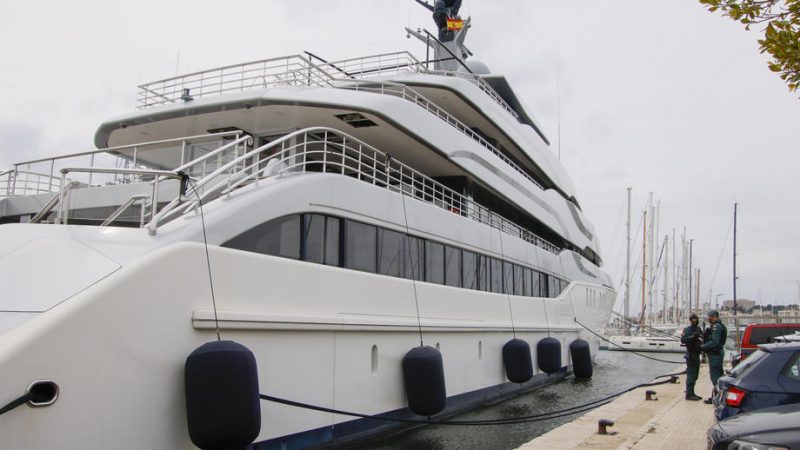 Civil Guards officers search the yacht 'Tango', which belongs to Renova Group head Viktor Vekselberg, in the port of Palma de Mallorca, Spain, 4 April 2022. The yacht was seized by authorities in concordance with sanctions imposed against Russian oligarchs and their assets being frozen in response to the Russian invasion of Ukraine. [EPA-EFE/CATI CLADERA]

The EU should confiscate and sell Russian assets it has seized and use the proceeds to rebuild war-scarred Ukraine, EU chief Charles Michel said in an interview published Thursday (5 May).

The suggestion echoes an idea already floated in the United States, and comes as EU and US task forces hunt down and grab yachts, mansions, bank accounts, helicopters and artworks owned by Russian oligarchs sanctioned by the West.

The EU said early last month it had frozen €30 billion in assets linked to blacklisted Russian and Belarusian individuals. The question now is what to do with those assets.

“Personally, I am absolutely convinced that this is extremely important not only to freeze assets, but also to make possible to confiscate it, to make it available for the rebuilding of the country (Ukraine),” Michel, president of the European Council, told the Interfax-Ukraine news agency.

He was the first high-ranking EU official to propose the confiscation of oligarchs’ assets, his spokesman confirmed to AFP.

Ukraine’s government in April estimated the cost of rebuilding after the war to be at least $600 billion (€565 billion).

The EU, US, Britain and Canada have been steadily expanding their lists of wealthy sanctioned Russians deemed to influence or profit from Moscow’s invasion of its pro-Western neighbour.

But the American Civil Liberties Union has warned any legislation in that sense could violate due-process protections, as the targeted oligarchs would have no recourse to challenge the confiscations.

Confiscation of sanctioned individuals’ assets “is not so simple” and would be “a difficult and long process,” he said.

But he said he has tasked the European Council’s legal service to come up with ways of making it work “in line with the principles of rule of law”.