Child labour eradication is a priority for new Commission 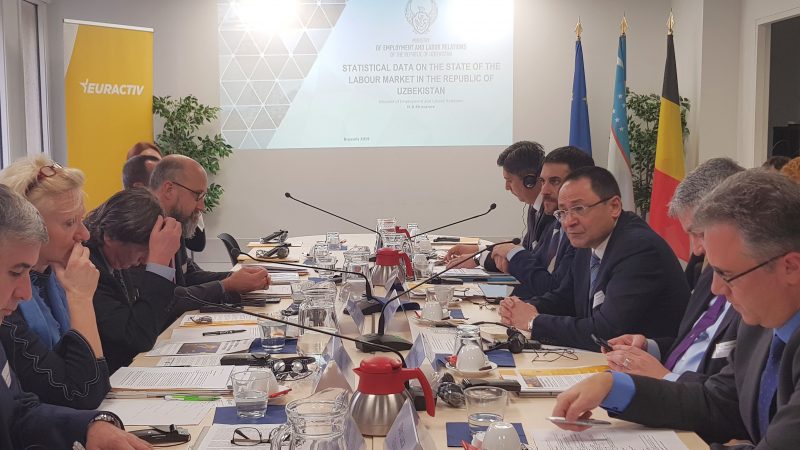 Participants at the EURACTIV event 'Clothing imports to the EU: Achieving sustainability and transparency in the supply chain'. [EURACTIV]

Eradication of child labour through higher standards and better enforcement of trade deals is a priority of the new European Commission, whose representative told a EURACTIV event there have been “significant developments” in sustainability and transparency in the textile industry, one of the sectors most associated with child labour.

“Eradication of child labour is amongst the priorities of the new Commission,” Madeleine Tuininga, head of unit for trade and sustainable development at the European Commission’s Directorate-General for Trade, told the EURACTIV event in Brussels on Thursday (7 November).

It is also explicitly referred to in von der Leyen’s mission letter to Hogan, which urges him to “use trade tools to support sustainable development” and “monitor the implementation of climate, environmental and labour protections enshrined in our trade agreements, with a zero-tolerance approach to child labour.”

The College of Commissioners will also appoint a Chief Enforcement Officer to monitor and improve compliance with the trading bloc’s standards.

Mauro Scalia, a representative of the European textile industry’s lobby, explained that the regular meeting at the OECD Forum in Paris gathered only a few hundred participants a few years ago but now enjoys massive participation.

“We don’t even discuss if we need due diligence” but how to more effectively use the existing voluntary schemes online, which are financially enabled by DG TRADE, Scalia said. For the industry the main issue is traceability of materials and products. “Once we have traceability, transparency is there,” he explained.

“Recently there is more interest in having manufacturing countries, what we call ‘sourcing countries’, involved in this discussion, and I think Uzbekistan should think about that” looking at the Uzbek government representatives who participated in the event.

Uzbekistan is a case in point. From the Soviet era until very recently, all students from fifth grade to university, as well as social service, medical and education workers, were mobilised to harvest cotton on the country’s vast fields, explained Adkham Ikramov, Uzbekistan’s head of the Chamber of Trade and Industry.

However, the country has been trying to reform. Since 2013, about 1.25 million children stayed in schools instead of spending up to four months every year picking cotton.

“It is very much an approach we believe in,” said the Commission’s Tuininga. “You worked together with the ILO, the World Bank, UNICEF, all the institutions involved and of course with all the stakeholders in the country. Change is not done overnight, it really requires buy-in,” she said, encouraging Uzbekistan to share its experience with other countries.

“Especially now, when a lot of countries are going in the wrong direction, Uzbekistan is one of the very few that’s going in the right direction,” echoed Andrew Stroehlein, the Human Rights Watch’s European media director.

“The progress that we have seen on forced child labour is commendable,” Strohlein said but Ikramov later corrected him and underscored that there is no use of child labour, systematic or not, and Stroehlein agreed.

“If people don’t feel free to report forced labour, it will be very difficult to eradicate it,” said Stroehlein, encouraging additional opening of media freedom that has already commenced in recent years.

The Uzbek-German Forum, a Berlin-based NGO, estimated that up to 800,000 people were forced to pick cotton in November 2018, including public sector workers such as military personnel, firefighters, small entrepreneurs, bank employees, and factory workers.

Civil society has previously put pressure on Uzbekistan by encouraging the textile community to sign the Uzbek Cotton Pledge, a commitment not to knowingly source cotton from Uzbekistan as long as it is produced with forced labour.

Signatories consisted of manufacturing giants such as Levi’s, Gap, Zara, H&M, and IKEA. The campaign is widely perceived as having contributed significantly to the government’s swift actions in the area of child and labour rights.

The broad ban on cotton sourced from Uzbekistan is, however, also hurting ethical manufacturers who are attempting to sell to the European market and have ended up being collateral victims.

A young entrepreneur who attended the event invested heavily with private partners to buy modern equipment and pay higher than average wages but is currently unable to sell to Western brands because of the pledge.

When he tried to join the Better Cotton Initiative (BCI), the largest cotton sustainability programme in the world, he was told that Uzbekistan would first have to be on-boarded to the initiative as a country, a process that could take years.

Now fearing for his investment, the entrepreneur argues that his business could serve as a leader in Uzbekistan’s cotton industry if he was able to access the European market, showing to others in the country that concern for sustainability and ethical production is a win-win for workers and the business.