Chizhov, who has been Ambassador to the EU since 2005, spoke about the potential meet up during a briefing with reporters on Monday (17 June), on the occasion of the 30th anniversary of the relations between the then Soviet Union and the European Communities. Chizhov had previously sat down with Juncker on Friday to discuss “a wide range of issues”.

On 14 June Ambassador Vladimir Chizhov, Permanent Representative of Russia to the EU, was received by the President of the European Commission Jean-Claude Juncker. They discussed a wide range of issues of Russia-EU relations and international agenda. pic.twitter.com/Cjn8sLcj10

Possibly repeating some of his messages to the EU executive, Chizhov said the anniversary was a time to analyse the state of relations, including the “mistakes”. He called the relations “abnormal” and based on “invented pretexts” largely linked, in his words, to the non-implementation of the Minsk agreement by Ukraine’s former President Petro Poroshenko, for which he believes Russia was unfairly penalised.

The Russian diplomat also said that the EU’s new political cycle following the European elections could be “an impetus for improving Russia-EU relations”, adding that “a great number of member states” were in favour of continuing dialogue with Russia.

“We believe that neither side wants a sort of mechanical return to business as usual. What we need is a new paradigm of relations. And it’s not so important how to name that paradigm – whether it’s strategic partnership, or constructive cooperation, or privileged relationship, that’s secondary. What’s important is the substance”, Chizhov said.

He added that the substance should be “pragmatic” and could lead to Russia and the EU working together to “promoting the role of our common Eurasian civilisation” in an increasingly volatile world.

“We still believe that the concept of a common economic and humanitarian space from Lisbon to Vladivostok is a realistic concept and we are open to coming back to this work together to this work with our partners from the EU”, he said.

Asked about a Commission’s report on the European elections which said on Friday there was evidence Russian online sources had sought to promote extreme views and polarise debate on issues like migration and religion, Chizhov said the accusations weren’t backed up with hard evidence.

“The Commission itself actually outlined that it doesn’t possess any specific evidence pointing to Russian interference in the European elections, and I’m not surprised it doesn’t, because there was no such thing”, he said.

Asked about Russia-EU relations, he called them “bad”, and added that there was also tensions between the US and the EU, and the US and China.

“I wouldn’t invite you to compare the degree of tensions, but certainly our relations with the United States are bad”, he said, adding that unfortunately, this trend was continuing. He added however that Russia hoped for a meeting between Presidents Putin and Trump on the sidelines of the G20 summit in Osaka on 28-29 June.

“The list of bilateral meetings is a living organism”, Chizhov said, adding that Putin and Xi Jinping agreed to meet again in Osaka, after their met twice at two Central Asian summit last week. 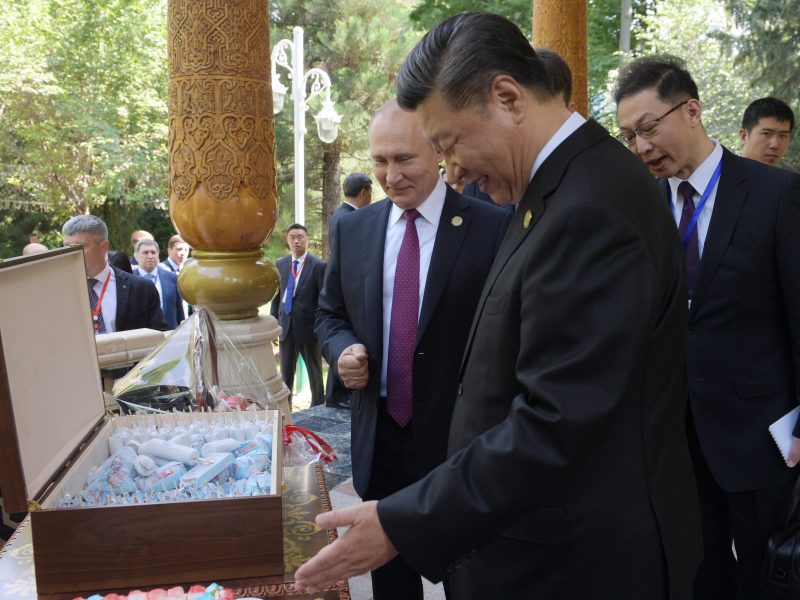 “Perhaps there will be meetings with people coming from Brussels. Jean-Claude Juncker might be interested”, he said.

Asked by EURACTIV if there was an agenda for such a meeting, he said any comment would be premature. “I hope it does happen”, he said.

EURACTIV also asked the Commission and was told that Juncker’s calendar for the week to come would be announced as usual on Friday.

Asked about a report by the New York Times on Saturday in which sources were cited as saying the United States had inserted potentially disruptive implants into Russia’s power grid, Chizhov called it “an interesting reading”, which in his words didn’t come as a surprise.

Asked about Iran and the current tensions after the attack on two tankers in the Gulf of Oman, he said that jumping to conclusions was “a soft spot in US policies”, recalling the then US State Secretary Colin Powell, who in 2003 dangled a model vial of anthrax in the United Nations to substantiate claims that Iraq had weapons of mass destruction.

“I welcome the EU position calling for caution”, Chizhov said, adding that in such situation, the legitimate question was “Quid prodest”: to whom does it profit?

EU foreign affairs chief Federica Mogherini had insisted earlier the same day on the need of de-escalation in the Gulf. She didn’t put any blame or express accusations.

Asked about Warsaw’s request for permanent deployment of additional NATO troops in Poland, Chizhov said that this would be a violation of the Russia-NATO founding act of 1997, according to which in his words no additional permanent stationing of substantial forces was authorised.