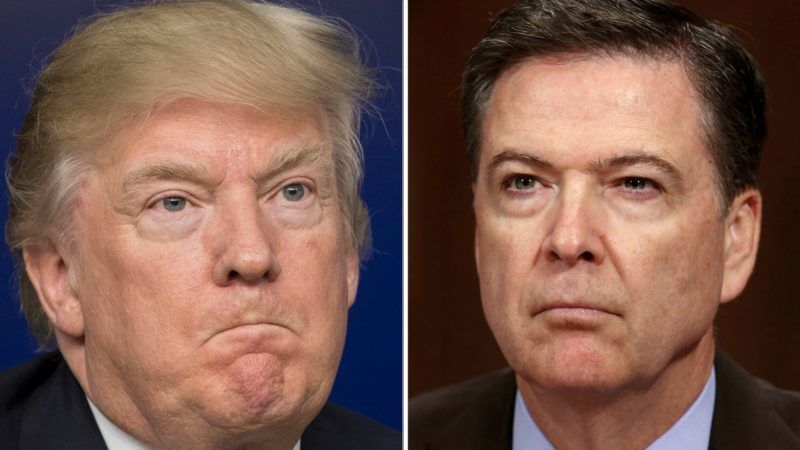 In the most eagerly anticipated US congressional hearing in years, Comey told lawmakers the Trump Administration had lied and defamed him and the Federal Bureau of Investigation after the president dismissed him on 9 May.

During more than two hours of testimony, Comey told the Senate Intelligence Committee he believed Trump had directed him in February to drop an FBI probe into the Republican president’s former national security adviser, Michael Flynn, as part of the broader Russia investigation.

Comey would not say whether he thought the president sought to obstruct justice, but added it would be up to special counsel Robert Mueller, who is now investigating the Russia allegations, “to sort that out”.

“I don’t think it’s for me to say whether the conversation I had with the president was an effort to obstruct. I took it as a very disturbing thing, very concerning,” Comey testified.

Sitting alone at a small table facing a bank of senators who fired question after question, Comey gave short, deliberative answers. He painted a picture of an overbearing president he did not trust and who pressured him to stop the FBI probe of Flynn.

Trump critics say any efforts by the president to hinder an FBI probe could amount to obstruction of justice. Such an offense potentially could lead to Trump being impeached, although his fellow Republicans who control Congress have shown little appetite for such a move.

In a speech to supporters across town, Trump vowed to fight on. “We’re under siege … but we will come out bigger and better and stronger than ever,” he said.

Comey did not make any major disclosures about any links between Trump or his associates and Russia, an issue that has dogged the president’s first months in office and distracted from his policy goals such as overhauling the US healthcare system and making tax cuts.

Russia has denied such interference. The White House has denied any collusion with Moscow.

Nevertheless, the Russia matter likely will continue to overshadow Trump’s presidency, especially as the FBI probe has ensnared not only Flynn but Trump’s son-in-law and adviser, Jared Kushner.

Attorney General Jeff Sessions has had to recuse himself from the investigation. Comey’s testimony drew renewed attention to Sessions and his relationship with Russia’s ambassador to the United States, Sergei Kislyak.

After Trump fired Comey, the administration gave differing reasons for his dismissal. Trump later contradicted his own staff and acknowledged on 11 May he fired Comey because of the Russia matter.

Asked why he thought Trump fired him, Comey said he did not know for sure. He added: “Again, I take the president’s words. I know I was fired because of something about the way I was conducting the Russia investigation was in some way putting pressure on him, in some way irritating him, and he decided to fire me because of that.”

Comey said repeatedly there were details he could not discuss in a public session, making clear he had sensitive information he could disclose only in a closed session with the senators.

Comey said the Trump Administration had defamed him in comments made after his firing by saying the FBI was in disarray and that the workforce had lost confidence in its leader. “Those were lies, plain and simple,” Comey said.

The White House fires back: "The President is not a liar." https://t.co/G5gqVyKLM5 pic.twitter.com/n5NzSNmrRn

His accusations could further mire Trump’s government in legal difficulties. Mueller and several congressional committees are investigating what US intelligence agencies have concluded was an deliberate effort by Russia to help Trump win the election.

“The Russian investigation is going to go on and it’s not going to stop and the president should have known that,” committee member Senator Dianne Feinstein (D-California) told MSNBC.

Trump’s personal lawyer, Marc Kasowitz, said Comey’s testimony proved the president was not under any investigation and there was no evidence a single vote was changed as a result of Russian interference in last year’s election. Kasowitz denied Trump ever told Comey he needed and expected his loyalty, as Comey said.

NBC News reported on Thursday that Kushner was expected to meet with staff members of the Senate Intelligence Committee in mid-June.

Comey said he felt he needed to get his account of his conversations with Trump in the public sphere in the hope it might prompt the appointment of a special counsel, which later occurred. Comey said he gave copies of his memo memorializing his talks with Trump to people outside the Justice Department and asked a friend to share its contents with a journalist.

Columbia Law School professor Daniel Richman confirmed to Reuters he was the friend to whom Comey was referring.

Columbia law professor Daniel Richman confirmed to me he was the Comey "close friend" who shared contents of memo with reporter.

Kasowitz said that “we will leave it to the appropriate authorities” to determine whether Comey’s leak “should be investigated”.

“Lordy, I hope there are tapes”

Comey said he did not know if there were tapes of his conversations with Trump, but that if so, they should be released.

“Lordy, I hope there are tapes,” Comey said.

Republicans on the committee questioned Comey intently but did not attack his integrity or try to treat him roughly, as a witness making accusations against a sitting Republican president might expect.

Comey testified he kept notes after meeting with Trump because “I was honestly concerned that he might lie about the nature of our meeting, and so I thought it really important to document.”

US stocks closed slightly higher as the market reacted little to Comey’s testimony, viewing his testimony alone as unlikely to mark the end of Trump’s presidency.

Comey said Trump did not attempt to get him to drop the overall Russia investigation, just the part of if that related to Flynn, whom the president fired in February for misleading Vice President Mike Pence about the extent of his conversations last year with Kislyak.

Republican Senator Marco Rubio asked Comey whether he perceived the president’s request to let the Flynn matter go as an order given Trump’s position as president, the setting and the circumstances surrounding the conversation.

Laura Donohue, a Georgetown University Law Center professor, said if Trump fired Comey to change the course of the Russia investigation, that would constitute an obstruction of justice.

“I helped prosecute Watergate. Comey’s statement is sufficient evidence for an obstruction of justice case.” https://t.co/Yva75kc1Bq

Both the conversation between Trump and Comey about Flynn and the firing itself were obstructive acts, she said. “He wanted to scuttle the investigation – it is hard to see it any other way,” she said.

Regarding Sessions, Comey said he did not discuss Trump’s pressure to drop the probe into Flynn with the attorney general because the FBI leadership team believed Sessions would later recuse himself from the Russia probe.

“We were also aware of facts that I can’t discuss in an open setting that would make his continued engagement in a Russia-related investigation problematic,” Comey said, without giving more details.

The Justice Department later issued a statement saying that Sessions recused himself from the Russia probe only because he had been part of Trump’s campaign.

Republican Senator Lindsey Graham said he did not believe Trump had committed a crime even if his personal style was often brash, adding: “I’ll just say it, if being crude, rude and a bull in a china shop was a crime, Trump would get the death penalty.”