The left-wing governments in Athens and in Skopje are optimistic about the resolution of an issue that has prevented the former Yugoslav Republic of Macedonia (FYROM) from entering the EU as well as NATO. [Shutterstock.com]

Maintaining good relations between neighbours, including a negotiated and mutually acceptable solution to the name issue, under the auspices of the UN, remains essential, the Commission official underscored.

“In this regard, we welcome the steps taken by the government to engage in discussions with their counterparts in Greece to strengthen good neighbourly relations and we hope this will translate into further concrete results,” the spokesperson added.

The left-wing governments in Athens and in Skopje are optimistic about the resolution of an issue that has prevented the former Yugoslav Republic of Macedonia (FYROM) from entering the EU as well as NATO.

“I am optimistic that we can effectively and responsibly handle an issue that the previous governments have bequeathed to us, and to the extent that there is a real desire from the other side to take steps […] but we still have to see them,” Greece’s Prime Minister Alexis Tsipras said.

Along the same line, FYROM’s Prime Minister Zoran Zaev said in a press conference last week in Thessaloniki that a solution is feasible, and that a date could be set to begin accession negotiations with the EU.

In 2012, Bulgaria joined Greece in vetoing the opening of EU accession talks with FYROM, despite a positive recommendation by the European Commission.

Several attempts have been made over the last years to find a solution to the issue, but both governments have failed to reach a compromise so far. But this time, analysts claim that there is positive political momentum since two left-wing governments are in power that have abandoned hard-line positions of the past.

In an interview with EURACTIV in September 2013, Radmila Šekerinska, a FYROM socialist former deputy prime minister responsible for European affairs, and the current minister of defence, said that the then conservative Prime Minister Nikola Gruevski (Vmro-Dpmne-EPP) used the name issue stalemate as an excuse “for some of our domestic so-called reformers not to deliver on any of the necessary changes to society”.

Asked about the “perfect name” for her, Šekerinska replied, “When I was little I was complaining that I dislike my name, but then I realised that having a rare name actually helps. So time is an element. As a citizen of this country – and I was raised in it under the name of Macedonia – I really do not understand the Greek position. But international politics just like domestic politics must sometimes solve a problem which seems irrational.”

Greece also considers Skopje to be misappropriating its ancient history. The airport in Skopje, for example, was named after Alexander the Great, who Greece sees as a hero of its ancient history. Athens was also disturbed by Gruevski’s Skopje 2014 project, when his government spent hundreds of millions of euros to build monuments depicting historical figures from the region of Macedonia.

But Social Democrat (SDSM) Zaev recently expressed his intention to break from that path.

“I give up (the claim) of Macedonia being the sole heir to Alexander. The history belongs not only to us but also to Greece and many other countries,” he said in December.

According to David L. Phillips, the director of the program on peace-building and rights at Columbia University’s Institute for the Study of Human Rights, a solution on the name dispute would be beneficial for many actors.

“Tsipras would garner prestige and respect as a strong leader,” he said in an op-ed published in Kathimerini newspaper.

“Resolving issues with Macedonia would strengthen Greece’s sovereignty at a time when Turkey is demanding to upgrade the Lausanne Treaty, which created the boundaries of modern Greece and making designs on Greek territory in Western Thrace,” he added.

Regarding FYROM, Philips noted that a solution would open the door to Euro-Atlantic institutions, which will consolidate their democracy, free-market reforms, and fight against corruption.

According to Phillips, who worked as a senior adviser to the State Department during the Clinton, Bush and Obama administrations, the US wants to deepen cooperation with both countries to stem the tide of radicalisation and extremism in the Western Balkans.

“Washington wants to expand its military presence in Greece and set up new bases in the country. Improved cooperation can also help manage the possibility of another refugee and migrant crisis,” he said, adding that the EU, while dealing with Brexit, needs to show it is still viable as a proponent of peace in south-eastern Europe and beyond.

In the meantime, the issue has sparked intense discussion in Athens between the government and the right-wing opposition party New Democracy.

Greece pushes for a compound name before the word “Macedonia”, which will be used in relation to everyone (erga omnes). 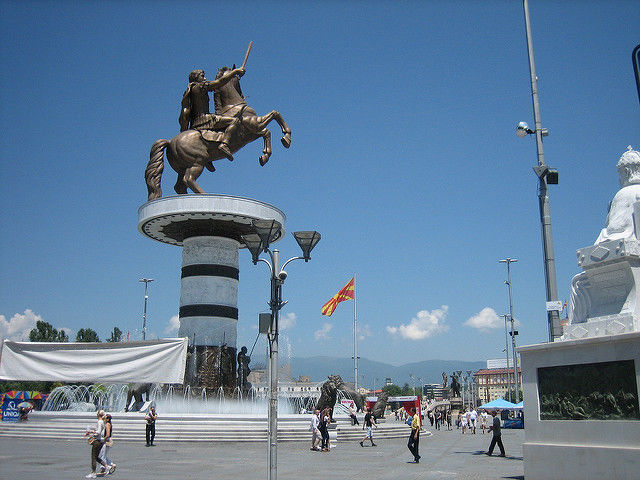 At that summit, the then right-wing Prime Minister Kostas Karamanlis (New Democracy-EPP) blocked the country’s bid to join NATO under its provisional name of FYROM.

“We are in favor of an understanding with all the parties and political forces of the country, with every personality and every citizen who is interested and who wants solutions to the issues that have dealt with the country, in order to open up a better future, without problems of the past oppressing the policies of our country,” he said.

But New Democracy blames the government for not having a common position on the issue.

Particularly, Panos Kammenos, the leader of the center-right junior coalition partner Independent Greeks and former New Democracy member, implied that he would not accept any solution containing the Greek term “Macedonia”.

He added, though, that he fully trusted the foreign affairs minister to handle the matter.

On the other hand, the conservative opposition threatened with a motion of no confidence in the event of a non-common position between the government partners.

Dora Bakoyanni, a former minister of foreign affairs and the sister of New Democracy’s current leader Kyriakos Mitsotakis, stressed that unless there was a common position of the government majority, her party would not support the Greek proposal, even if it agrees with it.

However, the opposition later toned down its rhetoric and argued that the government should be more responsible.

The Independent Greeks said that New Democracy was trying to destabilise the government in order to hide its internal divisions on the issue. Kammenos noted that Bakoyanni undermined Karamanlis at the 2008 NATO summit in Romania.