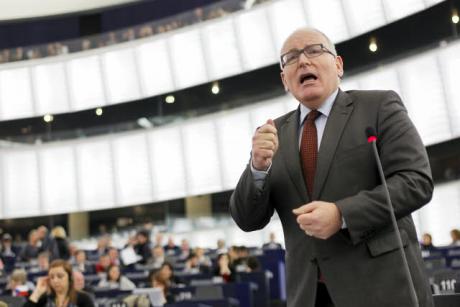 “Every border agent must know when an entry involves a foreign fighter,” German Internal Affairs Minister Thomas de Maizière said on Tuesday (24 February), after a meeting with the first Vice President of the European Commission, Frans Timmermans, in Berlin.

De Maizière made it clear he hopes to employ all available means to stop foreign fighters from coming to Europe.

The European Commission supports de Maizière’s plan to combat terrorism and hopes to reform the guidelines of the Schengen Borders Code for border officials.

In “six to eight weeks” the Brussels agency expects to present plans for reform, which are ultimately meant to strengthen the EU’s external borders, Timmermans commented.

Up till now, EU citizens simply had to identify themselves at Europe’s external borders. Further-reaching controls are only allowed under concrete suspicion and on a random basis. These regulations are specified in the Schengen Borders Code.

According to “informal recommendations” from the European Commission from December, data from all passengers in planes from “geographical areas in the vicinity of conflict zones” could be checked against investigation databases in the future.

The German government welcomed the European Commission recommendation, in a response to a minor inquiry from the Left Party (Die Linke) in the Bundestag, Germany’s lower house. The government did not wish to comment on whether or not such systematic checks already take place.

According to Left Party representative Andrej Hunko, the question is regarding flights to and from Istanbul, whose passengers are subjected to particular scrutiny – especially among men of a certain age.

The European Commission hopes to precisely define such risk destinations in the new guidelines. Hunko considers the move a clear breach of the Schengen Borders Code.

“Comprehensive checks are just as prohibited as checks at certain times. An assessment I ordered from the Research Service confirmed this. The European Court of Justice has also not decided on the exact interpretation of systematic checks,” Hunko indicated.

He also sees the issue of foreign fighters as an undeniable threat, “but that does not permit stretching existing laws or even breaking them,” Hunko said.

As a result, the only legal path would be to completely reform the Schengen Borders Code, which would require the approval of the European Parliament. But in de Maizière’s opinion, there is not enough time for such a procedure. “The citizens are calling on us to make quick progress in the fight against terrorism,” Timmermans added.

Timmermans: no time for data retention

At their meeting in Berlin, de Maizière and Timmermans also spoke about the schedule for the planned EU PNR data set. They said it was their hope to conclude a corresponding directive within this year.

So far, the European Parliament has strictly rejected a PNR agreement, but on Thursday (26 February) the members of the Internal Affairs Committee hope to vote on a compromise that would allow retention of flight passenger data for up to five years – though only under observation of a section on data protection. This was also taken from the draft resolution, acquired by EURACTIV Germany.

In light of the planned anti-terror measures, the European Commission does not see itself as being in a rush to sort out the controversial PNR data retention guidelines. In 2014, the European Court of Justice (ECJ) overturned a regulation to this effect in the EU.

For years, there has been no law on this in Germany. The German Constitutional Court threw out the German requirements in 2010.

Next, an assessment is needed to see whether there is a possibility to achieve advances in this, “and we will very carefully do this”, Timmermans said. “Only after it is clear that advances are possible here, will we go forward.”

Much work needs to be done in the near term, regarding the PNR agreement, but also EU data protection reforms, he emphasised. “I want to focus my energy on that”.

The European Union has pledged closer cooperation in the fight against terrorism following the killings at Charlie Hebdo and subsequent attacks in Paris, in which 17 people were killed.