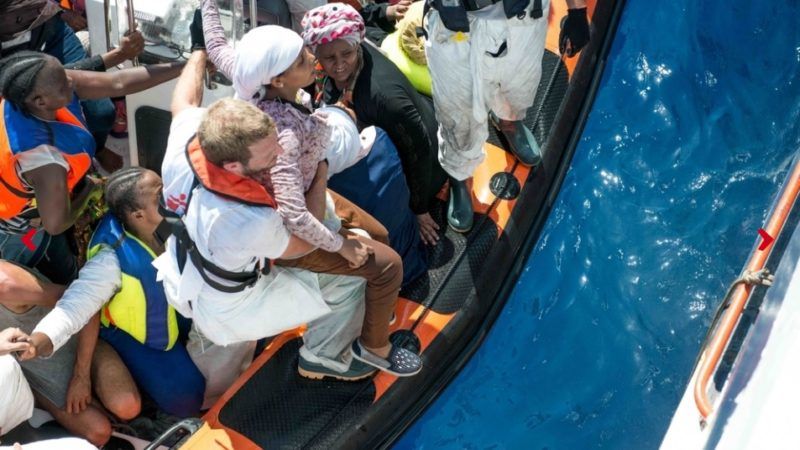 A rescue operation by Medecins Sans Frontières in the Mediterranean. [Gabriele Francois Casini/MSF]

The EU is pressing on with controversial plans to tackle the migration crisis in the face of mounting criticism from NGOs and UN experts. EURACTIV France reports.

After protests from several NGOs, two experts from the UN’s Human Rights Council (UNHRC) on Thursday (August) added their voices to criticism of the EU’s management of the refugee crisis.

In July, the interior ministers of Italy, France and Germany discussed imposing a new code of conduct on NGOs. This is currently being drawn up by Italy.

To cut the number of migrants it is forced to deal with, the EU plans to ban NGOs from using certain types of boat and from picking up migrants close to the Libyan coast. Ministers have also discussed obliging boats to use ports in countries other than Italy.

For the NGOs themselves this is a potentially dangerous solution, as their often overcrowded boats cannot safely cover large distances.

On Tuesday (15 August), the Libyan coast guard detained members of a Spanish NGO, halting life-saving operations by several organisations in the Mediterranean. The EU is proud to train Libya’s coast guard, but according to NGO Médecins Sans Frontières, whose boat Aquarius plays an active part in rescue operations, migrants are in just as much danger in the hands of the coast guard as they are in the water.

Five aid groups that operate migrant rescue ships in the Mediterranean refused to sign up to the Italian government’s code of conduct on Monday (31 July), the Interior Ministry said, but three others backed the new rules.

Turning a deaf ear to criticism

The action plan placed on the table by the Commission in early July foresees a number of measures designed to relieve the burden of migrant arrivals on Italy. But some EU countries have flatly refused any part in the EU executive’s migrant relocation scheme.

The idea of moving the EU border to Libyan soil has also met with severe criticism from the UN experts, who insist that Libya cannot be considered a safe location due to the treatment migrants can expect if they are detained by local law enforcement and the severe risk to their human rights if they are not.

“The solution is not to restrict access to international waters or firing weapons to threaten boats, as Libya has reportedly done repeatedly. This will result in more deaths of migrants at sea and is in contravention of the obligation to rescue people in distress,” the experts said.

Questioned on the issue by EURACTIV, the Commission swept aside these concerns as coming from “independent experts and not necessarily reflecting the view of the UNHRC”.

Like the EU member states themselves, the Commission is partially responsible for funding the UN agency; a fact that may prevent it from taking a stronger stance on the subject.

The EU executive also confirmed that the action plan announced in July is progressing, in spite of these criticisms. Commission President Jean-Claude Juncker recently assured Italy’s leaders that the EU would accelerate the relocation of migrants and mobilise extra funds and personnel for return operations.

It seems the criticisms from the UN experts and NGOs have had little impact in Brussels, other than perhaps on the discourse. “We are working together on one priority, which is to reduce the number of deaths at sea,” the Commission said.