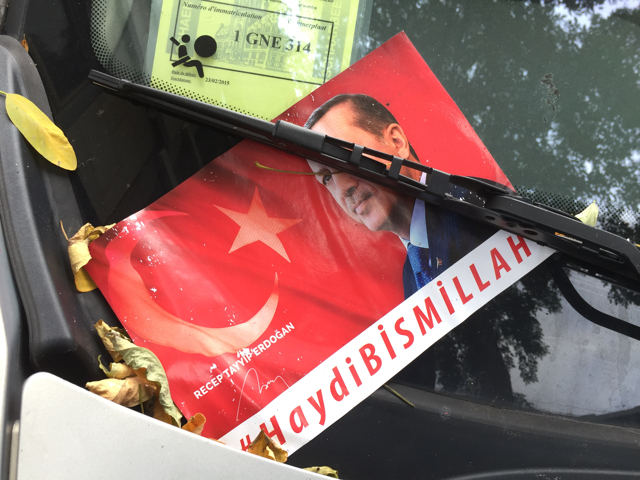 Concerned with keeping Turkey on board to help the EU manage the migrant crisis, the European Commission declined on Tuesday (27 October) to comment on a crackdown on media by Ankara.

On Monday (26 October), an Ankara court appointed a board of trustees to manage the Koza-Ipek Group, effectively seizing its 21 companies, including its media operations, as part of a crackdown on followers of Fethullah Gülen, who is accused of plotting to overthrow the government.

The move, which comes shortly before Sunday’s election (1 November) has raised US concern and triggered demonstrations in both Ankara and Istanbul.

A fight broke out when the trustees tried to enter the group’s headquarters in Ankara, prompting police to fire tear gas at demonstrators outside the compound, the state-run Anatolia news agency said.

“We will not be silenced,” the crowds shouted.

Koza-Ipek has a wide range of businesses, including media, energy and construction.

Its CEO, Akin Ipek, denounced the move as “politically motivated”, saying the government had failed to find any illegal activity during inspections of the company.

A matter of concern for the US

“When there is a reduction in the range of viewpoints available to citizens, especially before an election, it is a matter of concern,” the US embassy in Ankara said in a tweet.

Asked if the executive had something to say, Commission spokesperson Alexander Winterstein said the executive “won’t comment on this internal development”.

Asked by EURACTIV when the Commission plans to publish the regular monitoring report on Turkey, which is usually highly critical and should have been published by now, Winterstein said he had no news to communicate.

“The President [Jean-Claude Juncker] will determine the appropriate moment to publish the enlargement reports,” he said.

Media rights groups have expressed concern over a further decline in press freedoms since Erdo?an became president in August 2014, after more than a decade as premier.

International journalists have been arrested and deported, while about 20 have been detained on a variety of charges.

One of Turkey’s best known anti-government journalists was also attacked this month, and a “terror propaganda” probe opened into his paper.

Do?an said that among the trustees appointed to manage the group’s media companies were former executives of the pro-government Turkuvaz Media Group, and Kanal 7 television.

Turkish authorities have ramped up their campaign against Pennsylvania-based Gülen in recent months.

In September, police raided Koza-Ipek’s media companies, briefly detaining six people, including its CEO as part of a “terrorism probe” into the 74-year-old cleric.

Erdo?an accuses Gülen of trying to topple him by persuading allies in Turkey’s police and judiciary to launch a vast probe into government corruption in December 2013, which led to the resignation of four ministers.

The Turkish government responded by purging both the police force and judiciary of pro-Gülen elements, and arresting news editors and businessmen.

A Turkish court last week approved an indictment accusing Gülen, for trying to bring down Erdo?an, charging him with “running a terrorist group” which launched the corruption probe into the president’s inner circle.

Gülen is set to be tried in absentia on 6 January.

The cleric, who left for the United States in 1999 to escape charges of anti-secular activities by the government at the time, denies the latest allegations.

Daniel Höltgen, spokesperson to the Secretary General of the Council of Europe Thorbjørn Jagland, stated: "Raiding media outlets and taking over their assets just days before an election raises questions about media freedom. We are following these developments in Turkey closely and with concern".

On the next day after this article was publisher, Catherine Ray, spokesperson to EU's foreign policy chief Federica Mogherini, stated:

"The EU is concerned about the latest developments in Turkey concerning Koza ?pek Holding, which are worrying. The Commission continues to follow the developments closely and reiterates the importance of respect of rule of law and media freedom.

Turkey as any country negotiating EU membership needs to ensure the respect of human rights, including freedom of expression, in line with the European Convention on Human Rights (ECHR).  The EU will continue raising the issue of the freedom of expression with the Turkish authorities as a matter of priority."

The Committee to Protect Journalists (CPJ) condemns this week's raids on several pro-opposition media outlets belonging to the Koza ?pek Group. The news broadcasts, which had provided political debate and opposition views in the run-up to November 1 parliamentary elections, have been replaced with documentaries on World War II and the lives of camels, reports said.

"By replacing news broadcasts with camel films days before a parliamentary election, Turkey's leaders have shown they no longer are interested in even pretending to respect the country's democracy," CPJ Europe and Central Asia Program Coordinator Nina Ognianova said. "We call on the Turkish government to immediately return Bugün TV, Kanaltürk TV, and the other Koza ?pek media outlets to their rightful management."