“The protests in Belarus is not about geopolitics, it’s a national crisis”, Council President Charles Michel said following the summit.

“Demonstrations in Belarus are not against any neighbouring country or entity”, Commission President Ursula von de Leyen echoed.

The EU said it does not recognise the results of the Belarus elections and would shortly impose targeted sanctions on those who were involved in electoral fraud and repression of the protests that followed.

The sanctions, which will be decided at a later stage, also are expected to be minimal, and to target the individuals responsible for police violence, falsification of elections results and abuse.

“We stand firmly behind the right of Belarusian people to determine their own fate, and the EU will impose shortly sanctions on a substantial number of individuals responsible for violence, repression and election fraud,” Michel said after the talks.

A legal process was started by EU foreign ministers on Friday (14 August) to draw up a list of targets in Belarus for a new round of sanctions in response to strongman Lukashenko’s post-election crackdown.

Michel said EU leaders stressed their concern about the validity of the election results and made clear that they intend to increase pressure on those linked to the violent crackdown of protests.

The financial package in support of the people of Belarus is also minimal. Of a total of €53 million, only €1 million will support civil society and independent media while another €2 million will be dedicated to directly support those impacted by violence, and the remaining €50 million for COVID-19 aid.

Apparently, a majority of EU countries resisted the push by Belarus’s neighbours Poland and Lithuania to adopt heavy decisions and harsh sanctions. For example, EU leaders didn’t call for a re-run of the 9 August elections and didn’t “outlaw” Lukashenko by recognising his challenger Svetlana Tikhanovskaya as the winner .

While leaders met virtually, authorities in Belarus resumed the detention of protesters who continued to take to the streets to demand the resignation of Lukashenko. 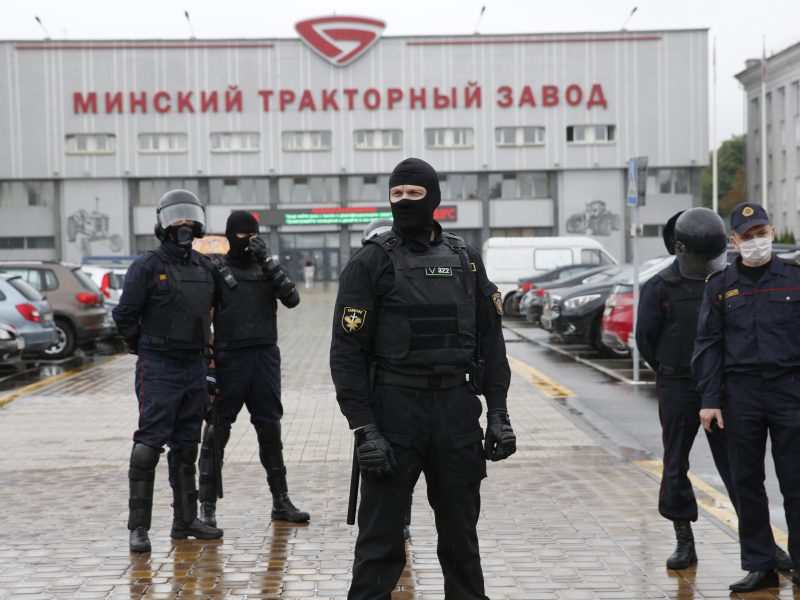 “The people of Belarus want change and they want it now,” Von der Leyen said alongside Michel. “They want democracy and new presidential elections as these elections were neither fair nor free.”

However, while EU leaders firmly backed Belarus protesters and civil society, they are treading a fine diplomatic line, trying to support democratic forces in Belarus without provoking Moscow.

Almost seven years after the “Euromaidan” in Ukraine which led to a major crisis with Russia and the subsequent annexation of Crimea and occupation of Donbas by pro-Russian separatists, the EU appears to be extra careful with Belarus, a former Soviet Republic which Moscow regards as its natural buffer.

“Belarus is not Europe,” EU Industry Commissioner Thierry Breton said earlier, comparing it to pro-Western Ukraine and Georgia, both targets of Russian military operations. “Belarus is really strongly connected with Russia and the majority of the population is favourable to close links with Russia.”

Strictly speaking, the entire territory of Belarus is in Europe.

Speaking after the meeting, German Chancellor Angela Merkel told reporters there should be no outside interference in solving the crisis in Belarus.

At most, the Organisation for Security and Cooperation in Europe (OSCE) could play a role in an intra-Belorussian dialogue.

Intervention by Russia would complicate the situation, Merkel said.

At the eve of the summit, Michel, as well as both the French and German leaders, had  on Tuesday consulted by phone with Russia’s president Vladimir Putin on the situation and to stress the right of the Belarus people to determine their own future.

They had also discussed ways to encourage talks between Lukashenko and the opposition, possibly by supporting a dialogue process fostered by OSCE.

Asked about the call, Putin said that “the future of Belarus has to be decided by the people in Belarus – not in Brussels, not in Moscow”.

Russia has reacted in an uncharacteristically measured manner as the events in Belarus have unfolded.

Ahead of the meeting, there had been calls for action from several EU members, especially Belarus’ neighbours Poland and Lithuania, the latter now hosting exiled opposition candidate Svetlana Tikhanovskaya.

Poland, Latvia and Lithuania have volunteered to act as mediators to try to resolve the post-election crisis, but it now appears they will not be given such a role.

Lithuania has urged Western governments not to recognise the results of the elections and warned that Belarus was preparing military drills on its border with Europe.

The presidents of the Visegrad Group including the Czech Republic, Hungary, Poland and Slovakia called on Belarus on Wednesday to avoid violence against protesters and open the way for a political solution to the crisis.

“(We) call on the authorities of the Republic of Belarus to open the way for the political solution, and to abide by the fundamental human rights and freedoms while refraining from the use of violence against the peaceful demonstrators,” the presidents said in a joint statement.

“We…support the right of the people of Belarus to free, fair and democratic presidential elections,” it said.

Poland’s Prime Minister Mateusz Morawiecki told reporters after the meeting, that EU leaders “all believe that the elections in Belarus should be held again”.

However, this contradicts von der Leyen, who, when asked if the EU would call for a re-run of the Belarus elections, said it would be up to the people of Belarus to decide.

One response to “Crisis in Belarus not geopolitical, EU leaders say after 3-hour summit”