Trump is widely seen in the EU as a loudmouth who wouldn't follow through with his extreme rhetoric, while Clinton will provide continuity. A new study says both assumptions are wide of the mark. [Shutterstock]

European leaders are not prepared for or not aware of the changes that will come with President Barack Obama’s successor as commander-in-chief, concluded an ECFR study. Government officials across the EU28 were surveyed about how ready Europe is to deal with the impact of a new US administration after eight years of Obama.

While Trump is perceived as a potential existential threat to the EU’s transatlantic relationship, his posturing on NATO and free trade have been viewed largely as simple rhetoric and promises that he will be unable or willing to follow through on, if he is elected. ECFR insisted that Trump’s views on relations with Europe are not just the whims of a long and ugly election, but are actually long-held convictions.

The ECFR highlighted that the power of the US presidency and the structure of its political system mean that the wish of the incumbent president is “never far from policy”.

The picture that emerges from the study suggests that European governments have a faith in the American system that would ultimately prevent Trump from implementing the policies he has supported over the last 12 months. It is in stark contrast to his domestic opponents and critics, who consider the possibility of a Trump presidency as being more “apocalyptic”.

But thinking Clinton will provide continuity is also a dangerous game, according to the study, as the former secretary of state will be subject to the same political forces as Trump; it looks likely that military support for Europe will be scaled back.

It’s a scenario that looks ever more likely, after Trump’s campaign was seemingly torpedoed by comments he made in 2005 about groping women. New polls indicate that Clinton has opened up a sizeable lead over ‘The Donald’.

“Individual European governments simply don’t have the kind of leverage with the United States that they think do. They have only managed effective leverage when they work together,” said the study’s co-author, Jeremy Shapiro.

In reality though, 15 member states said they would prefer to work with the US bilaterally, while only four said they would rather do business through the framework of NATO.

When it comes to trade, the report warned that EU leaders mistakenly think they are doing the US “a favour” by brokering TTIP. But the unpopularity of the deal among the American electorate means that whichever candidate wins, Europe should not expect any major concessions at the negotiating table any time soon.

Previously, the EU was keen to get the agreement finalised before President Obama left the Oval Office, but this is generally accepted to be an unrealistic prospect now. EU Commissioner for Agriculture Phil Hogan said last week that he does not expect a final deal before 2018.

As the UK heads towards the door, the job of America’s “Trojan Horse”, as Charles De Gaulle put it, is perceived to be up for grabs. France, Germany, Spain or even Portugal all think that Brexit is a golden opportunity for them to establish themselves as the middleman between the States and the EU.

The study’s results showed overwhelmingly that the EU supports Clinton in her bid to become the first female president; only Hungary is in favour of her controversial opponent. The ECFR highlighted that this is because migration currently dominates the political landscape in the central European country, meaning Trump’s controversial build-a-wall and ban-all-Muslims policies strike a chord with Viktor Orbán’s government. 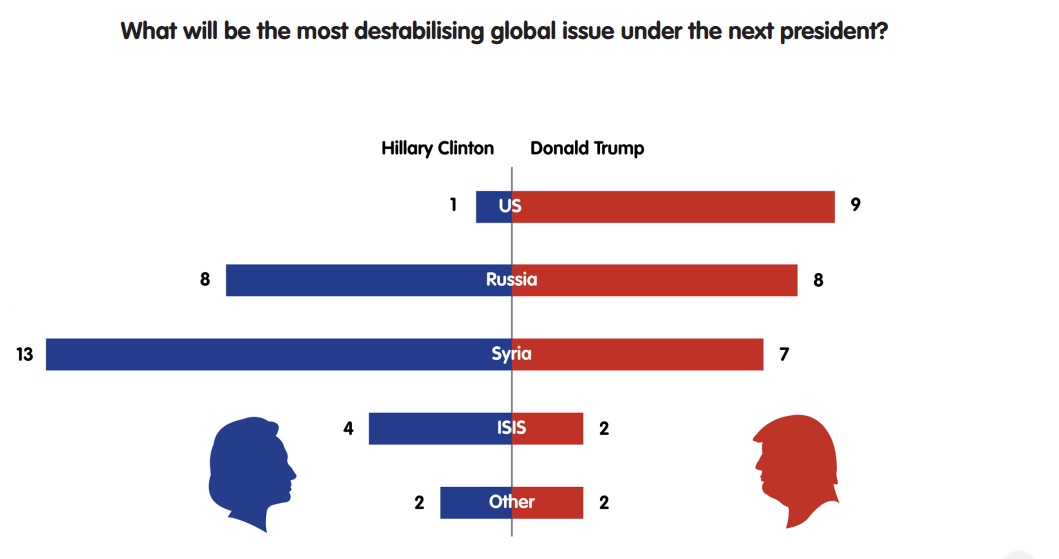 Clinton and Trump face off in one final presidential debate on Wednesday (19 October). American troops stationed overseas and US citizens living abroad have already started voting, ahead of the actual election on 8 November.

One response to “‘Dangerously complacent’ Europe unready for Trump or Clinton”