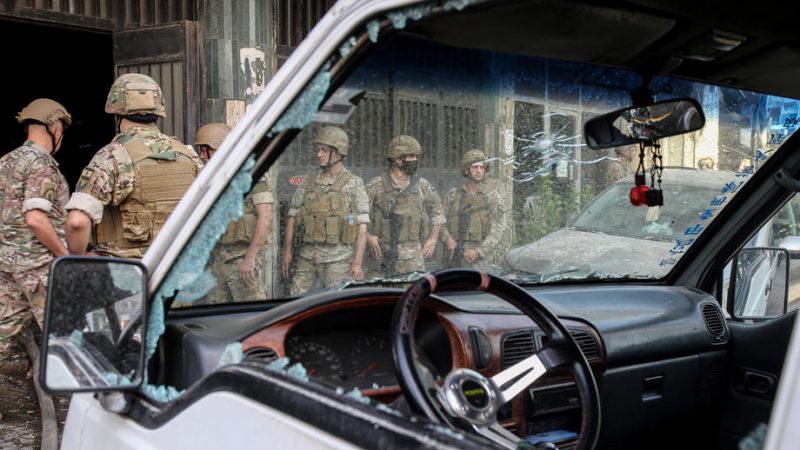 Lebanese military forces are seen through the smashed glass of a vehicle after they were deployed in the area of clashes in the Tayouneh neighborhood, southern suburb of Beirut, Lebanon, 14 October 2021. At least six people were killed and 20 wounded at a Beirut rally organized by Hezbollah and Amal movements to demand the dismissal of the Beirut blast lead investigator. [EPA-EFE/NABIL MOUNZER]

At least two people were killed in Beirut on Thursday (14 October) when heavy gunfire targeted supporters of the Lebanese Shi’ite group Hezbollah, as they headed to a protest demanding the removal of the judge investigating last year’s explosion at the city’s port.

The shooting on a frontline of the 1975-90 civil war marks some of Lebanon’s worst civil strife in years, and highlights a deepening political crisis over the probe into the catastrophic 4 August 2020 blast.

At least six people have been killed after gunfire broke out in Beirut during a protest over the inquiry into last year's port blast.

The explosion killed more than 200 people and devastated swathes of Beirut. 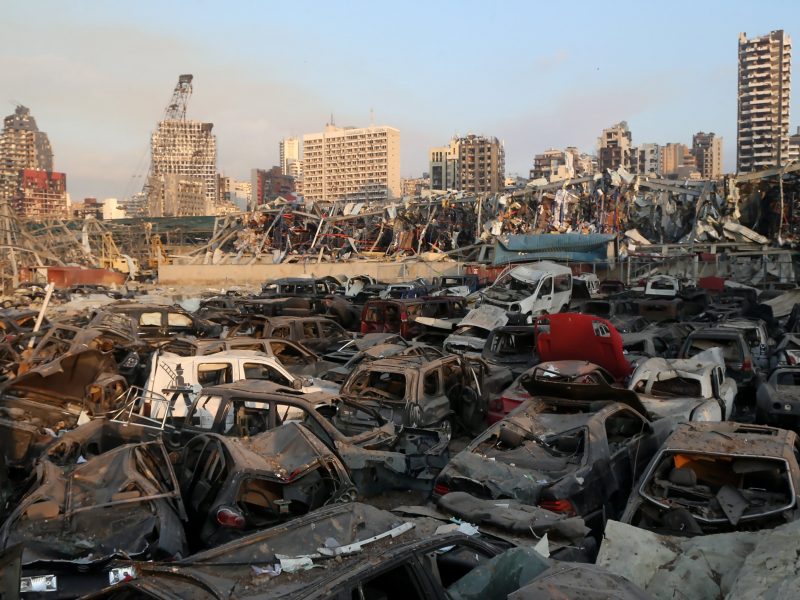 The Lebanese army said in a statement the gunfire had targeted protesters as they passed through a traffic circle located in an area dividing Christian and Shi’ite Muslim neighbourhoods.

The shooting began from the Christian neighborhood of Ain el-Remmaneh before spiralling into an exchange of fire, the source added.

Hezbollah’s al-Manar TV said “two martyrs” and a number of wounded had been taken to a hospital in the Shi’ite southern suburbs, indicating that the casualties were Shi’ites.

Bursts of gunfire were heard for several hours, along with several explosions which appeared to be rocket propelled-grenades fired into the air, Reuters witnesses said.

Unidentified snipers are taking out Hezbollah militants in Beirut who are threatening to tear the country apart over a court ruling in the Beirut explosion that happened last year. pic.twitter.com/usrx7ByRGm

The Lebanese army deployed heavily in the area and said it would open fire against any armed person on the road.

Political tensions over the probe into the port explosion have been building, with the heavily armed, Iran-backed Hezbollah leading calls for Bitar’s removal, accusing him of bias.

The standoff over Bitar’s investigation is diverting the newly formed government’s attention away from tackling one of the worst economic meltdowns in history.

The judge has sought to question a number of senior politicians and security officials, including Hezbollah allies, suspected of negligence that led to the port explosion, which caused by a huge quantity of ammonium nitrate.

All have denied wrongdoing.

Though none of its members have been targeted by the probe, the heavily armed, Iran-backed Hezbollah has accused Bitar of conducting a politicised probe only focused on certain people.

These include some of its closest allies, among them senior figures in the Shi’ite Amal Movement who occupied ministerial posts.

A court earlier on Thursday dismissed a legal complaint against the Bitar, documents showed – allowing him to resume his investigation.

On Wednesday, Samir Geagea, a Christian opponent of Hezbollah, rejected what he described as any submission to “intimidation” by the group, calling on Lebanese to be ready for peaceful strike action if the “other side” tried to impose its will by force.

Commission Spokesperson Peter Stano said on Thursday what was happening in the Beirut streets was “the last thing people need” and called for restrain.

“Political leaders in Lebanon have the duty and the responsibility for what is going on’, he said, adding that they also have the duty for the investigations on the Beirut blast to proceed.

“The investigation is dragging on for more than one year, the Lebanese people expect legitimate answers”, he said.

“The EU is watching very closely what is going on in Lebanon and who behaves how”, he said, adding that if needed, sanctions would be discussed, notably at ministerial level on Monday in Luxembourg.

“This could be the end of Lebanon as an independent state.”

One analyst gives his view on the gun battles that broke out in Beirut on Thursday.