Russia welcomed the world to the soccer World Cup on Thursday as fans streamed in, the hosts savored a 5-0 victory on the pitch and President Vladimir Putin’s government derided Western efforts to isolate him.

The Kremlin leader, greeted by a huge cheer ahead of the hosts’ opening game against Saudi Arabia, spoke of showing the world a hospitable Russia and of sport overcoming differences.

Russia is grappling with Western sanctions imposed after its seizure of Crimea from Ukraine four years ago, but a crushing win in the first of 64 matches of a month-long festival was all many Russians were thinking about.

Talking of a love of soccer uniting the planet “as one team”, Putin said: “In this unity, over which no powers reign, in which there are no differences of language, of ideology or of faith, lies the great power of football, and of all sport.”

Western powers chose not to send senior representatives to the opening ceremony but, despite some muttering this year as relations soured further, there are no sporting boycotts like the one that marred the 1980 Moscow Olympics, or doping bans of the kind that excluded many Russians from the last two Olympics. 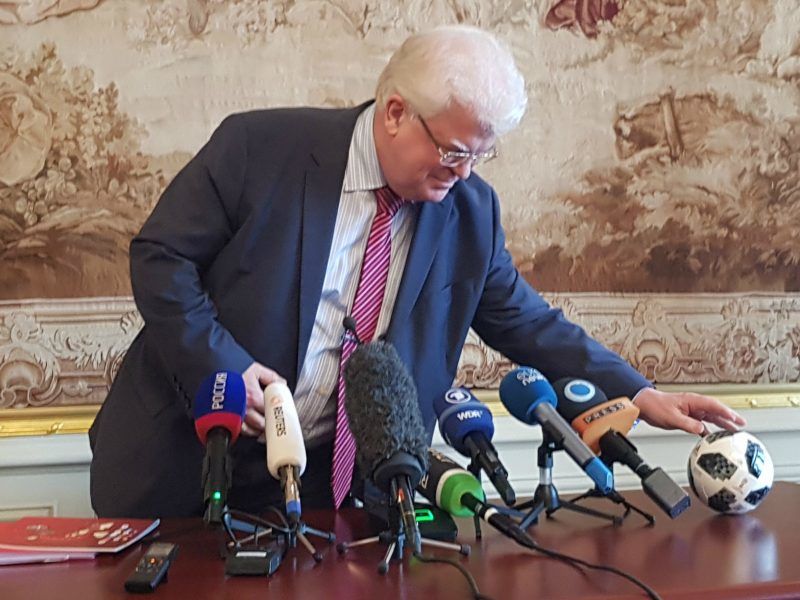 Russia’s ambassador to the EU, Vladimir Chizhov, met with journalists in Brussels on Tuesday (5 June) to promote this summer’s FIFA World Cup in Russia, using the opportunity to deliver a number of messages to the EU and its leaders.

“Attempts at a boycott were doomed from the start,” Deputy Prime Minister Vitaly Mutko, a close Putin ally and long-time sports minister – himself banned from the Olympics – told Izvestiya newspaper. “It shows how foreign politicians are sometimes cut off from real life.”

The president, newly re-elected after 18 years in power, heard British singer Robbie Williams dominate a colorful half-hour opening ceremony at Moscow’s Luzhniki Stadium with what the Kremlin listed as an array of 15 foreign leaders — though that included eight from ex-Soviet neighbors as well as two from Russian-backed breakaway regions of Georgia.

Putin watched the game with Crown Prince Mohammed bin Salman, stretching across FIFA President Gianni Infantino to offer a consoling handshake to his Saudi guest as Yury Gazinsky put Russia a goal up after 12 minutes. The comfortable win raised hopes that the low-ranked hosts might progress into the tournament’s later stages.

“Russia in Centre Field,” headlined the state-run newspaper Rossiiskaya Gazeta. “The main victory is already won,” it said, praising an organizational effort in which a dozen stadiums have been built or rebuilt and a huge security operation rolled out.

The biggest event Russia has hosted since Soviet times, when the United States and others boycotted the 1980 Moscow Olympics over the invasion of Afghanistan, puts a spotlight on how Russia has, since the chaotic collapse of Communism, resurrected its economy and a tight social order under former KGB agent Putin.

Western leaders are staying away, though some are likely to attend later matches if their teams progress, and protests and criticism — of conflict with Ukraine or human rights abuses in Russia — have been largely confined to foreign soil.

My Moscow protest was in solidarity with heroic Russian & Chechen LGBT people. I salute & support their struggle. The human rights abusing Putin regime must not be allowed to score a PR coup with the World Cup. There can be no normal sporting relations with an abnormal regime. pic.twitter.com/Y58ZyY0XXr

Governments have warned their citizens to beware of violent Russian soccer hooligans as well of a risk of racial and homophobic harassment in the streets.

A senior Russian lawmaker has called on her countrywomen not to have sex with foreign men visiting the country during the World Cup, saying Russian women "should give birth to our own" https://t.co/lzVQps2zmS

“All countries accuse each other of racism, homophobia. This has nothing to do with the World Cup,” he told reporters. “As for the women of Russia, they can handle anything themselves.”

With some 200,000 visiting fans on hand to follow the 32 teams, Putin has urged Russians to put on a show and get behind the home team — whose poor recent form had made them the tournament’s weakest side by FIFA world ranking.

There was good-natured sharing at the ground before the match among fans from around the world in sombreros, fur hats, national strips or national flags, with little of the heavily armed security and troops seen at similar events in western Europe since Islamic State attacks.

“We’re feeling amazing emotions,” he said. “There’s a sea of people … We think foreigners’ impressions will be great.”

Vitaly Mokhov, 36, came from Vologda in southern Russia with his father to celebrate his 70th birthday.

“It’s a festival,” he said. “We’ve never seen anything like it in the history of Russia, and we’ll never see it again in the rest of our lives.”