By Alice Taylor | Exit.al with EURACTIV.com 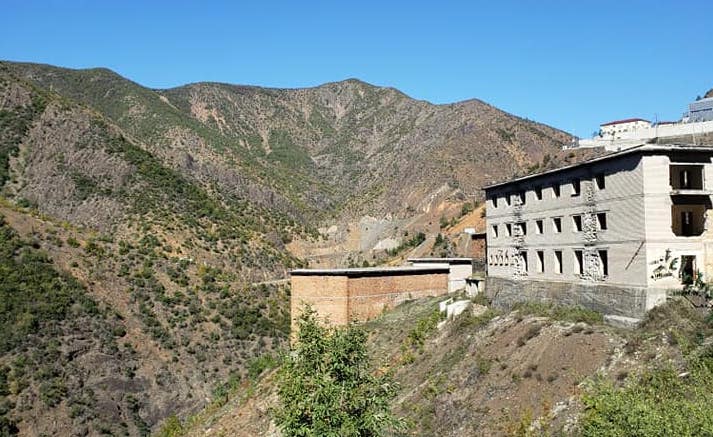 Spac prison in Albania, a place where thousands of Albanians were imprisoned and tortured during thee 50-year communist regime. Alice Taylor, Tirana

Nazmi Uruci’s descendants have been searching for his remains for almost 80 years. Born in northern Albania in 1904, Nazmi was a customs official during the short reign of Albania’s first and last reigning monarch, King Zog.

After the monarchy fell, and the communists were set to take power in the country, an order was sent to “deal with” those working for the previous regime.

Uruci and two friends were rounded up and executed in October 1944 without trial. His remains are still nowhere to be found and the state has refused to acknowledge his murder or help locate his grave.

“All losses of life are painful, but without a grave, without justice, without motive, at just 40 years old …we need to regain our dignity,” Hysen Daci, the victim’s nephew, told Exit, EURACTIV’s Albanian partner.

Uruci’s case is far from unique. Many more went missing during the regime of Enver Hoxha after World War II. More than 6,000 people are still unaccounted for.

Albania was ruled by a communist party between 1944 and 1991. It was widely considered one of the most brutal and isolated regimes in history, responsible for the death of up to 25,000 people by way of execution, murder, starvation, and inhumane prison and forced labour camps. Thousands more were tortured, imprisoned, and persecuted.

During the last year, the Albanian prosecutor’s office failed to conduct any investigations into missing person cases from the communist regime, despite repeated warnings from international officials, the European Commission said in its recently published country report.

The Commission noted that this failure and the low number of resolved cases were “partly due” to a lack of capacity and resources. They called for political will to establish an efficient cooperation mechanism among relevant institutions and to enhance public awareness on the matter.

In terms of searching for the missing, many files have been deposited with prosecutors but there has been little progress on many of them. Several filed by the International Commission on Missing Persons Western Balkans Program have not progressed in more than three years.

Earlier this year, the head of the program, Matthew Holiday, said the Albanian government has a legal obligation to account for missing people.

Then in August, the OSCE said the fact that more than 6,000 people are still missing is a “serious human rights violation” that “deeply and incessantly affects the families of the missing who long for a grave to mourn their loved ones.”

Justice remains out of reach

Neither the Albanian state nor the Socialist Party – direct descendants of the communist party – have formally apologised for the atrocities carried out over 50 years.

There is no official memorial for victims, and students receive little information about what happened during those years. There have been few convictions of those who killed, murdered, and tortured innocent people.

Some prominent communists, including those who worked in the regime’s judiciary and official roles, still hold positions of power today. In 2020, Agon Tufa, a communist crimes scholar, was forced to seek asylum in Switzerland with his family, following what he described as threats against his life from ex-communists in power.

No interest from prosecutors

Following the EU call for justice, Albanian prosecutor Sokol Stojan told local media that prosecutors have no role to play in the case of disappearances or executions. He explained that this is because they “were punished according to the laws of the time” but admitted that some prosecutors have refused to address cases that land on their desks.

The prosecutor also said the statute of limitations makes it impossible for prosecutors to open investigations for disappearances that happened decades ago.

Prime Minister Edi Rama says his government has “done as much as we can” to bring to light the story of those that suffered during communism and continue to suffer today.

In an extraordinary speech given in August at the inauguration of an exhibition of former state security documents called “Sigurimi in its own words”, Rama said:

“All the stories of persecutions and tortures coming from the dictatorship, beyond just personal suffering, are stories of suffering embedded in the social conscience. In that of other generations, in those who were born during the communist period but were able to build another life, and in those who are born in the post-communist period and for whom communism is a story learned from books or the elderly, but not a fact of life.”

”We have tried to do as much as we can, although it’s certainly never enough to bring this story to light.”

While addressing the missing victims, he made no pledge to find them.

The voices of Albania’s missing

It seems the call of the EU will fall on deaf ears while there is a lack of political, judicial, and economic will in the country. Meanwhile, families of victims continue to suffer.

Sazan Velaj speaks with a mixture of both sorrow and anger.

“I was seven years old when they killed my father, we tried very hard but we could not find him. It is of great importance for the family, to find the bones of our father, there is nothing more important,” he said, adding “man is strong to survive such suffering.”