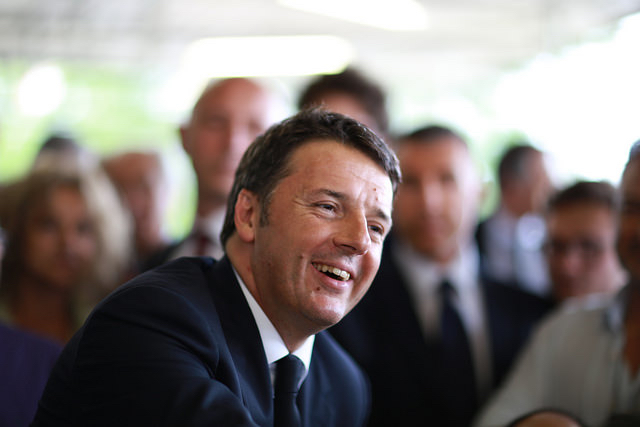 When his prospects were better: Matteo Renzi. [Francesco Pierantoni/Flickr]

French, German and Italian leaders are meeting today (22 August) on the island of Ventotene near Naples, opening a series of marathon diplomatic talks on the future of Europe. The Franco-German couple hopes to revive the EU project with a new political roadmap, EURACTIV has learned.

Talks on the future of Europe are lining up ahead of an informal European summit in Bratislava on 16 September, which will take place without the UK.

Center-left leaders will meet on 25 August in Saint-Cloud, and on 31 August, French President François Hollande meets European Council President Donald Tusk, also in Paris. Hollande and German Chancellor Angela Merkel will gather again on 2 September, for a dinner in Switzerland. And Greek Prime Minister Alexis Tsipras will greet the leaders of Southern Europe, including France, on 9 September, in Athens.

The objective of this diplomatic marathon is to find new political momentum for the EU’s 27 remaining members after Britain’s shock decision to leave the bloc in a referendum last June.

Tusk has himself embarked on a European tour to sound out the political mood in Europe ahead of the Bratislava summit.

Security has been identified as the first political objective.

In a symbolic move, the Italian, French and German leaders will meet for dinner on Monday evening on the Garibaldi aircraft carrier. The Italian ship is first and foremost a military vessel, but may also serve other purposes, like rescuing migrants in the Mediterranean.

While there is a shared will to fight terrorism, Europe is divided between Eastern European EU members who want to keep their borders shut and the big EU countries who want to regain control of the Schengen zone by stepping up controls at the bloc’s external borders.

The French-Italian-German trio wants to accelerate the setting up of a European coast guard, which should commence operations towards the end of the year. France is expected to contribute 170 people to this new body managed by Frontex.

Paris also supports the European Commission’s ETIAS project to introduce a system of paid visas for non-Europeans on the model of America’s ESTA system. Such a scheme would allow better screening for people seeking to enter the EU territory, supporters say.

Defence policy is the second priority identified for the Ventotene meeting.

For the EU’s founding countries, interest around defence policy has intensified following Britain’s decision to leave the bloc.

“Without the UK, we are losing some military capacity,” says a source close to the French President. “We have to bounce back in this area and reinforce”.

Until the UK’s decision to leave, Europe’s strategic autonomy was not really an issue for France, which relied on its own arsenal coupled with a strong cooperation with Britain. Indeed, the UK has Europe’s 2nd biggest army after France and its departure from the EU is leaving holes in the bloc’s defence arsenal.

Paris and Berlin would like to see more investment in research and are mulling a dedicated investment scheme for common defence projects.

Initiatives to relaunch economic growth only come as a third priority for the French and German leaders, with emphasis there placed on investment in digital, clean energy and sustainable agriculture.

But progress on the eurozone’s political and economic integration is not expected to progress at the Ventotene meeting, despite calls by François Hollande after the Brexit vote to push for social and fiscal harmonisation in the single currency bloc.

Indeed, any harmonisation in this area would entail levelling the playing field on ultra-sensitive topics like pensions or the minimum wage, which would almost inevitably involve lowering the bar in a country like France where social contributions are among the highest in the world. This does not appear to be a tangible solution ahead the Presidential elections next year.

This leaves the Franco-German-Italian trio with the option to strengthen the European Fund for Strategic Investment (EFSI), also known as the Juncker Plan.

François Hollande said on his Bastille Day speech that he wanted to see funding for EFSI doubled, an idea that should gain traction among several leaders in Bratislava, according to sources.

If EFSI has worked relatively well according to the Commission, the Juncker plan also helped identify unmet investment needs, therefore creating demand. But it has also increased inequalities, which is one of its perverse effects. With more mature and better projects presented, Northern European countries were the first to benefit, with France, the UK and Germany rounding up the bulk of EFSI money. Mediterranean countries and Eastern Europe, meanwhile, lagged behind.

Another refrain often repeated, the 27 should insist in Bratislava on the importance to be given to youth. Yet in practice, EU action in this area is far from satisfactory. The European Youth Guarantee Scheme that aims to offer young people under 25 an internship, training or job within six months, is for example not funded for 2016.

Here again, the EU stumbles due to a lack of resources, while its very survival lies primarily on young people’s adherence to the common project.