European Council President Donald Tusk has said he and US President Donald Trump have not found common ground on climate, trade or Russia in their first meeting. But they did agree on security and counterterrorism.

Trump’s EU debut this morning (25 May) lasted just around an hour and fifteen minutes. His meeting with Tusk and European Commission President Jean-Claude Juncker was weighted with scepticism, following the new US president’s disparaging comments about the EU earlier this year.

“I’m not 100% sure that we can say today, we meaning Mr President Trump and myself, that we have a common opinion about Russia. Although when it comes to the conflict in Ukraine it seems that we were on the same line,” Tusk told reporters after the meeting.

Trump and Juncker did not give press statements.

“My main message to President Trump is that what gives our cooperation and friendship its deepest meaning are fundamental western values like freedom, human rights, respect for human dignity. The greatest task today is the consolidation of the whole free world around those values and not just interests,” he said.

“Values and principles first. This is what we, Europe and America, should be saying,” Tusk added, echoing – whether intentionally or not – Trump’s campaign motto “America first.”

Trump has faced allegations about potential ties between Russia and his presidential campaign. A special prosecutor was appointed to investigate earlier this month. During his campaign, Trump said he would seek closer ties to Russian President Vladimir Putin, but he has expressed more critical views of him since becoming president.

Tusk told reporters, “I’m sure that I don’t have to explain why” the EU leaders agreed “first and foremost” on counterterrorism issues with Trump. 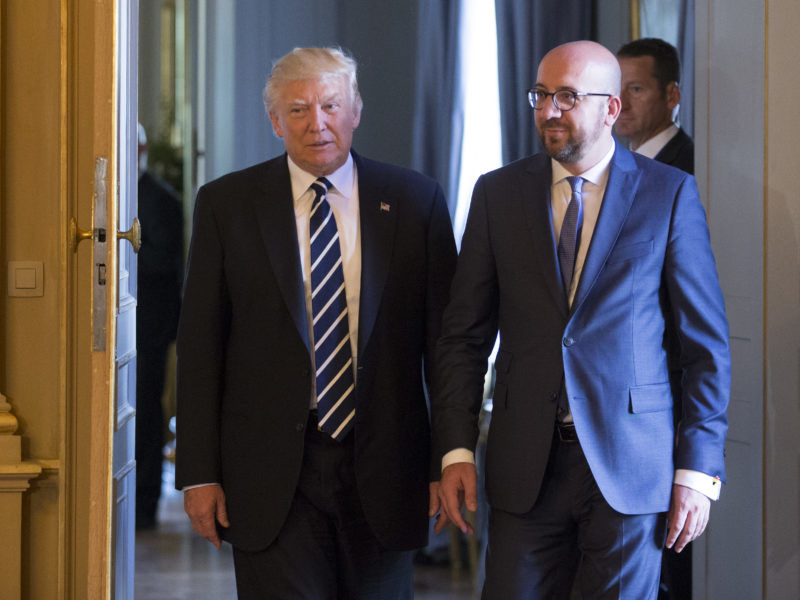 The Manchester bombing on Monday (22 May), which left 22 dead, has made for a pointed opening to the NATO meeting later today, where leaders from the alliance’s 28 member countries will discuss cooperation on security and terrorism.

Trump’s visit to the new European Council headquarters was a late add-on to his first trip abroad, which was planned around his visits to today’s NATO meeting and the G7 summit this weekend in Sicily.

EU officials set the bar low for meeting Trump. One senior EU official called it a success that the meeting took place at all.

Tensions between the EU institutions’ leaders and the Trump administration have flared recently over a number of US policies.

EU Migration Commissioner Dimitris Avramopoulos has held talks with officials from the US over restrictions on Polish, Romanian, Bulgarian, Cyprian and Croatian citizens who travel there.

US Secretary for Homeland Security John Kelly has stirred controversy in Europe by saying that he will review a visa-waiver programme that currently allows anyone from the 23 other EU countries to visit the US without a visa, arguing that EU citizens who have traveled to Iraq and Syria and become radicalised present a security threat.

Avrampoulos and EU Transport Commissioner Violeta Bulc have also held separate talks with top Trump officials over proposals to extend the US’ controversial ban on laptops in flight cabin baggage. US officials argue the ban is a needed security measure and that they have evidence suggesting terrorists could use electronic equipment in airplane cabins to attack flights. The EU Commissioners met with US officials recently in Brussels over the plans to apply the ban to flights coming from Europe.

Those recent issues come on top of broader concerns over Trump’s comments on trade and climate policy that have lingered since his election campaign, when his comments drew widespread concern in Europe.

Tusk underscored after this morning’s meeting that “some issues remain open, like climate and trade”.

He has repeatedly expressed his preference for trade agreements with individual countries and pulled the US out of the Trans-Pacific Partnership deal with Asian countries only three days after taking office.

TTIP, the EU’s embattled free trade agreement with the US, has been on ice since late last year and could have a bleak future under the Trump administration.

Issues left for G7 in Taormina

Leaders will discuss the 2015 Paris agreement on climate change at this weekend’s G7 summit. 195 countries signed on to the groundbreaking agreement to cap warming at two degrees above pre-industrial levels.

US Secretary of State Rex Tillerson said recently that the Trump administration has not yet decided whether it will withdraw from the agreement.

Trump will meet newly elected French President Emmanuel Macron today over lunch at the US embassy to the EU.

Macron will then meet with Juncker at the Commission’s headquarters, where they are set to hold a joint press conference.

Trump and Macron will reconvene at the NATO meeting this afternoon, where Trump will speak briefly when he commemorates NATO’s new headquarters with a memorial piece of the World Trade Center’s North Tower. He is not scheduled to make any other public statements while he is in Brussels.

The president’s first visit to Europe might have to compete for headlines with his predecessor. Former US President Barack Obama spoke at a panel discussion with Merkel today in Berlin, after the two met for breakfast.

“One of my favourite partners throughout my presidency is sitting next to me today. Chancellor Merkel has done outstanding work not only in Germany, but around the world,” Obama said.