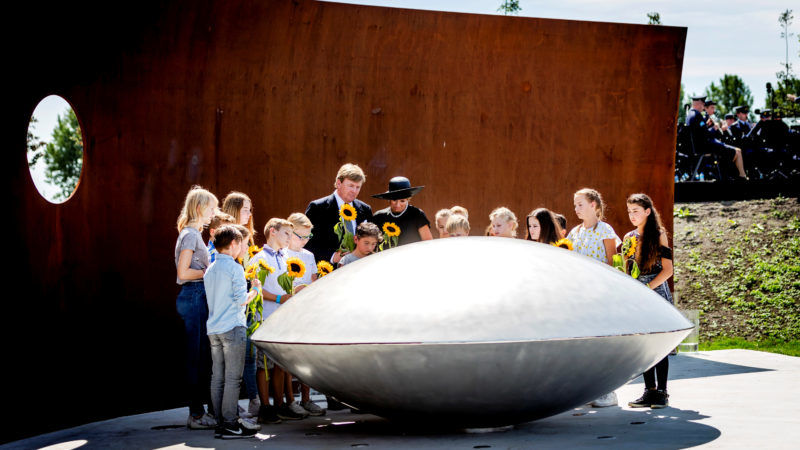 King Willem-Alexander and his wife Queen Maxima of the Netherlands attend an event to unveil a national monument to commemorate the victims of the Malaysia Airlines crash in Ukraine in 2014 in Vijfhuizen, Netherlands, 17 July 2017. [Reuters]

The Netherlands unveiled a national monument on Monday in memory of the 298 people killed in the downing of a Malaysia Airlines jetliner in 2014 above territory controlled by pro-Russian separatists in eastern Ukraine.

Victims came from 17 countries and included 196 Dutch citizens. The Netherlands took the lead in investigating the crash and intends to try those it considers responsible.

Authorities concluded the plane was shot down by a Russian-made ground-to-air rocket but have yet to formally identify suspects. Moscow denies any of its rockets could have been used.

The missile that brought down Malaysia Airlines flight MH17 over eastern Ukraine on 17 July 2014, killing all 298 people onboard, was fired by a missile launcher belonging to Russia’s army,  a report revealed yesterday (3 May).

On the third anniversary of the disaster, King Willem-Alexander, Queen Maxima and caretaker Prime Minister Mark Rutte unveiled the 25-metre-long monument in a park in the village of Vijfhuizen, near Amsterdam’s Schiphol airport.

A glistening steel structure shaped like an eye and set before a dark wall bears the names of the victims.

“If you look into it, you will see yourself and the name of your loved one,” Ronald Westerhuis, the sculptor who designed the memorial, was cited as saying in the Trouw newspaper on Monday.

“The steel is so polished it will reflect the sunlight onto the dark wall, in the hope that this will ease the sadness.”

3 years on, no justice for #MH17 victims and their families. My tick-tock of events (from 1st anniversary): https://t.co/W2nEey4dDT pic.twitter.com/iJHjCOYGz8