In a result swiftly hailed by eurosceptic groups, the Dutch news agency ANP said that with 99.8% of the votes counted the “No” camp had won the day with 61.1%. Only 38% voted in favour of the two-year-old treaty with Kyiv.

After initial doubts, ANP also projected that 32.2% of the electorate had turned out, passing the 30% threshold, meaning the ballot is valid and must be taken seriously by the coalition government of Prime Minister Mark Rutte.

The referendum is non-binding, but overlooking the voting results would be highly embarrassing for the government, and would provide ammunition to Dutch populists.

“It looks like the Dutch people said NO to the European elite and NO to the treaty with the Ukraine. The beginning of the end of the EU,” far-right Dutch MP Geert Wilders crowed late Wednesday.

Voters were asked if they supported the European Union’s association agreement with Ukraine, which aims to foster better trade relations with the war-torn country and former Soviet satellite.

But organisers admitted the non-binding ballot was essentially about pushing a broader anti-EU agenda – humiliating at the very time that the Netherlands holds the rotating EU presidency.

The vote was being closely watched by Europe and Moscow, and could prove an important yardstick only months ahead of the UK’s Brexit referendum in June.

The Netherlands is now the only member in the 28-nation EU not to have ratified the EU-Ukraine association agreement, which has already been given the thumbs up by both the upper and lower houses of the Dutch parliament.

Euromaidan was about EU association

Ukrainians took to the streets and ultimately ousted the then-President Viktor Yanukovich for his refusal to sign this same EU-Ukraine association agreement. The EU-Ukraine rapprochement which followed after the Euromaidan revolution led to an undeclared war by Russia against its neighbour, the annexation of Crimea, the occupation of Donbas by separatists, and at least 9,000 documented deaths. 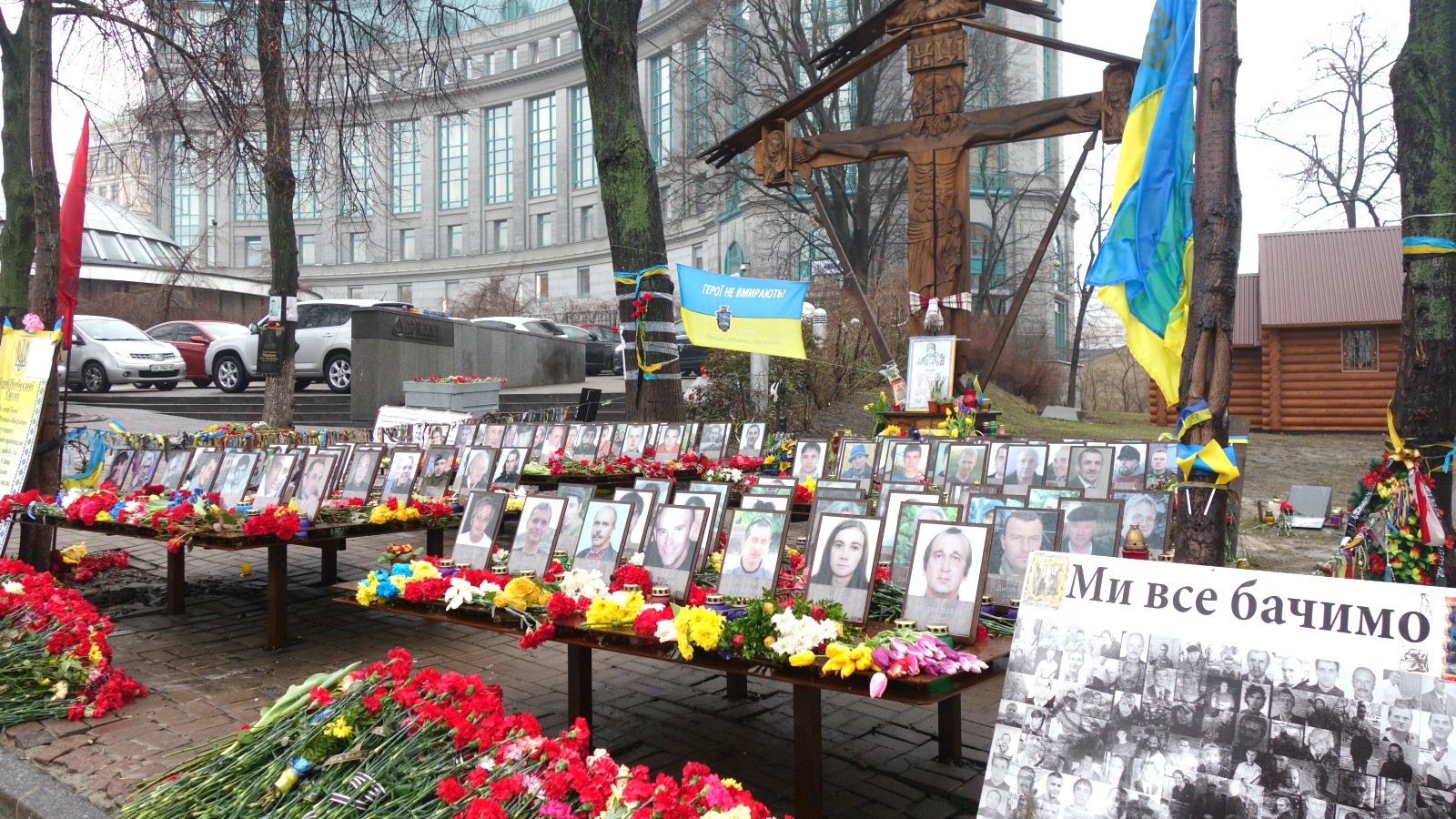 The memory of the ‘Heavenly Hundred’ preserved at Maidan. [Georgi Gotev]

These developments prompted the West to impose sanctions on Russia and to provide support to the government in Kyiv, who struggles to reform the country and re-orient its economy and trade toward the EU.

The Dutch “No” may pose a major headache for the European Union, as it also gears up for the ramifications of a possible British exit from the bloc.

Rutte agreed that “the ‘No’ camp won convincingly”.

And he was forced to concede that “if the turnout is above the (30%) margin then this accord cannot be ratified as is.”

He had earlier urged voters to vote in favour of the pact with Kyiv saying “we have to help Ukraine build up a judicial state and its democracy.”

It remains unclear what will happen next, with Rutte vowing a “step-by-step” approach in full consultation with the government and Brussels. Official full results are only due on 12 April.

The vote is non-binding. But it could mean that the coalition government – already under fire due to the refugee crisis – will seek to opt out of certain provisions of the EU-Ukraine deal to satisfy the voters.

Ukraine was expecting the Commission’s proposal for allowing visa-free travel for its nationals to the EU borderless Schengen zone. But such a decision needs a unanimous backing by the member states.

Ukrainian President Petro Poroshenko tried to reassure the EU on Thursday (17 March) that his country would soon overcome a political crisis that has rattled Western lenders, and he won support for Kyiv’s cherished goal of visa-free travel in Europe for its citizens.

The referendum result could also boost Wilders’s Freedom Party (PVV) which is already riding high in the polls due to his stand against refugees.

The leaders of the Netherlands’ six largest parties all agreed on Wednesday that the country could not just ratify the agreement with Ukraine.

“The accord cannot just be ratified. We have to take into account this ‘No’ vote,” said Diederik Samsom, the leader of the Labour Party, which is Rutte’s junior ruling coalition partner.

The “No” camp had highlighted concerns about corruption in Ukraine, and continuing separatist unrest in the east, among reasons to refuse closer ties with Kyiv.

The Panama Papers revealed that Ukraine’s President Petro Poroshenko’s confectionary company Roshen had set up an offshore company to avoid taxes, in August 2014, during a peak in fighting between Ukraine and pro-Russian separatists.

Ukraine had actively campaigned for a ‘Yes’ vote, acknowledging that Dutch citizens had also lost their lives in the crash of MH17, the Malaysia Airlines Boeing 777 that crashed on 17 July 2014, after being shot down over Eastern Ukraine by Russian-backed forces.

But the message appeared to have fallen on deaf ears.

“I voted against because I don’t think the accord is a good thing for the Netherlands,” said Nik Tam, 65, adding there were already “too many” countries in the EU.

Leave EU, one of the main pro-Brexit campaigns, proclaimed the Dutch ballot’s message.

“Nobody could accuse the Dutch of not being good Europeans, but they have no willingness to open their borders to more migrants and pick up the tab for Ukraine’s problems, just like most UK voters,” said Leave.EU spokesman Brian Monteith.

The vote was a signal to the British to follow suit, he said, adding: “The sun is now setting on the European Union.”

Richard Howitt MEP (UK, S&D), speaking from the 'Nieuwspoort' in The Hague, said:

"British voters should see how UKIP have been happy to directly intervene in the Dutch campaign on the same side as the far right, and how their dangerous sympathies with Vladimir Putin's Russia have been able to succeed.

"This referendum was never about vague concepts of European democracy or even enlargement, but about a specific agreement fairly negotiated by EU countries which supports democratic development in a neighbouring country which otherwise threatens to be a source of future conflict to us all.

"Dutch voters appear to have been apathetic or confused about the issues involved and many who support the EU chose to gamble on the minimum 30 per cent threshold not being reached, allowing the 'no' side to win on a low turnout.

"This is the lowest turnout ever on any referendum on the EU anywhere in Europe.

"The lessons for the British referendum must be that this vote has serious consequences, that not voting allows extremism to prosper, but that this time the country whose future is at stake isn't several time zones away but right here at home."

Commenting on the implications of the vote for the European Union, Howitt added:

"The vote will call a halt on support democratic development in a country which was escaping its Soviet past and gives a major filip to today's Russian military expansionism.

"It is likely that the Dutch Government will seek to get a renegotiation of the agreement to explicitly rule out that it can be interpreted as a step towards future EU membership.

"This will make little practical difference but will question Europe's good faith in other negotiations and give an unwelcome boost to those who would break-up the EU altogether.