Russia’s foreign minister on Thursday (26 November) accused the West of interfering in Belarus as he met strongman leader Alexander Lukashenko who has faced months of protests over his disputed re-election.

Sergei Lavrov held talks with Lukashenko and other top officials in the capital Minsk, in the latest show of Russia’s support for authorities in its ex-Soviet neighbour.

Thousands of protesters demanding Lukashenko’s resignation have taken to the streets of Minsk every weekend since the 9 August election that saw the 66-year-old claim a sixth term in office.

Protesters believe political novice Svetlana Tikhanovskaya, 38, who took her jailed husband’s place in the presidential race, was the true winner.

Moscow has continued to back Lukashenko since the protests erupted, with several meetings between senior officials from both sides in recent months.

Speaking at a press conference with his Belarusian counterpart Vladimir Makei, Lavrov accused the United States and several European countries of “gross interference” in the domestic affairs of Belarus.

Western countries are employing technologies of organizing mass riots in Russia and Belarus, while their officials set ultimatums against Moscow and Minsk, Lavrov said, as quoted by the Russian agency TASS.

“Russia and Belarus are under pressure aimed at changing our stance and limiting our countries’ development. The Western media and officials voice nearly ultimatums against us. There have been too many facts of meddling in domestic affairs. They are using the technology of organizing mass riots, and the opposition gets financial and other support,” Lavrov went further.

In this situation the West is playing “a game without rules” style, Lavrov noted. “Without giving any evidence they are slapping unilateral sanctions. The work of cooperation formats, which had been built for years, is frozen,” Russia’s top diplomat said.

Several Western leaders have refused to recognise the results of the election and voiced support for Tikhanovskaya, who fled to EU member Lithuania shortly after the vote.

The European Union has slapped sanctions on Lukashenko and a number of his allies citing election rigging and a violent police crackdown on demonstrators.

The European Parliament passed on Thursday a tough resolution on Belarus, in which MEPs rejected the results of the 9 August election and asked for new, free and fair elections in accordance with international standards.

Parliament condemned in the strongest possible terms the murder of Raman Bandarenka in Belarus, and expresses its condolences to his family and to all families who have lost loved ones as a result of the repression of Lukashenko’s regime. 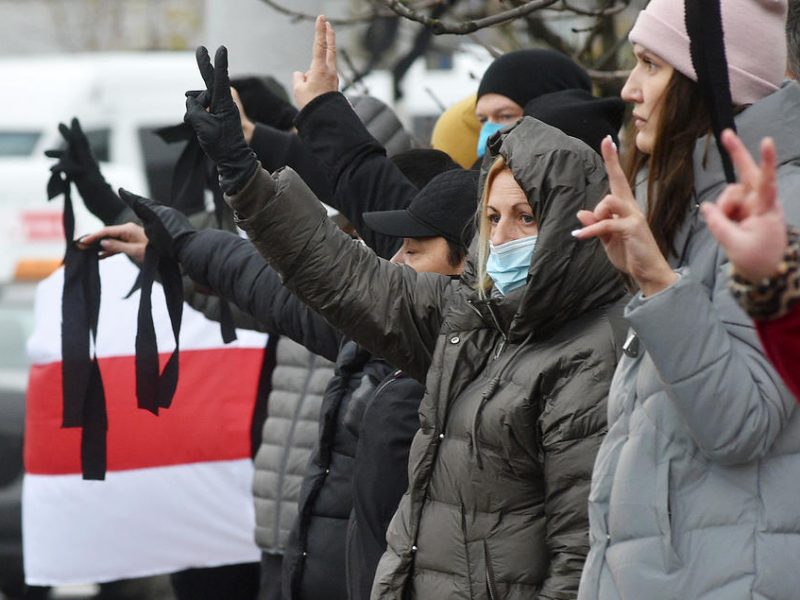 Bandarenka, a 31-year-old art teacher, was brutally beaten on the evening of 11 November by a group of plain-clothed men in masks who reportedly had close ties to the regime. He was taken into detention where he was subjected to further beatings. He later died as a result of his injuries.

MEPs demand prompt, thorough, and independent investigations into his death, and more generally, for the EU to lend support to an international investigation of crimes perpetrated by the Lukashenko regime against the people of Belarus. They also called on the Commission to increase its assistance to independent media in Belarus.

The resolution highlights that actions taken so far by the EU and the member states against the Lukashenko regime “are insufficient” and welcomed the Council’s decision to work on a third package of sanctions aimed at firms and oligarchs with ties to the regime.

The text was adopted by 613 votes in favour, 41 against and 35 abstentions.

The European Parliament is often adopting tough texts, on the initiative of individual MEPs or of party groups, but it is more than obvious that key member states have no stomach to rock the boat in Belarus. France keeps on advocating good relations with Moscow, while traditionally anti-Russian Poland is losing its clout as it is vetoing the EU budget.