Supporters of candidate of main opposition Republican People's Party (CHP) for Istanbul mayor Ekrem Imamoglu hold Turkish flags during a rally after the local elections in Istanbul, Turkey, 8 April 2019. According to preliminary results, CHP candidate for Istanbul mayor, Ekrem Imamoglu, beat the AKP candidate Binali Yildirim, by 25,000 votes in what was viewed as a blow to President Recep Tayyip Erdogan's grip on power, as the ruling party, an Islamist conservative outfit, also lost the capital, Ankara. [Erdem Sahin/EPA/EFE]

Speaking to reporters on his plane, returning from a trip to Moscow this week, Erdoğan said that regulations requiring that ballot box officials be civil servants had not been met everywhere, with regular workers placed in charge in some places.

“Our colleagues have established this. Naturally all this casts doubt. If they take a sincere view, this will lead to annulment,” he said.

Any decision to annul the elections would rest with the High Election Board.

A senior AKP official said on Tuesday it would demand a new vote in Istanbul after its bid was rejected for a citywide recount of the 31 March election results after a series of recounts since the vote. 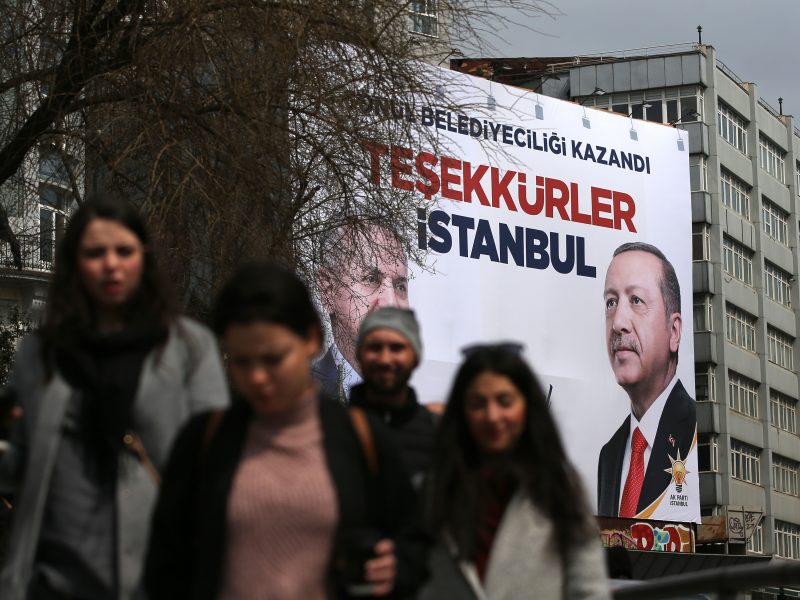 Erdogan's AK Party to seek recount of all Istanbul votes

Erdoğan said on Monday the local elections were marred by “organized crime” at ballot boxes in Istanbul. The loss of control in the city would be a setback for Erdoğan, who has dominated Turkish politics for more than 16 years.

One response to “Erdogan calls for annulment of Istanbul election”