The backlash against President Emmanuel Macron’s comments on Islam intensified Sunday (25 October), with Turkish President Recep Tayyip Erdoğan again urging him to have “mental checks” and protests in Muslim-majority nations.

The French foreign ministry meanwhile called on authorities in affected countries to ensure the security of French citizens.

It described some social media calls for protests as “heinous”, lamenting manipulations “by a radical minority” and dubbing nascent boycotts of French goods “groundless”.

Speaking after teacher Samuel Paty was beheaded for showing caricatures of the Prophet Mohammed to pupils in a lesson on free speech earlier this month, Macron vowed France would “not give up cartoons” and said Paty “was killed because Islamists want our future”.

But Erdoğan on Saturday urged Macron to have “mental checks” for treating “millions of members from different faith groups this way” – comments which prompted Paris to recall its envoy to Ankara.

The Turkish leader doubled down on Sunday, again contending that Macron “really needs to have checks” and this time also accusing him of being “obsessed with Erdoğan day and night”.

Macron later took to Twitter to say, “We will not give in, ever,” insisting that his country respects “all differences in a spirit of peace.”

“We do not accept hate speech and… will always be on the side of human dignity and universal values,” he added.

Macron’s Tweet, which was also made available in a translated Arabic version, was followed by angry reactions and insults from self-proclaimed defenders of Islam.

Relations between Macron and Erdoğan have become increasingly strained over geopolitical issues ranging from a Greek-Turkish maritime dispute to the conflict between Armenia and Azerbaijan.

The European Union’s top diplomat, Josep Borrell, called the comments Erdoğan made on Saturday “unacceptable” and urged Turkey “to cease this dangerous spiral of confrontation.”

Anger at Macron has spilt over into the streets in several Muslim-majority countries.

Boycotts of French goods were underway in some nations, including by supermarkets in Qatar and Kuwait, with calls to spurn French products in several other states.

Demonstrators held protests Sunday in regions of war-torn Syria still outside government control and burnt pictures of Macron, according to the Syrian Observatory for Human Rights war monitor.

Around 70 people protested in the Libyan capital Tripoli, an AFP correspondent said. Some set fire to French flags and stamped on pictures of the French president.

“As Muslims, it’s our duty to respect all the prophets, so we expect the same from all other religions,” housewife Fatima Mahmud, 56, said ahead of the Tripoli protest.

“Demonising Islam and Muslims isn’t going to keep the social peace in France.”

He tweeted that the French leader “could have put healing touch & denied space to extremists rather than creating further polarisation & marginalisation that inevitably leads to radicalisation.”

In Deir al-Balah in the Gaza Strip, Palestinians burnt portraits of Macron, calling his remarks “an attack and an insult against Islam.”

“We condemn the comments of the French President… and whoever offends the Prophet Mohammed, whether through words, actions, gestures or drawings,” said Maher al-Huli, a leader of Hamas, the Islamist movement that runs the coastal Palestinian enclave.

In Lebanon, pro-Iran Shiite movement Hezbollah condemned the “deliberate insult” to the Prophet.

In Iraq, Rabaa Allah, a powerful pro-Iran armed faction, said in a statement that one and a half billion people worldwide had in effect been insulted, and warned that its men were “ready to respond when and where they want”.

Jordan’s Islamic Affairs Minister Mohammed al-Khalayleh said that “insulting” prophets was “not an issue of personal freedom but a crime that encourages violence.”

His comments came as French prosecutors Sunday said two Jordanians had filed a complaint with police after an apparently racially motivated attack in the city of Angers. 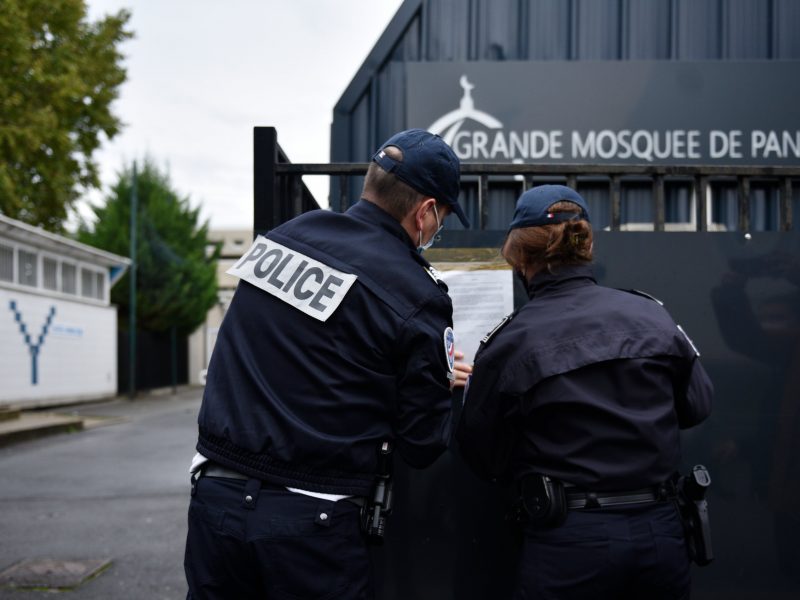