Supporters of Istanbul Mayor Ekrem Imamoglu cheer as they wait for him during a protest against the rerun of Istanbul elections in Istanbul, Turkey, 6 May 2019. [Erdem Sahin/EPA/EFE]

The new Istanbul mayoral contest will be held on 23 June, YSK said in a statement late on Monday (6 May).

Mayoral candidates from both the President Recep Tayyip Erdoğan’s AKP and the main opposition Republican People’s Party (CHP) will contest the election on 23 June.

The YSK verdict came amid growing tension between the ruling AKP and the main opposition CHP. 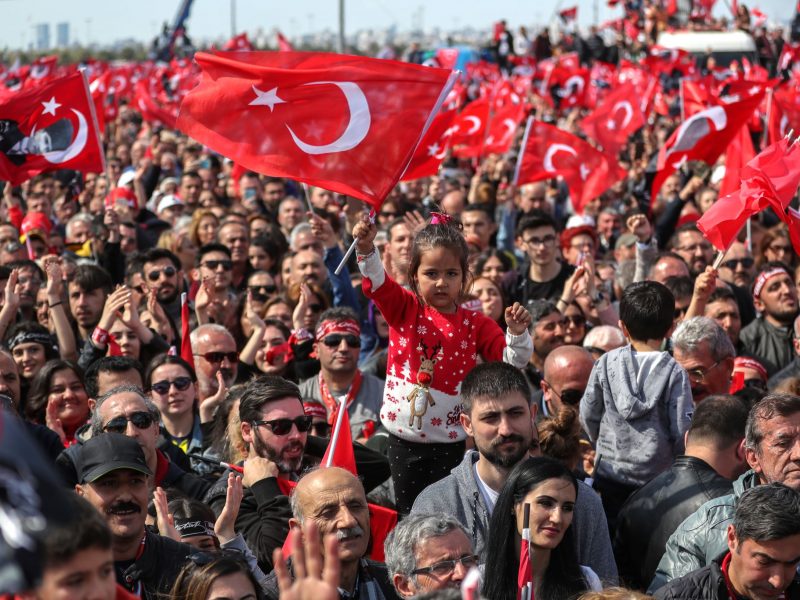 Turkey’s highest electoral body is expected to rule in the coming hours on the appeal by President Recep Tayyip Erdoğan’s AKP party, for a re-run of the Istanbul local elections, five weeks after a stunning opposition victory in the city.

The CHP, which narrowly won the mayor’s office on March 31, called the ruling a “plain dictatorship.”

“It is illegal to win against the AK Party,” CHP Deputy Chairman Onursal Adıgüzel said on Twitter. “This system that overrules the will of the people and disregards the law is neither democratic, nor legitimate.”

Ekrem İmamoğlu, the CHP mayor who officially took office after a smattering of recounts were completed across Istanbul last month, condemned the YSK for annulling the results under AKP pressure.

“Shame on the YSK. They were placed under political pressure from day one,” İmamoğlu told hundreds of chanting and flag-waving supporters.

“With the same boards, you elected the President in the June elections last year, you hold referendum and the constitution changed. The constitution is then also under suspicion. If you don’t think it is questionable, I know that Istanbul elections are as halal as the milk of my mother,” he said.

EU High Representative Federica Mogherini and European Commissioner Johannes Hahn underlined in a statement late on Monday, that ensuring a free, fair and transparent election process is essential to any democracy and is at the heart of the European Union’s relations with Turkey.

“The justification for this far-reaching decision, taken in a highly politicised context, should be made available for public scrutiny without delay,” they said.

Kati Piri, the European Parliament’s Turkey rapporteur, said the decision ends the credibility of democratic transition of power through elections in the country.

Erdogan does not accept defeat and goes against the will of the people. AKP pressured YSK to re-run local elections in Istanbul. This ends the credibility of democratic transition of power through elections in Turkey.

The Turkish lira weakened and fell to 6.1075 against the dollar at 1730 GMT, on track for its worst day in more than a month.

The currency has tumbled more than 10% since the week before the initial election. Suspense over the ruling had left investors worried that weeks of additional campaigning would divert funds and attention from addressing economic reforms.

Inflation near 20% and unemployment close to 15% drove many voters to abandon the AKP in the first vote. Before the second vote, tensions with the United States could escalate over Turkey’s planned purchase of a Russian S-400 missile defence system, which could trigger US sanctions.

As the events unfolded

The polls held on 31 March have become one of the most controversial Turkey’s political history due to its unexpected setback for the government.

The AKP lost control of the capital Ankara and Istanbul, the country’s biggest city, for the first time in 25 years.

The President’s AKP and their nationalist MHP allies immediately refused to recognise the CHP’s victory, citing irregularities that impacted the outcome.

In its interim ruling on the objections, the YSK ordered district electoral officials to inspect their respective polling station officials. Prosecutors also launched probes into the alleged irregularities, calling 100 polling station workers in for questioning as suspects.

In a statement at the weekend, President Erdoğan called for a re-run of the mayoral election in Istanbul, backed by the MHP.

“Correcting the corruption in the elections would vindicate the YSK and relieve the hearts of the Turkish people,” said Erdoğan.